I don’t know about anyone else, but I’m tired as hell of all Covid all the time. We know it’s serious for people with underlying conditions, and we’re taking necessary precautions, but we also know someone who had Covid as early as Christmas and didn’t even know it. He also didn’t infect any of the other family members who gathered to celebrate the holiday at the time he was ill. In other words, we aren’t all going to die! 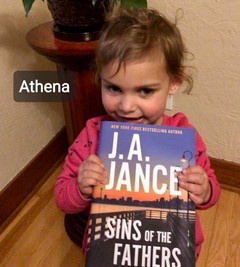 Instead, I thought that this morning I’d send along a bit of good news. If you’ve glanced at that little piece of sunshine smiling out at you from behind the cover of Sins of the Fathers, you may be wondering if she’s one of my grandchildren. Nope, but she’s a special little kid, and this morning I have permission to tell her story. And for those of you who have always wondered where get my ideas? Stay tuned.

Three and a half years ago, when Bill and I came back from a sojourn in Arizona, our then seventy-one year old personal trainer, Dan, showed up on our doorstep with an infant in an infant carrier in one hand and a diaper bag in the other. Does this sound like deja vu? If you’ve read Sins of the Fathers, it should, because it’s pretty much word for word what’s in that opening scene when Alan Dale shows up on Beau’s doorstep with a newborn baby in hand.

During our workout session, Dan told us that his drug-addicted daughter had given birth to a drug addicted baby, stayed around long enough to name her Athena, and then bailed from the hospital leaving her newborn behind. Dan spent weeks in the hospital nursery, rocking the baby as she went through the agonies of drug withdrawal. Then, unwilling to send her into the “system,” he managed to have himself appointed to be her temporary legal guardian and took her home. BY HIMSELF!!!!

Dan is divorced and lives alone. When we saw him a month or two later, he was a shadow of his former self but the baby was just fine. His face was gaunt. His clothes hung off him. There were dark circles under his eyes. Two weeks into the process, barely getting three hours of sleep a night, he told Athena’s aunty, Jessi—the biological father’s sister—that he didn’t know how he was going to make it. A day or so later, Jessi, a twenty year-old living in Eastern Washington near her parents, stepped up to the plate by calling to say, “I’ll take her.”

There are plenty of twenty year-olds out there these days who couldn’t handle taking in a puppy, much less a baby, but that was the beginning of Dan’s now almost four year-long quest to make suitable arrangements for Athena, first in terms of a legal guardianship and finally an adoption.

First off, calling the foster care nightmare a “system” is giving it way too much credit. It’s a chaotic mess. The easy answer for too many social workers is to return the child to the parents even if they happen to be drug-using addicts living in their cars! Dan’s response to that was: “No way in hell!” Over and over.

There was one scheduled court appearance after another which neither parent actually bothered to attend. As the case dragged along, it’s been complicated by the fact that the biological parents aren’t actually husband and wife. The mother is still married to someone else, a guy who’s been locked up in the slammer with no visitors since long before Athena was conceived. The realities of simple biology aside, as far as the social workers were concerned, he was the presumptive father and needed to sign off on his “parental rights”—something he had zero interest in doing!

And all this time, Dan, with the tenacity of a bulldog, has tried his best to make an unworkable system work. Fortunately, he’s kept a paper trail of all his interactions with the social workers who were great at stalling but not so great at anything else.

When a hearing two weeks ago was canceled because the social worker didn’t show, Dan sent his paper trail—including details concerning the non-father’s prison status—up the chain of command, and finally something happened. The result? Somebody finally noticed there was a problem with the “system.” At yesterday’s hearing the judge ordered that Athena’s adoption can proceed on a closed basis with NO CHANCE OF PARENTAL REUNIFICATION!

Dan told us this morning that he feels as though a hundred pound weight has been lifted from his shoulders. Today Athena is at Lake Couer d’alene with her mommy and her new dachshund puppy, Woody.

Obviously, if you’ve read Sins of the Fathers, you know that although the real Athena’s situation may have provided the inspiration for the book, the two stories diverge in many ways. Still the two Athenas, one real and one make believe, have something very important in common. In terms of grandfathers, with Dan in one of their lives and with Beau and Alan Dale in the other’s, they are BOTH very lucky little girls.

And in each case, the good guys won.

28 thoughts on “The Good Guys Won”