As I write this on Wednesday afternoon, I’m preparing to venture out on a Girl’s Night Out tomorrow evening.

The first one of those I ever attended was while we were still working on the reservation. A bunch of women from school went into Tucson Friday night where we planned to have dinner followed by a round of bowling. It didn’t work out very well. At the very end of the meal, one of the ladies—using the term loosely—demanded separate checks. That put a real “gar in my greet” as Evie would have said, and things didn’t improve after that. Eventually two of my pals, Patsy and Loretta, and I bailed on bowling altogether and ventured across the street to a bar where we indulged in several adult beverages and had lots of fun.

This happened to be on Columbus Day. A young airman from Davis Monthan was particularly taken with Loretta who was a Quinault by birth, a Tohono O’odham by marriage, and most definitely a dish. When he made a pass at her, she looked him straight in the eye and said, “You know, if we’d a sunk that Mayflower when it first showed up, we’d a never have had any of this trouble.” It was a joke, of course, especially when the young man walked away shaking his head in dismay. Times have changed a lot since them. It’s likely that I’ll be pilloried as being a racist for a: passing it along or b: considering it a joke or: c: both of the above. So be it.

Once the evening ended and the bowlers came to drag us out of the bar, the evening did not improve. The bowlers’ noses we all out of joint, and the three of us were still having too much fun. The ride out of town was edgy at best. When we arrived at my turnoff, thirty miles later, the lady who was driving the car offered to take me all the way up to the house—two miles of dirt road. “No thanks,” I said. “Just drop me off here. I can walk.”

When I bailed out of the car, so did Patsy and Loretta. As I recall, we walked the two miles in plenty of moonlight, singing bawdy songs as we went. Jerry Janc was not at all thrilled when he was rousted out of bed by three over-the-limit females to do the sixty-mile round trip drive necessary to drop two of them off at their respective houses.

So that’s one kind of Girls Night Out. But tomorrow’s event will be again, as Evie would say, “a white horse of a different color.” This will be the Savor the Season dinner at my daughter’s church.

It’s a fairly large church. For this event, chairs in the sanctuary are replaced by sixty or so banquet tables, each of them decorated to the nines with holiday cheer provided by that table’s hostess. It truly is a winter wonderland. The attendees are all women, young and old, and none of them will be doing the cooking. A specially designed buffet is set up. Packets containing family-sized recipes for each dish are given to every guest. Church menfolk do all the serving—and that’s the whole point.

Back the sixties when bra-burning was in its heyday, planning and delivering the holiday cheer nevertheless continued to be considered women’s work, and not much has changed on that score in the meantime. In most families, the womenfolk are still the ones who plan and organize holiday meals and gatherings. It used to be that Thanksgiving was the only meal I cooked each year from beginning to end. Things are a bit different now, and a set of spareribs are slow cooking in the oven a 250 degrees while I work on the blog. But I’ll be cooking Thanksgiving dinner this year, too.

Savor the Season is designed to give the “fairer sex” time to take a deep breath before the starting gun announces the official beginning of the sprint race that will take us all through the complexities of the holiday season and on to the end of the year.

As I said, this is a church event. No adult beverages will be served, and any singing we do will be of the Christmas Carol variety. And yes, there will be a message—delivered by Pastor Cheryl. Her sermons are always memorable. One year, each guest received a replica of a key from an old black-and-gold Underwood Typewriter. It was meant to be a reminder that, when things get tough, it’s always a good idea to find your backspace. That’s one that has been especially meaningful to both my daughter and me, and when we exchange texts that contain nothing but a backspace, it helps each of us take a step back.

I have no idea what the message will be tomorrow night. In these days when rancorous politics seem to have impacted every aspect of our lives, lots of people may be in need of exercising their backspace during holiday family gatherings.

So I’m including one here. That way, if you need one during events in the course of the next month or so, you’ll know just where to find it. 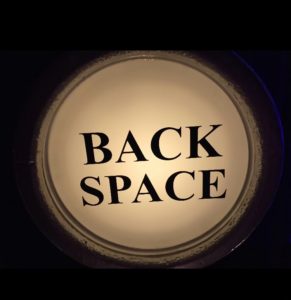