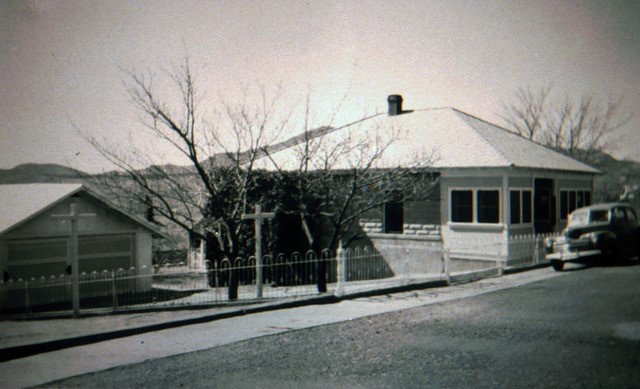 In a flurry of photos shared in a familial group e-mails this past week was this photo of our home on Yuma Trail in Bisbee, Arizona.

My folks pulled up stakes and left the farm in South Dakota on the second of January, 1949. It was twenty-two degrees below zero on the day we left. They had to use a team of horses to drag our ’49 Ford and the trailer behind it out to the county road. The trailer held our worldly goods, including the 300 quarts of canning my mother had put up the previous summer. It also included the EasySpin clothes washer my mother had won in a raffle at a county fair years earlier. She hadn’t been able to use it on the farm because there was no electricity, but they brought it along “just in case.” My father often said that he had to dodge highway scales on the trip because the trailer was severely overloaded.

I was four years old at the time. Riding in the backseat with my two older sisters, I have no recollection of how cold it was, nor do I remember the five days we were snowbound in Enid, Oklahoma. But I have a distinct recollection of the March day, two and a half months later when we moved into the house in Bisbee. I don’t know if you can make out the wrought iron fence in the foreground, just in front of the clothesline my mother would use at least twice a week for the next twenty or so years. But back to that fence. I was a kid. I didn’t have to concern myself with moving furniture or unpacking. I went out into the yard and grabbed two of the uprights on that fence. I remember hanging there, looking up at the clear blue sky and feeling the sun all over my body. That was the beginning of my long love affair with Arizona. I didn’t consciously remember how cold it had been back on the farm, but I loved how warm it was on that March day.

At the time, Bisbee was something of an oasis. Every house had two water systems—house water and yard water. The yard water was pumped out of the mines and was free to use. It contained all kinds of mineral content and the trees and grass loved it. Somewhere there’s a photo of me sitting next to my dad along with two bushel baskets of apricots picked from the two trees at the top end of the clothes line. On the far side of the house were peach trees and out back were two fig trees. The house didn’t have a cooler of any kind, and so every summer, generally on the hottest days of the year, my mother was in the kitchen overseeing the canning of quart after quart of peaches and apricots.

The house itself was constructed of blocks with a wooden porch and two sleeping porches attached to the front. I’ve mentioned previously that the house was only a two bedroom. With seven kids, that was a logistical challenge, and for years my folks discussed incorporating the front porches into the house itself and creating a third bedroom. But for a very long time, that’s all that happened—talk. With my father in the construction business, the long delayed remodel was an issue. I recall my mother making pointed remarks about the “shoemakers’s shoeless kids.”

And then one day, when I was in third grade, my mother hit the wall—in every sense of the word. Third-graders got out at 3:30 in the afternoon. My younger brother, Arlan, was in kindergarten, and they got out of school at 11:30 in the morning. When I got home that day, I found my mother, dressed in a pair of my father’s cover-alls, wielding a crow-bar and sledge hammer. Once Arlan came home from school, Evie and he had totally demolished the block wall between the porches and the rest of the house. With that the much delayed home remodel was officially underway. The wooden sleeping porch on the far side of the photo became the “third bedroom” which I shared with my younger sister, Jane. Later on my father and my mother’s father, Grandpa Anderson, went to work on the unfinished basement and created a one-bedroom apartment downstairs.

My folks paid cash for the house and lived in it until after I graduated from college. Eventually Phelps Dodge began running mine water through the tailings dump to leach copper out of the waste dug from the mines. At that point free yard water went away. As a consequence so did most of the fruit trees and grass in town. The plant life that had thrived on the mineral rich mine water, withered and died on the clean drinking water which was also, in many cases, prohibitively expensive.

I know many of my fans who have visited Bisbee have taken the Lavender Jeep Tour and driven past the house on Yuma Trail. The current owner keeps a flock of chickens in the yard. The place is pretty much a derelict now, but I wouldn’t be surprised to learn that the metal cabinets my father installed in the kitchen in the Fifties are still there. Outside the place is a virtual junk yard. The driveway pavement has disintegrated. The two car garage is still standing, but I suspect it’s most likely filled with junk as well. I remember the garage mostly because of its grease pit which was covered by a lid of loose heavy planks. That’s where I directed my three younger brothers, all of them armed with wooden swords, to reenact the poem our father often read to us—Horatius at the Bridge.

With the enemy bearing down on Rome and with only one bridge over the Tiber separating the city from certain destruction, a gatekeeper named Horatius stepped up and said:

“In yon strait path a thousand
May well be stopped by three.
Now who will stand on either hand
And keep the bridge with me?”

The three of them did just that, stalling the enemy with sword play while the citizens of Rome demolished the bridge.

In my garage reenactment, the six-foot deep concrete grease pit served as the Tiber River. Three planks, with all the others removed, served as the bridge. My, mother, the only member of the audience, sat there cool as a cucumber while her three sons duked it out on “that yon strait path!” I realize now, Evie Busk had nerves of steel.

The house on Yuma Trail isn’t at all what it once was, but it’s the place where Norman and Evie Busk gave all seven of their kids a solid foundation in what was right and what was wrong. It’s where we were taught the value of hard work. It’s where we sat around the kitchen table as a group doing homework while our mother made dinner. It’s where we spent hot summer days going barefoot in the grass and using a push mower to mow the steep lawn.

Even though it’s not possible to go home again, I’m glad to have this photo. Seeing it has brought back many happy memories, and I’m guessing this story is reminding some of my readers of the homes in which they, too, came of age. Life was different back then, and I’m grateful to have lived in that time and place.

It is gone but not forgotten.