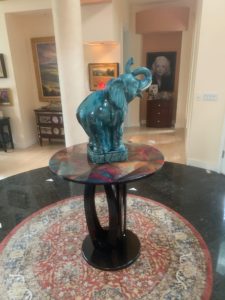 Forty years ago, in 1982, when I sat down to write the first Beaumont book, I thought I was writing a stand-alone book. I had no idea that Avon Books would buy that book as the beginning of a series, and I certainly had no inkling that all these years later I’d be looking forward to the publication of Beaumont # 25, Nothing to Lose.

Years ago, at an event in downtown Seattle, a woman mentioned that she got out of bed each morning, put on some clothes, and then went straight to the gym. At that time, I thought she was pretty weird. Now that thought has come back to bite me in the butt, because I’m the same kind of weird.

Walking 10,000 steps takes at least an hour and a half of my life—every single day. Inside steps take longer than outside steps—34 minutes per mile as opposed to 28. There are lots more turns in my inside-steps route than the outside ones on our front driveway.

In the beginning, I could only walk a thousand steps or so without stopping to rest. Now I can do 7,000 or 8,000 in a row and still come up smiling.

It has not been easy to write during the pandemic. The lockdown combined with the constant barrage of bad news on all fronts tend to wear down psyches and eat away at creativity. I’ve struggled more with the book I’m writing now than with any other, but I’m still working. Through it all, walking has helped me maintain my sanity. It’s my daily prescription of self-help, and, as my mother, Evie, always used to say, “God helps those who help themselves.”

I’m 76 going on 77, as opposed to 16 going on 17. I’m well aware that, for one reason or another, walking isn’t a possibility for far too many people my age, and no doubt my walking days are numbered, well, but what I’m encouraging my readers to do today is this: First, turn off the news! Do something on a daily basis that helps your head—something just for you; something that makes you happy. If it’s crocheting or knitting, do that. If it’s painting, do that. If it’s swimming, do that. If it’s reading do that. And if people think you’re weird, so be it.

My daily stress antidote is walking. There is nothing magic about getting those 10,000 steps. That’s an arbitrary goal—a line in the sand, as it were. In my natural state, I walk less than 2000 steps a day. I know that for sure because, once I get my ten, I usually don’t add on more than another two, I suspect that some of you are like that, as well—in the under-two crew.

So, count off a few lap locations inside your house, walk around them, and keep track. You don’t have to go to a gym, and you can do it in your PJs. We have a very private lot. Earlier this week, when I got overheated doing inside steps, so I put on a hat, went outside, and finished walking with driveway steps done in my robe.

When you add a few steps to your usual count, you’ll be doing your body a favor and your head, too.

And one more thing: Know the score, keep the score, report the score. The score will improve!