First off, thanks to all of the fans who broke out of quarantine long enough to buy books, Credible Threat made it to # 40 on the USA list. We may have missed the NYTimes list, but so what? Win some/lose some. So thank you one and all. 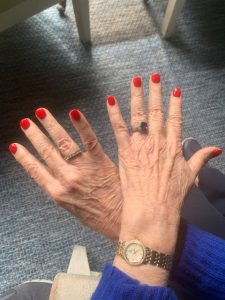 I’ve been home again all this week, responding to emails, trying to get the next book to come to order, and mostly just waiting out lockdown. As of tomorrow, I will finally have my first mani-pedi since February. Hooray for Big Apple Red, and I’m so glad Andy’s Nails in Bellevue is finally open again!

But I’ve also been corresponding with my family email group and, as it happens this week has brought to light a happy/sad anniversary of some forty-eight years standing.

When our folks pulled up stakes and moved us lock, stock, and barrel from South Dakota to Arizona, we didn’t really look back. We returned there for visits, of course—summer vacations, funerals, and weddings. Most of the rest of the relatives stayed put in northeastern South Dakota—around Summit, Marvin, and Watertown, while some migrated to Rapid City in the western part of the state while others went so far out of bounds as to move all the way to … well … Minnesota. Two of my mother’s sisters, my aunts Alice and Helen (aka Toots) and their families settled in Rapid where Alice opened a pancake house on the banks of Rapid Creek, the Little Red Hen, and Toots and her husband, Clarence owned the Lake Park Motel nearby.

In June of 1972, my mother and younger sister, Janie, traveled to South Dakota to Milbank for my cousin’s wedding which was scheduled for June 10. I was working a twelve-month contract on the reservation in 1972, so my going wasn’t an option, but my mother and my younger sister, Janie went. So did Alice and Toots, my aunties from Rapid City—Alice as a guest and Toots as the officially appointed wedding singer.

The weather in northeastern South Dakota was fine. The weather in the western part, and most especially in the Black Hills, was not. There it had been raining for days. A new storm hit the area on Friday afternoon, and over the course of several hours it dumped fifteen inches of rain over the watershed that drained into Rapid Creek. Flash flood warnings were issued, but I don’t think anyone had the slightest notion of how bad it would be. Early in the evening and with Toots out of town, Clarence and their eleven-year-old son, Steve, drove by the motel to check things out. With everything seemingly fine, they drove back home and went to bed.

Shortly thereafter, all hell broke loose when the Canyon Dam upstream collapsed under the fifteen-inch onslaught that fell between 5 PM and 9. A huge wall of water came crashing down Rapid Creek. Clarence woke up, looked out the bedroom window, and saw houses with lights in them seemingly floating by. It took him a moment to realize that if they still had electricity, their house was the one that was floating. He got Steve up and dressed. Pithing minutes they were treading water in the kitchen. They tried climbing onto the floating fridge, but that was too precarious. At some point, Steve’s right arm and head were trapped between the fridge and wall. Clarence managed to use a two-by-four to pry him loose. A few moments later, something hit Clarence and temporarily knocked the breath out of him. His sudden silence terrified Steve, but he came around and, in the dark, they were able to locate each other in the dark by waving their arms. Eventually they were able to find the door to the attic and climb up into that. They were dry up there but still not safe. Afraid they might be trapped inside and crushed if the house slammed into a bridge, they fought their way through the roof and climbed out. At some point the house caught in some tree branches long enough for someone to hear Clarence’s whistle and come rescue them. Only later did Clarence discover that their house had never been properly bolted to the foundation.

Meanwhile, Alice’s son Stan, his wife, and their newborn who lived in a neighboring trailer park were also in mortal danger. They somehow escaped their floating trailer and clambered up onto the roof. They made their way to safety by jumping from roof to roof. Other people who remained trapped in their floating trailers ended up being crushed to death by waves of debris piling up against bridges.

By five o’clock the next morning, the water draining from Canyon Lake had passed through, and Rapid Creek was back inside its banks. The Little Red Hen was gone. The Lake Park Motel was gone, taking with it Toots’s and Clarence’s plans for early retirement, but thankfully no one in our family had perished.

Naturally there was no phone service. More than three hundred miles away, Alice and Toots heard about what was going on, but as Mary and Kevin’s wedding day dawned, they had no way of knowing whether or not their loved ones had survived. Together they made the decision not to tell Mary about the situation until after the wedding although I believe my sister, Jane, who had stayed over with Mary the night before actually spilled the beans. Toots is remembered to have said, “Since I can’t do anything about it, I could just as well sing.” And she did.

According to the National Geographic, the Black Hills Flood of 1972 in which 238 people died counts as the worst flooding disaster in the US in the last hundred years. The flood happened on June 9. The wedding happened on June 10. On Wednesday of this week, Mary and Kevin celebrated their 48th wedding anniversary, a happy and sad one both.

But here’s the thing. I believe my Aunt Toots was right. When things are tough and you really can’t do anything about them, you could just as well sing.

27 thoughts on “Tales from the Non-Tour Credible Threat Trail”