Three things combined this week to dictate today’s topic. First was a blog comment from someone who had attended a long ago signing event at the Apache Junction library. She didn’t think I would remember that one, but I did, and in my reply to her I explained why. Next came a text photo from my grandson, Colt, which included a photo of our first long-haired miniature dachshund, Bella. After that came a sad email from my good friend, Bonnie Abney, letting me know of the untimely passing of her beloved Bernese mountain dog, Alexander the Great. She sent along a photo of Alex, and with those two photos in hand, it seemed as though the stars were aligned for me to tell a story, some pieces of which may have appeared before. I have it on good authority that, at my age, I have been granted complete immunity to telling the same stories more than once.

By the way, if Bonnie Abney’s name seems familiar to you, that’s because you most likely met her before while reading Second Watch. If you’ve read that book, you already know that Bonnie is someone who knows all too well that the price of loving is losing. Loving and losing is what happened for us with Bella, too, but I need to start at the beginning.

On a cold and rainy Saturday morning in late October nearly a dozen years ago, Colt, his mom, and I spotted a tiny, terrified dog running for dear life in the middle of a nearby busy street. My daughter let me out of the car, and I chased after the panicked dog. Eventually, with some timely help of two college aged kids who stopped to lend their assistance, I managed to catch her. She was cold, soaking wet, and shaking like a leaf. She had a collar but no tag. We took her to my daughter’s vet where we learned she wasn’t chipped. We then spent several hours in the neighborhood trying to locate her owner—to no avail. Finally, there was nothing for it but to bring her home.

My husband started dating Lynn, his first wife, back in the old days when prospective boyfriends were expected to meet the girl’s parents on the occasion of their first date. When Bill went to Lynn’s home, he was tackled by the family dog, Moxie, a full-sized male dachshund who bit Bill on the ankle hard enough to draw blood and wreck his sock. Although Bill and Lynn eventually married, Moxie continued to regard Bill as evil incarnate for as long as he was on the planet. So let’s just say that Bill didn’t much like dachshunds, and for good reason. That was why I hadn’t been too eager to bring our little stray home. But eventually there was nothing for it but to do it. When we drove up, Bill came out on the porch to see what all the fuss was about, and together he and Colt carried the still shivering little dog into the house.

Colt was in kindergarten at the time. On the way to the kitchen, he was explaining to his grandpa how we had found “this poor little fella” running down the street “Colt,” Bill said, “Fella is a boy’s name. This is a girl dog.” “Okay,” Colt replied, “so we’ll call her Bella.” And we did.

Bella came to us as a complete stranger. She was a starveling, weighing in at seven pounds when she should have been eleven or twelve. We didn’t know her name or what she liked to eat. She didn’t know any of the Academy for Canine Behavior commands that we were accustomed to using with our other dogs, and she had obviously spent her life in an apartment because she had never met a doggy door and had no idea how to use one. She was also terrified of men. We did everything we could to locate her owner, but those efforts came to nothing. Eventually, we took her to the Academy for some training. They let us know that her bad breath was the result of bad teeth. So, after investing $1400 to have fourteen teeth pulled, we decided she was our dog for sure and had her chipped.

That was in October. As I said, she was afraid of men. When we tried leaving her with our male dog-sitter—whom she eventually came to adore—she would hide under the bed and refuse to eat. In December when we had to go to Tucson for an event, there was nothing for it but to take Bella with us. Coming home, in the process of going through airport security, Bella slipped her leash and took off down the concourse. Having not yet cleared security, all I could do was stand there and yell, “Bella, Bella, come back!” She scampered off down the concourse a couple of gates and then turned around and scampered right back. Everyone on that Alaska flight knew her by name, and in that moment we knew she was really ours.

Two months later, when it came time to go on a book tour, she had still not made friends with the dog-sitter, and that’s how she became Bella, the Book Tour Dog. The first day of that tour was in Phoenix. I was a lot younger then than I am now, so the first day was a four-event marathon—Sun City, Peoria, Apache Junction, and Scottsdale. Every event was standing-room only, we arrived at the Apache Junction library in the afternoon. Bella was with me up front during the talk, but during the signing itself, she stayed in the background with Bill although people wanted to pet her and have their pictures taken with her.

During the signing, a woman approached me and asked if I would sign the book for her daughter. While I was doing so, she explained that her daughter had recently succumbed to breast cancer, but she had been a big fan of mine. By the time the book was autographed, both the grieving mother and I were in tears. I passed her along to Bill, and she spent the next half-hour with Bella, being comforted in the steadfast way only a dog can provide.

In the course of that day, Bella interacted with well over a thousand people, and by the end of it, we were all worn to a nub. She went on a few more tours after that, but eventually she realized our dog-sitter was wrapped around her little paw. After that she happily stayed home with him. My novella, A Last Goodbye, available in e-book or audio editions, is a fictionalized version of what may have been Bella’s history before we met her.

The vet who removed her teeth told us Bella was probably eight or nine when we found her. She was with us for seven years, and we lost her on the first day of yet another book tour. We were broken at her passing and miss her still. Seeing her in the photo Colt sent me this week reminded me of what a loving girl she was. We had been big-dog people before we met her—golden retriever people—but Bella taught us to downsize, and she’s the reason we now have not one but two “yappy little dogs,” as some of you may recall I sometimes used to call those noisy little creatures in my books. Yes, you’d better believe that both Jojo and Mary are expert yappers!

So that’s why there are two dogs pictured here today—our Bella and Bonnie’s beautiful Alex. As you can see, Alex was a cheerful, happy dog, who summer or winter, preferred sleeping outdoors to inside. Her house is too empty and unnervingly quiet without him. Eventually the sharp pain she’s feeling right now will become a dull ache, but she’ll still miss his exuberant presence just as we miss Bella’s queenlike dignity.

In the face of the losses so many have suffered during Covid over the last two years, writing about losing beloved pets may seem trivial, but loving and losing still hurts.

Yes, we loved and lost Bella and Alex, but boy were we lucky to have them while they were here. 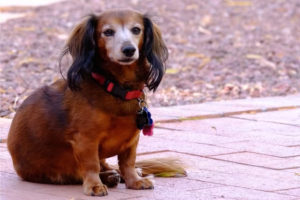 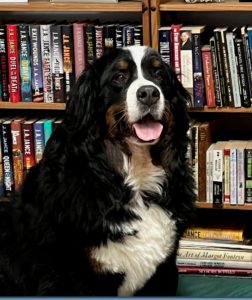