Happy Friday, folks, how about some good news for a change?

While I was out doing my steps this morning, I was thinking about writing the blog and having trouble corralling it into a workable whole, because there are three distinct storylines that all need to come together. I guess I’ll follow directions from that old Sound of Music song and start at the very beginning.

When we bought this house, it was painted–inside and out–in Ralph Lauren BROWN, all brown all the time. The two exceptions were one even browner faux leather wall in the family room and the glossy gold lamé kitchen cabinets. Mary Grandma, my first mother-in-law, would have loved those cabinets. I did not, but I figured I could live with them for the time being. Our interior decorator, Jim Hunt, (Yes he’s Beau’s and Mel’s interior designer, too) replaced some of the brown with brighter colors, but for all too long the faux leather wall and gold cabinets remained. (The leather wall went away when the TV set died, and we discovered it had been built into the studs. The only way to install a new TV was to demolish the wall!)

A couple of years later, when Colt, our grandson, was five, I went shopping with him and his mom on a cold Saturday morning in October. Coming home, we came across a tiny, long haired miniature dachshund who had been abandoned on a nearby street. After an unsuccessful search for her owner, we brought the terrified waif here to the house. As Bill carried her inside, Colt was busy telling his grandpa how we’d ‘found this poor fella on the street.’” “Colt,” Bill said. “Fella is a boy’s name. This is a girl dog.” “Okay,” Colt said at once, “Then we’ll call her Bella.” After all, he had just seen Beauty and the Beast, and the name stuck. Bella soon became our beloved Bella, the Book Tour Dog. (For a Bella-based story, you might want to take a look at my ebook Novella, A Last Goodbye.) 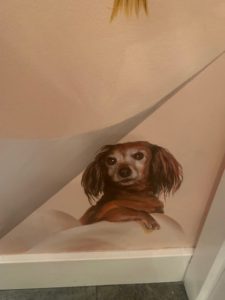 A couple more years passed. While we were in Tucson one winter, a pipe broke in the house up here sending 185,000 gallons of water through the first floor. That necessitated new paint almost everywhere. When I complained to Jim Hunt about the gold lamé cabinets, he asked, “What color do you want them?” I held up my hand, nails polished with Big Apple Red, and said, “Make them match these.” So he did. Jim brought in a muralist who turned that ugly gold lamé into a wonderfully wood-grained red. Jim also set his muralist loose in our downstairs powder room, creating a magical interior that looks like a circus tent. But in one corner, the one behind the door, Jim told me, “I had him put a bit of whimsey.” That’s the photo you see here—an almost life-size portrait of Bella looking as though she’s climbing into the room through a hole in the non-existent wallpaper.

A year or so after that, a new man appeared in our lives, our personal trainer—Dan Kritsonis. He was part of the impetus that got me off my butt and stepping those steps. (17,215,000 as of today!) Through force of circumstance, Dan ended up bringing someone else to our house along with him—his newborn granddaughter, Athena. She had been abandoned at the hospital as a drug-addicted infant. Dan, a divorced single man in his sixties, spent weeks rocking the baby through withdrawal in the hospital nursery. Then he took her home with him and cared for her on his own for the next nine months! At that point, Athena’s auntie, Jessi, Athena’s birth-father’s younger sister, stepped up to the plate and said, “I’ll take her.” Which is how, at age twenty-three, Jessi became a single mom.

If you’re interested in reading this whole story, you can find what I wrote about this the first time by reading The Good Guys Won —posted two years ago this week. After rereading it now, I realize that Jessi was 23 at the time as opposed to 20, but otherwise the story remains correct. At the time I had already used Dan’s story of caring for his Athena as the basis for J.P. Beaumont learning about his Athena, an idea that morphed into the book Sins of the Fathers. The photo on that originally posted blog is of Athena at age three-and-a half holding her autographed copy.

The problem is, at the time I penned that now two-year old cheery note, we all—Dan included—thought everything concerning the adoption was a done deal and things would go smoothly after that. No, that’s not what happened. You may have heard a thing or two about supply chain issues in the world of commerce over the past couple of years. Evidently Washington’s Department of Social and Health Services has suffered from the same kind of thing because it’s taken another whole two years for the adoption to finally go through.

Last summer while visiting with Grandpa Dan on this side of the mountains, Jessi and Athena came by the house to see us, too. Mary and Jojo don’t much care for little ones, but for some strange reason, they both took a shine to Athena. And seeing that portrait of Bella in the corner of the powder room was a real hit. 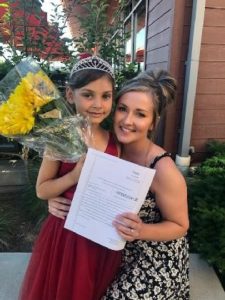 As I said above, this week the adoption finally came through in a hearing held at the courthouse in Spokane. After listening to people talk about Jessi and her fiancé, Tim, saying what they thought about them as people and as parents, the judge asked Athena to stand up and say what she likes about her mom. After that, when it was time to sign the paperwork, the judge—a woman—had Athena come stand beside her. Once she finished signing, she handed the gavel over to Athena and told her to bang it on the desk. Athena did so, and the judge pronounced, “Court’s adjourned.” Now the adoption really is a done deal. That’s Athena and Jessi holding the adoption paper. Incidentally, Athena now has a new middle name—Bella. And that’s entirely appropriate—she’s a beautiful child.

This week at age five-and-a-half, she finally heard the story of how she came into the world. When Jessi finished telling her she said, “Grandpa’s a hero!” Boy did she call that shot!

This weekend Jessi and Tim are getting married. Once that happens Athena will officially have a new stepbrother—Cooper. Athena will be the flower girl. I’m not sure, but I’m guessing Cooper will be the ring bearer. Grandpa Dan will be seated on the bride’s side of the wedding venue along with Athena’s other grandparents—Jessi’s parents who also happen to be the parents of Athena’s biological father.

As for Cooper? Nothing much will change for him. As far as he’s concerned—Grandpa Dan is already his grandpa.

And if that doesn’t qualify as good new, I don’t know what is.

29 thoughts on “Some Good News for a Change”