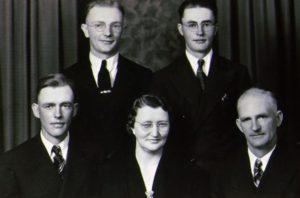 The family portrait featured here is of my father’s family. Norman Busk is on the lefthand side of the photo standing next to his older brother, my Uncle Harold. Their younger brother, Elmer, is seated with their parents Mary and Henry, from Marvin, South Dakota. Bill has always maintained that Busks are like golden retrievers in that they “breed true.” That explains why my grandson, Colt, bears such an uncanny resemblance to my dad.

Norman was born into a totally dysfunctional family. For ten years while my father and his brothers were growing up, their parents didn’t speak to one another. Their sons had to carry messages back and forth between them. My grandfather, Henry Busk, was a never charged and never convicted pedophile. (Don’t ask me how I know!) Grandma Busk was, without a doubt, the meanest woman I ever met. Upon meeting my mother for the first time, she said, “It’s such a shame your ears are so big.” As you can see from the photo, Mary Busk wasn’t exactly what you could call a head-turner. In 1967, while driving from Arizona to Chicago, I stopped by the family farm in the middle of the afternoon to say hello. Grandma Busk came out into the yard and told me how inconvenient it was to have “unexpected company.” I got back into my car and drove away. That’s the last time I ever saw her.

Shortly after Norman turned 18, he went to Summit, South Dakota, ten miles and worlds apart from his previous life in Marvin. That’s where he met Evelyn Anderson who came from an entirely normal family. Fortunately for all of us, even at that tender age, he was smart enough to grab onto normal and to hold onto it for dear life. Evie was slightly more than two years older than he was. When they married two years later, they did so on the twenty-fourth of August—three days after he turned twenty and six days before she turned twenty-two because she didn’t want to be called a “cradle robber.” They were married for 68 years.

One of the reasons my dad gets so little ink in my blog is that he was always out working and bringing home the bacon while our mother kept the home fires burning. At my parents 50th wedding anniversary, my older sister, Janice, said that although our father always worked, he never held the same job for very long. He got a teaching certificate from a normal school but couldn’t earn enough working as a teacher to support his growing family. Ditto for being a county clerk. Over the years and more or less in chronological order, he worked as a farmer, an underground miner, a truck driver, a carpenter, an owner of a construction company, and finally a life insurance salesman. He did that for the next thirty some odd years. In preparation for going into the life insurance business, one of the last jobs he undertook as a building contractor was remodeling the local dentist’s office in exchange for being fitted with a set of false teeth.

My father was a free thinker. Very early on he was drummed out of the local Lutheran church for believing that when Ezekiel saw that wheel “way up in the middle of the air,” he wasn’t making it up. Norman was interested in the Mathematical and Astronomical intricacies behind the construction of things like the Great Pyramids of Giza and Stonehenge and felt as though the builders of same must have had “outside assistance” from somewhere else. Conversations around our evening supper table sometimes featured discussions of books like Worlds in Collision by Immanuel Velikovsky. That’s where I first heard the words “pyroclastic blasts” although I didn’t understand them until decades later when Mt. St. Helens blew up.

In the years before TV came over the Mule Mountains to Bisbee and before my dad went into the insurance business requiring nighttime appointments, long evenings at home were spent listening to our father read poetry to us from his beloved copy of the Treasury of the Familiar, which was gifted to him by his brother-in-law, my Uncle Ernest Johnson, on December 25, 1945. Many of those poems continue to resonate in my heart even today: Laugh and the World Laughs with You; Horatius at the Bridge; It Was Six Men of Indostan; I Had But Fifty Cents; The Wreck of the Hesperus. The youngest kids in our family of seven, the ones who arrived post I Love Lucy, missed those poetry readings, and maybe that’s the reason that tattered volume book was gifted to me upon our father’s death.

Norman Busk was smart. Every morning at 7:45, KSUN Radio aired a five-minute program called WhizQuiz. The host would ask a question, and the first person to call in the correct answer would win two passes to the Fort Apache Drive-In. The station’s phone number was 432-2277. I would sit with all the numbers dialed and waiting to let go of that last seven, which I always did as the question was asked. I could count on our father to have the correct answer on the tip of his tongue. A family was only allowed to win once and month, and we usually did. One question in particular that I’ve never forgotten was this: How do you make eight eights equal a thousand. “That’s easy,” Norman said, ‘eight-hundred eighty-eight, plus eighty-eight, plus eight, plus eight, plus eight.” And viola, we had that month’s pair of passes.

Our father provided our family with everything we needed, but it wasn’t until 1973 that we were able to give him something meaningful back. For Father’s Day that year, we all (Evie included) chipped in five hundred bucks. With that we bought him a round-trip plane ticket to Europe, an Eu-Rail Pass, and a copy of Europe on $5 a Day. We announced the gift to him on Mother’s Day because he needed to be packed up and ready to go by the time Father’s Day rolled around. When we told hm what was up, he said, “You can’t do that. It’s too much.” “Look,” I said, “when you die, I’m not buying you any flowers, and if anyone asks why, I’ll tell them it’s because I spent all my flower money sending him to Europe.” Two hours later, the dining room table at their house in Bisbee Junction was covered with maps collected from years’ worth of National Geographic magazines as he began planning his trip. He was gone for six weeks total that summer, but he still sold the same amount of life insurance that year.

Norman Busk was a good man, a proud man, an honorable man, and an excellent father. Considering the family dynamic he came from, I think that’s pretty damned remarkable.