This past weekend we learned that one of our nearest and dearest is suffering from a hammer toe. I fully understand that dealing with that condition is no laughing matter but hearing about it reminded me of my worst ever case of giggles, one directly attributable to my mother’s hammer toe. But first a bit of background.

My father, Norman Busk, came from a totally dysfunctional home. There was no laughter in the household where he grew up on a farm outside Marvin, South Dakota. Then a miracle happened. Ten miles away, in Summit, he met the Anderson family, A.G. and Celia. Their house was full of laughter and singing. In other words, it was normal. At 18 years of age, he was totally gob smacked by normal. In fact, he was so all in that he married the third eldest Anderson girl, Evelyn, and their 68 year-long marriage was full of light-hearted humor, laughter, and practical jokes.

In the early nineties my mother was diagnosed with a hammer toe and went to see Doc Dregseth in Sierra Vista. Evie had a sense of humor, yes, but she didn’t take any nonsense, either. Dr. Dregseth took a look at her toe and estimated it would cost something between two to three-thousand dollars to fix it. “How much to take it off?” she asked. “$250.” “Okay then,” she said. “Take it off. I don’t need that toe anyway, but when you’re done with it, I want it.”

Did I mention that no one ever argued with Evie? That went for Dr. Dregseth along with everyone else. The hammer toe came off, and Evie took it home. My folks were living in Southern Arizona. She put the amputated toe out in the hot desert sun until it was good and properly jerked. Then she put it on a bed of cotton in an Altoids box and carried it in her purse. (Have I mentioned that my mother’s purse was a wonder and a marvel?} 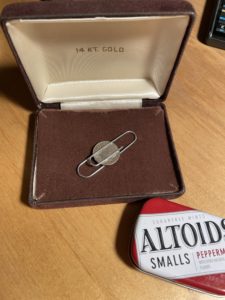 Time passed. When our son married, the folks showed up. The wedding was held in our home, and the bride’s family came from eastern Washington fort the event. My father, a handsome silver-haired guy, was retired from the insurance business then, but he remained a practical joker. During the reception, he mingled with the guests, asking if they would like to see his “diamond clip.” Thinking it to be a retirement gift of some kind, they all said, “Yes.” At that point, he open a small box, to reveal a dime with a paper clip attached. The guests all laughed. It was a fun joke, but as soon as he moved on to his next set of victims, my mother would show up. “Would you like to see my hammer toe?”

So here was a sweet little old lady holding an Altoids box. This had to be a joke, too, right? Wrong! Some of the wedding guests left shortly thereafter and never darkened our doorstep again.

The next family wedding came along, this time at the Treasure Island Casino in Las Vegas. Most of the guests at that wedding had been to the previous one. The reception was scheduled for four PM. As the waitstaff began serving champagne, someone piped up with the hammer toe story. Within minutes, the whole room was alive an assortment of toe jokes. Some of them were totally appalling and hilarious, as everyone tried to make their toe joke top the previous one. By the time it was over, I was laughing as hard as I’ve ever laughed in my life. My parents weren’t at that Las Vegas wedding in person, but they were certainly there in spirit.

These days Norm and Evie’s enduring love and laughter continue to brighten my life and often my readers’ Friday mornings as well. So, let’s hear it for “diamond clips” and hammer toes, because laughter really is the best medicine.