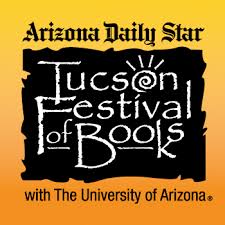 Next weekend is the tenth annual Tucson Festival of Books, and Thomas Perry, Luis Urrea, and I have been there every single year. And because the festival is held on the campus of the University of Arizona, my alma mater, I’m always especially glad to participate. In years past, when the festival came around, we were usually at our home in Tucson. All I had to do was hop in the car and head down the street a mile or so, and voila! There I was. This year Bill’s health situation has kept us snowbound in Seattle. So this time, instead of hopping in the car, I’ll be hopping on a plane to fly down for the weekend.

My Festival Schedule is up on the website. Copies of my new Ali book, The A List, will be available at the festival. And people who can’t stand to wait until the official April 2 pub date, can contact Mostly Books in Tucson for autographed copies. The April book tour schedule for The A List is not yet finalized. Once it is, it will be posted.

The festival is free, but it runs on an army of volunteers and members, and members are able to order advance tickets for the various venues rather than having to stand in endless lines. So if you want guaranteed seating, now’s the time to get involved.

So the festival is coming, but it also marks a serious deadline. The next Beaumont book, Sins of the Fathers, must be done before I set foot on that plane. Being stuck at home in the snow has made for a lot of forward progress. I count the words every day, and a day that I make two or three percentage points forward counts as a good day. But I haven’t been on the banana peel—until today. The banana peel is the part of the book where it all comes into focus. It means I’m on the downhill slope and racing toward the finish line.

When I do appearances or interviews, my least favorite question is this: Where do you get your ideas? It’s such a vague question because books are constructed of multiple ideas that have to be herded into a wad and woven into a book. So today I’m going to tell you the tangled tale of one such “idea.”

I started wearing nail polish in the early eighties. I was in Phoenix and getting a divorce. My house had a yard filled with lush St. Augustine grass that was suddenly being invaded by clumps of crab grass. I took a trowel and out I went to do battle with the crab grass, attacking it as an alternative to physically assaulting my soon-to-be ex. I won the battle that day, but my fingernails were a mess. It happened that I had an insurance event that evening at Pinnacle Peak, so late in the afternoon, I had a quickie professional manicure. It was done quickly and it was gone the same way because it turns out my nails to not react well to regular nail polish.

Fast forward a decade or so. We were going to Ashland with a group of folks, and we declared one day as a spa day. And that’s where I met gel nail polish, the kind you have to soak off. My favorite color is red, so Big Apple Red was my shade of choice. And miracle of miracles, it stayed on. My nails didn’t collapse and peel underneath. And all these years later, Big Apple Red is still “it” as far as I’m concerned.

For years now, my manicures have been done by Andy’s Nails here in Bellevue. A couple of years ago, Andy introduced me to a dipping style of acrylic. SNS maybe? The thing I like best about the combo acrylic/gel manicures is that the nails don’t chip. Occasionally after a week or two one will come off, but if you’re lucky enough to be married to a retired engineer armed with super glue, they can often be reattached. (By the way, did you know that super glue was invented for use in surgical situations?)

So yesterday and the day before I had nail events. I lost one one afternoon and another yesterday afternoon. They were on the kitchen table, awaiting reattachment, when I started dinner. At the end of dinner, I discovered that instead of two missing polish on two fingers, I was missing three.

Instantly I was transported back to 1971. My first husband and I were working on the reservation. Christmas was coming up, and for Lil Jul Aften I planned to give each family a loaf of home made whole wheat bread. That seemed like a good idea to Cheryl Carrell, one of my teacher friends, so on a Saturday just before Christmas we teamed up to bake 32 loaves of bread. At the end of the day after all that rolling, kneading, and cleaning, I noticed that one of my nails (unpolished back then) had broken and disappeared.

What to do? We sure as hell weren’t going to throw away 32 loaves of bread. So Cheryl and I wrapped and froze the loves we planned to give away, and held back two loaves for our own families. The next night at dinner, my husband’s face suddenly filled with alarm. He lurched away from the table and headed for the nearest sink. “I guess you found my fingernail,” I said when he returned. And he had.

Unable to find last night’s missing nail, I scanned through the leftovers, wondering if it had fallen into one of those. Nope, it wasn’t anywhere to be found. When I went to bed last night, I was still worrying about it. And that’s when I remembered Edmond Locard’s Exchange Principle that says every human interaction leaves behind some trace—a revolutionary idea from a 19th century French detective that forms the basis of all modern forensic science. And that’s also when I figured out how Beau will solve his current case.

Spoiler alert? Maybe. But if you happen to remember this blog when you’re reading Sins of the Fathers, you’ll know the exact moment when Beau and I stepped on the banana peel together.

PS This morning my husband spotted the missing nail on the floor in the bathroom. All three are now properly glued in place, and they need to stay that way because my next appointment with Andy is the day before I leave for Tucson. After I finish writing the book.

When you see me at TFOB, I’ll be sporting brand new Big Apple Red nails—a manicure which, at that point, will be totally devoid of superglue.

PPS Any further questions about where do I get my ideas?