I graduated from the University of Arizona in May of 1966.  By the fall of 1966 I was a beginning teacher at Pueblo High School in Tucson.  I had managed to grab what was then considered a plum job with Tucson District Number One.  In those years, due to overcrowding, Pueblo was on double sessions, so in September of 1966 when I was 22, I was thrown into a 6 AM class full of seniors who were all only a few years younger than I.

Let’s just say it was a challenge.  It was the old days.  I wore heels and hose and dresses to school every day.  I wore size eleven shoes at the time.  There was only one store in town that carried size elevens, and those was all narrow width.  My feet have always been medium.  So I ended up with a gorgeous pair of black and white spectators, but by the end of school each day, I was in agony.  That’s my biggest memory of that first year—that my feet hurt every day.

It seemed to me that I never managed those senior kids all that well, and so, for my second year, I asked to be moved to the afternoon session where I ended up teaching sophomores.  I was more experienced by then and felt that I had better control of the classroom.  We did a recreational reading program that was a huge success.  Years later, one of those sophomore kids—the one who had given me the most grief—told my husband that I was the best teacher he ever had.  But all these years, I’ve considered what I offered those older kids in my first year of teaching was less than stellar.

So this week, I received an e-mail from a woman named Cindy whose late mother, Roberta, had been one of my students. Cindy said, in part, that her mother had come to one of my signings years ago and had a book signed.  Cindy added, “She loved your stories and she was also very proud to let people know that she had you as a teacher at Pueblo.”  Cindy finished by saying that when she’s reading my books, she feels as though her mother is looking down on her and smiling.

That comment was enough to make me go all warm and fuzzy.  Knowing that reading my stories can elicit that kind of connection to a missing loved one is a comment to cherish, and I do. 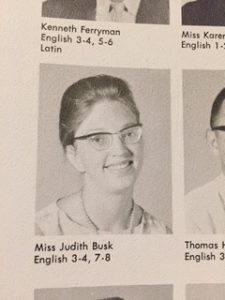 When the e-mail came in, it was too precious not to share, so I read it aloud to my husband. The thing is, I taught at Pueblo for two years, and I didn’t know which of those years Roberta had been one of my students. A few minutes later, however, Cindy sent a followup e-mail.  It contained a photo taken from her mother’s high school year book of a faculty member, “Miss Judy Ann Busk.”  My goodness!  Looking at that photo I was struck by how very, very young I was back then.  Since I married during that first year of teaching, I was Mrs. Judy Janc when I taught in the afternoon session.  Roberta had been one of those hard-to-crack seniors.  And she remembered me.  Despite my misgivings, I had been a teacher she looked up to and valued.  What a gift that was, coming at me out of the blue, all these years later.

Then something else struck me.  In that yearbook photo, I noticed that way back then, I wore my hair the same way I wear it now—pulled back on my head and fastened into a French twist with combs.  Some things never change.

So I’m sitting here humming a few bars from the theme song of that BBC series, New Tricks.

It really doesn’t matter if you’re old and gray

Getting to the end of the day.

But today, I’m taking Cindy’s gift with me.