My mother, Evie, used to call herself an SOG with PIP—Silly Old Grandma with Pictures in Purse. First a word about that purse—or rather a whole series of nearly identical purses. They were never very large but their densely packed contents were wonder to behold. There was always a wallet of course, one that came with a little plastic coin holder inside it. In addition to her regular driver’s license, it was also equipped with my mother’s always valid BACKSEAT driver’s license! In addition there would be a long handled comb, a scissors, a container of Band-Aids, and a sewing kit—not to mention a paring knife. After all, you never could tell when you might encounter a day old sweet roll in need of being cut in half. And, in case you’re wondering my mother didn’t do any airplane flights in the aftermath of 9-11. Her purse alone probably would have landed her on the terrorist watch list. In addition to all the above, there was always a tiny pocket sized photo album containing her kids’ and grandkids’ latest school photos. That was the origin of the term SOG with PIP.

Now it’s a brand new era. Although I am glad to be an SOG, all my photos are on my computer as opposed to in my purse, making me an SOG with POC. As far grandkids are concerned I have ten. The three older girls, the “tall ones,” are actually my stepson’s daughters. All of them are WSU graduates. One is married with four kids of her own. The other two are working in their fields. If you were to stand the four of us in a row, you’d be hard pressed to say they aren’t my blood relations because we’re all over six feet tall. The next batch of four grandkids is also the most recent. They’re all boys and definitely on the lanky side. They came as a package deal when our stepson married their mother, Kathleen. When Bill and I married, we ended up with a blended family of five. Bill J. and Kathleen outdid us with a blended family of seven!

Next up are the “short” granddaughters. Audrey and Celeste came to us from separate orphanages in China. They are tiny. The other day Audrey was showing us some of her new clothes, and I realized that I haven’t worn clothing that size since I was in third grade. They may be tiny, but oh my are they smart. Audrey just finished her first year at WSU with a 3.9 GPA, and Celeste will be going there in the fall as an honors student. 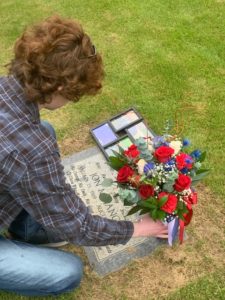 Which brings us to the “baby” of the family, my daughter’s son Colt. He’s sixteen, six-four, and yes, he has a whole mop of dark red hair. I don’t think any of us realized how curly it was until he decided to let it grow out. The accompanying photo was taken on Memorial Day this year when he and his mom visited his father’s grave at the Douglas Munro Memorial Cemetery in Cle Elum. Jon was an active duty Coastie when he lost his nine-year battle with malignant melanoma. Colt was only nine months old at the time and a babe in arms when his father passed away, but every single year when Colt and his mom make their annual Memorial Day pilgrimage to Cle Elum, the guys who did Jon’s 21-gun funeral salute are always on hand to greet them and to marvel at how much Colt has grown.

He’s a great kid—a sophomore at Lake Washington High School and a good student. He came equipped with a tech brain. He designed and ran for the lights for his school’s production of Chicago this spring. He does tech support—lighting and camera work–for church services and events. He’s also a serious bowler. Last week when the Professional Bowler Association Tournament came to Angel of the Winds Casino in Arlington, Colt participated in a Pro-Am event where kids got to bowl five frames against various pro-bowlers. One of those sets Colt bowled was against an Australian bowler named Jason Belmonte, and Colt beat him all five frames! When Sunday came around, Belmo as he’s called, walked away with the tournament victory. So saying that Colt is a serious bowler is no exaggeration.

Last night, Colt asked if he could interview me for one of his final assignments for this year’s Language Arts class. He asked a lot of interesting questions about where my family came from and the origins of our names. I told how my forebears immigrated to this country from Sweden and Denmark respectively. Our great uncle, Snip Fransen, always claimed that made all of us kids Norwegian. I explained how my first husband’s family name was shortened from something much longer to Janc when they immigrated to the US, and I also told the story of how I paid $400 in 1983 to add and E to my name so people would pronounce it correctly—Jance like Dance instead of Janc like Tank. But this morning while I was out doing my steps, I realized I forgot to tell Colt the most important name story of all—how he came by his. 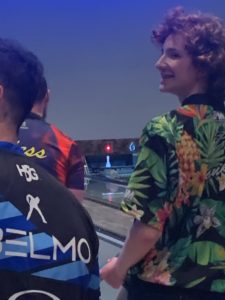 When my daughter met Jon, he was known as Jon Barbero—a name that had come to him via a short-term stepfather. Jon and Jeanne T. first met while going to school in Tucson where they both volunteered with Special Olympics. By the time they became romantically involved, Jon had served two tours of duty with the US Marine Corps in the Middle East and was then Active Duty with the Coast Guard.

Their wedding was picture perfect, but when it came time for the minister to introduce the newly married couple, he did so as Mr. and Mrs. Jon Jance. That was the first I had any inkling that Jon was officially changing his name to our daughter’s instead of the other way around. And that’s why Colt is Colt Jance—something I consider to be a personal gift from Jon to me.

Jon Jance was one terrific guy, and by the looks of things, I’d say Colt is going to be a chip off that fine old block.

And that’s all today’s news that’s fit to print. Over and out from SOG with POC.