Usually my dreams from over night vanish the moment I open my eyes. (To all the people who have asked me if I dream up my stories, now you have a definitive answer—N-O!) But now one of those dreams has stayed on and has been knocking around inside my head like one of those old-song ear worms. This morning I decided that if I finally broke down and wrote about it, maybe it would go away, so here goes:

In the summer of 1968, my first husband, Jerry Janc, was offered a teaching contract at Sells on what was then the Papago Reservation. At the time I still had a position teaching English at Pueblo High School in Tucson, but I had started working toward a degree in library science. At the last minute, the librarian at Sells quit and I was offered the job on a provisional basis. Since there was school housing on offer, we drove out to have a look at what turned out to be a cluster of small bungalows just west of the school campus. We would later learn people often referred to it as “the Fishbowl” for obvious reasons—primarily zero privacy. One look was enough for me, and I told my husband there was no way in hell I was going to live there.

Faced with a sixty-mile commute, my husband went looking for an alternative, and he found one—a one-bedroom brick house in the middle of nowhere on the far side of Three Points. It was located on King’s Anvil Ranch two miles off Highway 86 at the end of two miles of a rugged dirt track. Although the house had sat empty for a long time, it had once been used as living quarters for ranch hands, and John King, the owner, was willing to rent it to us for forty dollars a month. It was off in the hinterlands all right, but in my opinion, it beat the Fishbowl all hollow. We took the deal, moved in, and stayed for the next five years. While we were on the reservation, people used to call our place Janc Hill. For all I know, they still do.

First, an aside about the name. My married name was spelled Janc. It was supposed to be pronounced Janc like Dance but it was mostly mispronounced Janc like Tank. After my first husband died, I had to go to court to be named legal guardian of my children in order for them to receive his pension funds. While there I took the extra step of changing the spelling of our last name from Janc to Jance so people would say it correctly. In 1983, I paid four hundred bucks for that vowel. In 1985, when Bill asked me to marry him, I said, “Fine, but I just paid $400 for this name, and I’m not changing it.”

The house was located at the top of a rocky volcanic outcropping that rose up out of an otherwise flat valley. A well to the south of the hill provided water that was sent by means of a rope-pull pump either to a stock tank nearby or else to a water behind the house at the top of the hill. This wasn’t what you could call high class living. The small house consisted of a single bedroom, a kitchen, laundry room, and combination living room/dining room, and a half-assed screened porch. The brick exterior had zero insulation and there was no air-conditioning. The flooring was somewhat polished concrete. The kitchen stove was so tiny that, in order to roast a Thanksgiving turkey for company, we had to bury the bird in a Magnalite roaster and cook it in a fire pit outside.

The hill was a wild place. Rattlesnakes? Yes, we killed one or two a year right in our yard. The first one showed up the first night we lived there. The dogs were going nuts outside. They had the snake cornered in the middle of the carport, and my husband shot the snake through the kitchen window. Bullet holes through the window and screen most likely remain to this day. A few years later we found another one camped out on our back porch when we came home from school one afternoon. He was resting on the river rock wall, just inside the screen to the left of the open doorway. I was pregnant with our daughter at the time, and that made a huge impression on me. There were coyotes everywhere and a herd of javelina that hung around. One morning, while putting on my makeup in the bathroom, I looked out the window to find a coatimundi hanging on an ocotillo branch just outside and not more than four feet away from where I was standing. 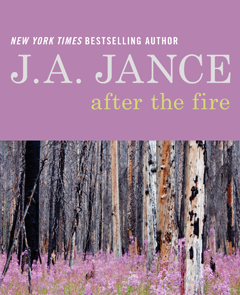 Life on the hill was lonely at times. The nearest neighbor or telephone was seven miles away. We were two miles off Highway 86, and thirty miles from town in either direction. My husband was a drinker from the time I first knew him, but he always promised that once we had kids, he’d quit—a promise he didn’t keep, by the way. During our years on the hill, he was usually passed out in his recliner early in the evenings. By then I was beginning to see that there might be dark clouds on the horizon of our marriage, and during my long solitary evenings there I began writing poetry, some of which forms the basis for my book of poetry, After the Fire.

We left the hill and moved to Washington state in 1983 when our daughter was seven months old, primarily because of the snakes. I had been willing to run the risk of encountering a rattlesnake bite for myself but not for a toddler.

Over the next few years as the marriage continued to deteriorate there were several more moves—from Washington back to Arizona, and then from Bisbee to Tucson, and finally to Phoenix. Shortly after my divorce and before the kids and I moved from Phoenix to Seattle, I took a solo driving trip out to the hill just to look at it one more time. That night, I wrote this:

A windswept house on barren lava flow
Surveys the desert floor for miles around.
To this unlikely spot whose beauty none but we could well discern
We brought our new-made vows
And love.

We were each other’s all in all.
It was enough, at least at first.
Then small erosions came to sweep us from our perch.
The house still stands. Only we
Are gone.

By now you’re probably wondering about that dream. In it, a fellow teacher and I were walking home to the hill from Sells. (Since it’s 30 miles one way, even with my current step tally, that would be no mean feat.) In the dream, however, I was nagging away at my companion, telling her to walk faster or we wouldn’t get to the house before dark.

Traveling Highway 86, east from Sells, you drive along the base of Kitt Peak, Ioligam as the Tohono Oodham call it. Then, after a long left-hand curve you come out on an high point overlooking a long flat valley. If the afternoon sun is just right, you can see the white brick of the house glowing in the distance some ten miles away. That was the point in the trip when I was urging my fellow walker to get a move on.

Then the dream went dark for a moment. When it resumed, we were walking through the carport into the back yard to the back door that actually functioned as house’s the main entrance. The first thing I noticed was that the struts holding up the water tank had broken and the tank itself lay wrecked on the ground. Then we stepped inside the house into the dining room area. The table where I once sat to write the secret poetry my husband never saw was gone. In its place was a chasm where someone had used dynamite to blast a glory hole through the concrete floor to the rocky ground below.

That’s when I woke up—not only with that vision of the gigantic hole in the floor swimming in my memory but also with a very real sense of loss. Yes, the hill was a wild, barren, and lonely place, but once upon a time it was “our” place, and now, in that haunting dream, it no longer existed.

It’s taken me weeks to figure out why that dream has stayed with me, and now I think I understand. I had to leave one less-traveled road—the one that led to the hill—to step onto another—the one that led to the life I lead now. Yes, my first dream—the one of living happily ever after with my first husband—had to be shattered in order to make way for another—the dream of becoming a writer. In the first dream, I would have had two children and one grandchild. In the second I have five children, ten grandchildren, and three great grandsons. But the point is, traveling that first road inevitably led to the second.

And isn’t that the way life works? All steps are necessary. No steps may be skipped.

Speaking of which, the sun is out right now, so I’d better get walking—I have at least five miles to go before I sleep. That’s at least 11,000 steps, but who’s counting?

17 thoughts on “The Road Not Taken”