When I started attending Bisbee High School in 1958, it was at the “old high school” up in Old Bisbee.  That entailed a bus ride on city buses, (seven cents on and seven cents off) from Warren up to the old part of Bisbee.  The bus put kids out at the bottom of Main Street.  From there it was a hike up School Hill to get to the school itself.  At the time, Bisbee High’s four-story building was listed in the Guinness Book of World Records due to the fact that all four floors were “ground” floors.  That’s what happens when you perch a building on the side of a hill.

By the time Christmas break ended that year, construction on the new edition of Bisbee High on School Terrace Road down in Warren was complete and that’s where we went from then on—the new school.  By the way, it’s currently coming up on the 60th anniversary of that move from the old school to the new one, and that’s how people in Bisbee still refer to those two separate buildings—the “old” school and the “new” school.

Once BHS moved to Warren, using city buses no longer worked for the kids who lived in that part of town.  So how did we get there?  Underclassmen, the freshman and sophomore boys who didn’t have driver’s licenses and freshman and sophomore girls who didn’t have upperclassmen as boyfriends, were reduced to using what my mother liked to call “shank’s mare” or, in other words, “get off your duff and walk.”  (I started to say get off your “butt” and walk, but trust me, Evie Busk would never have used the word butt, at least not in public.)  Come to think of it, I have no idea how my mother, a woman of Swedish origin who was born in South Dakota became acquainted with the term “shank’s mare,” which, according to Siri, hails from somewhere in Scotland, but learn it she did, and she liked using it, too.

I was six feet tall in seventh grade.  You can bet your bippy that I wasn’t one of the girls with a boyfriend in the junior or senior class who would drive me back and forth to school, so I walked.

An Internet search tells me that the distance between the house on Yuma Trail and 325 School Terrace Road is 1.3 miles. Funny, I always thought it was a lot farther than that, mostly up hill, and mostly in the snow, right?  According to Siri’s walking notes, it’s mostly flat and should take approximately 27 minutes, give or take.

I would walk down Yuma Trail, turn left on Arizona Street, right on Congdon, and eventually I’d end up on School Terrace Road. The Congdon part of the journey crossed the Vista, which consists of two streets, East Vista and West Vista, on either side and facing  a long, narrow park.  In the old days that was the part of town where the local gentry lived—the copper company bosses, the doctors, attorneys, and judges.

Two of the attorneys who lived on the Vista were a father and son duo named Moore.  The house belonging to Mr. Moore, the elder, was on the corner of West Vista and Congdon.  The house was constructed of brick that had been painted white.  The exterior sported bright green trim and a deeply shaded front porch.  Part of what shaded the porch was the simple fact that the house faced east rather than west.  Nonetheless, a good part of the shade came from a gnarled old wisteria plant that had grown up next to the porch’s outside corner.

Through the winter, as I walked back and forth to school, the gray bark on the wisteria made it look as though it was dead as can be.  Then spring would come and the gray branches would be transformed into a thing of beauty, with lush lavender flowers drooping down like immense bunches of grapes.  I was enchanted.  I loved those flowers then and always wanted to have some of my own.  Now I do.

That took time—decades even.  The arbor at the bottom of the steps leading into the back garden is covered with two separate wisteria plants—not as old and gnarled as the one at the Moore’s house on the Vista, but lush and beautiful all the same.

A couple of times over the years we returned from wintering in Tucson too late and came home to find that the wisteria had already bloomed.  This year it was so cold for so long, that it has yet to bloom.  It’s starting to show hints of lavender, but no real color yet.

Since we’re leaving on a cruise in a little under two weeks, I’m worried.  I don’t want it to bloom while we’re gone.  So I’m not waiting for Godot right now; I’m waiting for the wisteria.

I’ve loved wisteria for sixty some years now, and I don’t want to miss it. 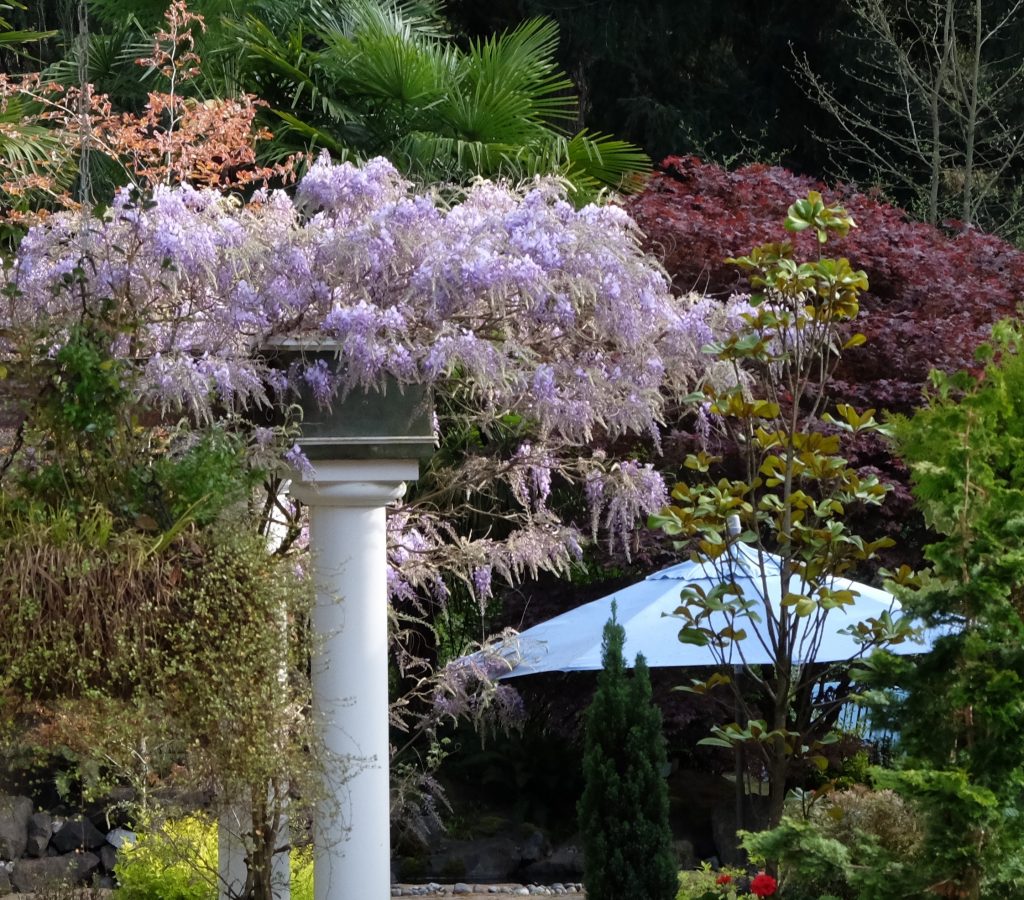 10 thoughts on “Waiting for the Wisteria”