Whew!  Thirty-five hundred miles in a little over three weeks.  That many miles combined with countless events means that Bill and I have covered a lot of ground.  He’s been doing the driving; I’ve been doing the talking and signing.  Most nights we were ready to hit the hay by nine o’clock or so.  If anyone is under the misguided impression that being on a book tour is like being on vacation, please disabuse yourself of that notion.

The dogs took a more direct trip home, so Jojo and Mary were already at home in Bellevue, Washington, by the time we got here.  What we wanted more than anything was to spend some quality time with our puppies and our own television set and clicker.  We also wanted to take a long hot showers.  The dogs and the TV parts worked just fine.  The shower?  Not so much.

One of the hazards of having two houses is that something goes wrong with one when you’re visiting the other.  In this case, it was the thermostats on the hot-water heaters.  Why both decided to fail at once is one of the mysteries of the universe, but fail they did, and COLD showers are definitely not my thing!  The kitchen garbage disposal had given up the ghost as well, so we spent two days with a plumber putting those issues to rights while our yappy dogs did what they do best—they yapped.

In addition, the trickle charger on the car in the garage had somehow come loose which meant that the car was dead as a doornail.  It no longer recognizes either of our key fobs, and the only way to open the trunk is to have the ignition on and one foot on the brake.  (Not exactly convenient for loading the trunk.)  With the application of Bill’s Amex, that problem is now resolved as well.

But still, despite those little bumps, we’re home and happy to be so. 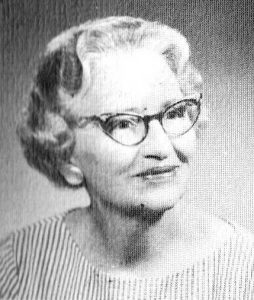 This week, as we traveled, there was another blast from the past.  I heard from a complete stranger, Cindy Pearson Cole, who turns out to be the granddaughter of one of my favorite teachers from Bisbee High School.  Cindy’s mother, Rachel Eleanor Riggins was the daughter and namesake of her mother and my beloved teacher, Rachel T. Riggins.

Mrs. Riggins was my home room teacher through all four of my years at Bisbee High.  My junior year she was my Journalism teacher, and during my senior year when my best friend, Pat McAdams Hall, and I were co-editors of our student newspaper, the Copper Chronicle, she was our newspaper advisor.  She was a kind, soft-spoken woman with a hairdo that came straight out of the forties.  She was also the teacher who recommended me for Pima Hall, the co-op dorm at the University of Arizona that, in large measure, made it possible for me to attend four years of college.

Cindy Cole was only eleven when her mother died of a heart ailment at age 35.  One morning while making the bed in preparation for going off on vacation, she dropped dead, and Cindy was the one who found her.  Cindy had previously received some CPR training at school.  After summoning help and while awaiting the arrival of the medics, she tried administering CPR to no avail.  It was too late.  Her mother was gone.

Mrs. Riggins’s daughter’s death occurred years after I graduated from high school, but she was one of few teachers with whom I stayed in touch even after I left town, and I knew she was devastated at the loss of her only child.

So why did Mrs. Riggins’s granddaughter contact me? Cindy’s two children— her daughter, Margeaux Adams Spain and her son, Henry Adams, were about to visit southern Arizona, and their mother was hoping to locate the house in Bisbee where their grandmother had once lived.  While searching for information on the Web, she had Googled her grandmother’s name and Bisbee, Arizona.  What should show up in that search result was my Going Back To Bisbee blog entry from September of 2015.  In it I had discussed how some of Rachel Riggins’s timely advice, given to me long after high school, had favorably impacted the life of one of my own students when I was a teacher at Pueblo High in Tucson.

Thus began Cindy’s and my e-mailed conversation.  Because Pat and I had worked closely with Mrs. Riggins on newspaper production, we had visited her home often. I was able to let Cindy know exactly where the house was located. Mrs. Riggins was a big believer in manicures, something Pat and I regarded with endless fascination since neither or our mothers ever indulged in manicures.  When I mentioned that fact to Cindy, she wrote back telling me that on long family road trips, she and the woman she calls Grammie would sit in the back seat of the car and have pretend manicure sessions.  It’s interesting that that single telling detail—Mrs. Riggins’s love of manicures from back could still have so much impact on both Cindy and me all these years later.

Cindy asked me what if anything I knew about Mrs. Riggins’s second husband in what she referred to as a brief but disastrous second marriage.  A second marriage.  That was news to me.  I knew nothing of the existence of a second husband.  Mrs. Riggins was actually Julia Rachel Thompson Riggins, which by the time I knew her, she had shortened to Rachel T. Riggins.  Her daughter was  Rachel Eleanor Riggins.  In an era when wives generally took their husband’s last names, how would a second husband fit into that picture?

Pat and I thought Mrs. Riggins came from somewhere back East and that she had graduated from Mt. Holyoke. It turns out she was a Bisbee native although she wasn’t actually born there.  Her mother trekked over to El Paso and gave birth in the Hotel Dieu Hospital there. The Mt. Holyoke part of her story was correct, but that raised more questions.  How did a girl from Bisbee, Arizona, born in 1908, end up in an elite East Coast college?  And, much to my surprise, I learned that she had two younger brothers, Bob and Sumner.

Pat and I were under the impression that the woman we knew as Rachel T. Riggins had been widowed at a very early age.  We knew that her husband, a physician in Bisbee, had died at some point.  I’ve now learned from Cindy that Dr. John Carton Riggins originally hailed rom North Carolina, and that the couple met while attending school in Tucson.  But back in 1962 all or this information was shrouded in mystery.  Inquiries into the private lives of teachers were strictly off limits.  Together Pat and I theorized that Dr. Riggins must have gone away during World War II and not returned.  Beyond that, Mrs. Riggins’s personal life remained shrouded in mystery.

I believe Pat and I were a bit of a trial for her.  I remember her admonishing us on occasion that we shouldn’t get pleasure from our evil thoughts.  I can tell you that whenever she told us that, we dissolved into fits of giggles.

In the course of our correspondence, Cindy told me that Dr. Riggins died of pneumonia in 1937, so our assumption of his perishing in World War II was way off base.  She also mentioned that Mrs. Riggins discovered that she was pregnant with her daughter shortly after her husband’s death.  Was she already a teacher at that point?  I have no way of knowing, but I doubt it.  She evidently submitted a thesis for a Masters Degree in Social Work in 1946. I have a feeling teaching came later as she struggled to support her daughter.  Being a single mother is always difficult, maybe even more so then than now.

I asked Snoody Holland Boroweic, a longtime acquaintance and a Bisbee native, to do some research for on the matter.  She came up with a marriage certificate dated March 9, 1946 between between one Keith Forrest Collins and Rachel Thompson Riggins.  That was the same year the thesis was submitted.  I have no idea how or why that marriage ended.  Perhaps there was an annulment.  Considering the times, she may have been forced to spend six weeks in Nevada in order to obtain a quickie divorce. According to Cindy, she refused to discuss that part of her life with anyone, so perhaps she never did get around around to obtaining a divorce.  In any event, I suspect that finding a teaching job back in those days would have been problematic for a divorced woman.

Sometime in the seventies, Mrs. Riggins left Bisbee and moved to Tucson, Arizona, where she was hired by the University of Arizona to supervise student teachers.  She was probably the very best candidate they could have found to do that challenging job. I visited her only once at her second address in Tucson which, as it turns out, is less than a mile from our place in El Encanto.  By then, though, I was going down the rabbit hole of my own difficult first marriage, and after that I simply lost track of her.  Official records list her death as having occurred in Prescott.  That was evidently in error.  Cindy tells me she died at a nursing home in Tucson.  She was cremated.  I can only hope that her ashes were scattered in Bisbee.  I like to think that she was finally able to go back home.

Now, through the magic of the Internet, Cindy Pearson Cole knows more about her beloved Grammie than she knew before, and I know a few more bits and pieces about Mrs. Riggins, my much loved teacher from Bisbee High.  More than five and a half decades later, she remains as much of a mystery to me as she ever was—a much loved mystery and one well worth revisiting.

Rest in peace, Rachel T. Riggins.  And just in case you’re interested, Pat McAdams and Judy Busk are still getting pleasure from their evil thoughts.

3 thoughts on “Tales From the Trail, Take Three”