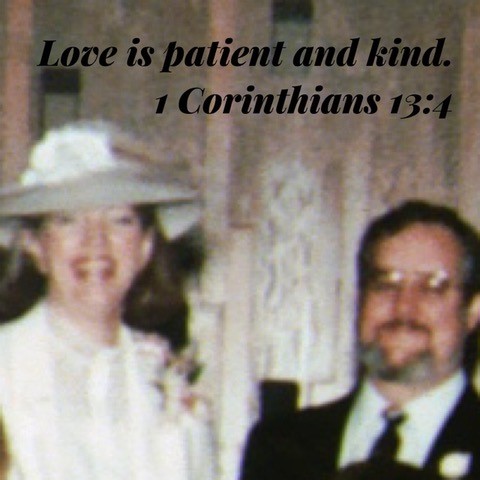 Before we go any further, do not adjust your set and don’t go in search of your reading glasses. The photo you’re seeing doesn’t just look fuzzy—it is fuzzy. Every morning my daughter sends me a verse from her Bible App super-imposed over a photo. Yesterday, this is the one she sent. It’s a snapshot taken on December 21, 1985, the day Bill and I married. It was a second marriage for both of us, and together we had five kids. Hiring a professional photographer wasn’t in the cards and … well … you get what you pay for. The thing that shines through that fuzzy photo, however, is the joy on both our faces, because we were elated.

As far as many of our friends and relations were concerned our trip to the altar was shockingly short. I wouldn’t be surprised to learn that there was some speculation here and there about our possibly being in a family way. We weren’t; we were just in a hurry.

After the Fire, my book of poetry, was first published in 1984. In 1985, Diane Bingham, the Vietnam War widow who helped found Widowed Information Consultation Services of King County—WICS—asked me to do a poetry reading at their upcoming widowed retreat in June. She had encountered the book through a friend of mine and had taken it to one of her grief support groups as an example of “creative grieving.”

The book may have been published in 1984, but it had been written over the course of the previous fifteen years. It’s a record of the challenging journey that took me from being a glowing newlywed in the late sixties to a grieving widow in the early eighties as my first husband gradually succumbed to the ravages of alcoholism. I didn’t give up without a fight. Between 1972 and 1980, in futile efforts to somehow fix him, I saw to it that my husband was hospitalized for booze nine different times. None of those efforts at sobriety worked for longer than a few weeks at most, and finally I was forced to give up. I got a divorce, but fearing he’d be able to talk me into taking him back, I loaded my kids into my 1978 Cutlass, hooked on a U-Haul trailer loaded with all our worldly goods, and moved to Seattle in June of 1981. A year and a half later, my first husband died at age 42.

When Diane Bingham asked me to do the poetry reading, I said yes, but as the time approached, I had severe misgivings. After all, I had divorced my husband before he died. All the other people at that retreat had probably still been married when they lost their spouses. When I arrived at the retreat site on the Hood Canal, however, the person who checked me in at the registration desk told me not to worry. She assured me that if I felt like grieving this was the place to do it.

When my husband died, I remember one my fellow agents at work saying to me, “What are you upset about? You divorced the guy, didn’t you?” That comment had pretty much slammed the lid closed on my grieving process. But at the retreat, having been given permission, I decided to do so. On Saturday evening after dinner, I passed on the egg race outside and went to a grief support group instead. Thirty-five or forty people were seated in a circle. The facilitator asked us first to say our names and then our spouses’ names, what they died of, when they died. I said my name was Judy, my husband’s name was Jerry, and he died of chronic alcoholism on New Year’s Eve of 1982/83. About a third of the way around the room, was a guy who said his name was Bill, his wife’s name was Lynn, and she died of cancer on New Year’s Eve of 1984/85. That caught my attention because we shared that day in common.

Next the facilitator said we should share. I said, I had divorced my husband in 1980. No one was ringing my bell at my Bay Vista condo, so obviously my life as a woman was over. I was raising my kids, writing my books, and making the best of a bad bargain. Then I waited to see what Bill would say. And you know what? He said NOTHING—not a single word! So once the support group ended, I went looking for him with blood in my eye. I found him out by the bonfire roasting marshmallows. I walked up to him with a chip on my shoulder and said, “So what are you, the strong silent type?” He said, “No, it still hurts too much to talk about it.” Within five minutes, I was literally crying on his shoulder. I remember thinking, “This is so stupid, but it feels so good.”

By the end of the retreat, I had invited him to the grand opening party for my first Beaumont book the following weekend. That first signing was our first actual date. At the end of that he asked if he could see me again. Unfortunately, July was already fully booked. When I told him so, he thought I was giving him the brush off. Once the first of August rolled around however, we started dating. Both our families had been through similar kinds of hell with spouses who eventually died of long-term chronic ailments. To begin with we simply compared notes, but that commonality meant that we talked about serious stuff from day one. Bill’s Lynn had been bedridden for three years prior to her death, and Bill had done much of his grieving prior to her passing. She and Jerry may have died on the same day, two years apart, but the June of 1985, both Bill and I were at similar stages in the grieving process. When Bumbershoot rolled around at the end of August, we were holding hands. By September we started having fun. Bill kept hinting around that he wanted to get married, and I kept telling him I wasn’t the marrying kind—that I had tried it once and wasn’t very good at it. But then someone offered him a job in California, and I was devastated. Hello! Obviously, no matter what I’d been saying to the contrary, I was interested in a whole lot more than a meaningless relationship.

On the 17th of October, Bill mentioned to his secretary at work that he was going to ask me to marry him that night. He told her he thought I’d either say no or that I’d have to think it over. His secretary bet him five bucks that I’d say yes. He lost. When he asked me, I said, “Oh, okay. When?” Our first thought was August of 1986. By the end of that week we’d moved the date up to Valentine’s Day. But then we found out that my chosen minister would be back in Seattle for Christmas. And that’s the story behind our ever-shrinking engagement.

December twenty-first of 1985 came complete with a severe weather event. A cloud of unrelenting fog settled over all of western Washington. From Bill’s house in Bellevue’s Eaglesmere neighborhood, we could see the top of Mount Baker in the far distance and the gold statue of Moroni on top of the Mormon Temple in Eastgate. Everything else was shrouded in fog. The minister managed to arrive late Friday night, with her plane having to land at Boeing Field instead of SeaTac. Bill’s mother and sister made it to the wedding, but my parents got as far as LAX and had to turn back. By the time we finally made it to our Saturday afternoon reception, no wonder we were on top of the world, and that fuzzy picture shows that clear as a bell.

You may be asking what was being our ever-shrinking engagement? We had both seen our previous hopes and dreams torn asunder, and we didn’t want to waste a moment of our lives together. As we headed out for a three-day honeymoon on the Oregon Coast, I don’t think either of us had any idea of how our lives together would play out. We didn’t anticipate that down the road there would be a wonderful Sunday like last Sunday when twenty or so of our kids, grandkids, and great grandkids would arrive for a day’s worth of celebratory bedlam in every corner of our fully decorated house. Nor did we anticipate that, 36 years into the future, just the two of us would celebrate our anniversary together at a romantic table for two in John Howie Steak in Bellevue. No, we didn’t see any of this coming, but not wanting to waste a moment of it was still the right thing to do.

And so, on this Christmas morning, with both Lil Yul Aften and our anniversary checked off the list for this year, I’m here to wish all my readers a Merry Christmas and a Happy New Year. And I can tell you true, agreeing to do a poetry reading for that widowed retreat in 1985 is probably one of the best decisions I’ve ever made.

PS. Over the years, I always believed that we met on June 21 and married on December 21, six months later to the day. It turns out I’ve always been calendar challenged, and I recently learned that June 21 of 1985 actually fell on a Friday. The truth is we married six month’s minus one day from the day we met.

37 thoughts on “Do Not Adjust Your Set”