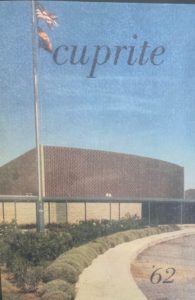 My writing chair is in the family room. The heavy sliding door in the family room is the most used door in the house. It’s also twenty-some years old and has become harder and harder to open and close. And now, for someone on a walker, it’s virtually impossible to use. So much so that we finally decided to have it replaced, and today is the day. Dogs and people are now ensconced in the master bedroom. Let’s just say it’s a tight fit. Can I manage to work here with the Sawzall buzzing in the background? We’ll soon see.

When I was writing the next Beaumont book, a character shows up on Beau’s doorstep bringing with him a paperback reprint of an old high school yearbook from Homer, Alaska. Well, as they say, what goes around comes around.

I graduated from Bisbee High school in 1962. The summer I graduated from eighth grade, they were building a new high school in the part of Bisbee known as Warren. Unfortunately, the completion date got set back, and the facility wasn’t ready by the time school started in the fall. As a consequence the first semester of my freshman year was at the old high school, up the canyon in Old Bisbee. The four-story structure is built into the side of a hill imaginatively named … wait for it … School Hill. By the way, Old Bisbee High School once made it into the Guiness Book of World Records due to the fact that it had four ground floors. That meant there were a lot of stairs. It was also a time of full skirts and crinolines. Wait, have I just managed to decode, all these years later, why so many boys tended to hang out around the bottom of those many staircases?

Second semester of my freshman year, we moved to the new high school, then as now referred to as New Bisbee High School on, you guessed it, School Terrace Road. It, too, is built on a hill, but not as steep a one, so it consists of three separate wings built up a gradual incline and connected by covered breezeways. The old high school had no cafeteria or auditorium. The new one has both along with a separate free-standing gym and band room. When we arrived for at the beginning of second semester in 1959, everything was brand, spanking new—the desks, the tables, the paint. The rose garden down by the flagpole, eventually planted and lovingly nurtured by longtime groundskeeper, Charles Baugh, was nothing more than a vague idea and a plot of dirt.

Bisbee was a copper mining town. The BHS yearbook is called the Cuprite, and at one time I owned the entire four-year collection covering my days at Bisbee High. My two older sisters, who were in school at the same time, had to share, but I was one my own. The yearbook for my freshman year was all about saying goodbye to the old school building and its uptown location. Because ours was the last classes that had attended both schools, the school, cover for the 1962 yearbook featured a color photo of the front entrance to the new school with the flagpole in the foreground and the auditorium and office complex in the background.

A few years ago, when several of my classmates came to dinner, I went to the library to retrieve my yearbooks only to discover that they weren’t there. Because we had the house in Tucson, I assumed they must have ended up on those bookshelves, but it turns out I was wrong. When I checked, they weren’t in Tucson, either. Somehow, in my many travels up and down I-5, the box containing yearbooks, not only mine, but those of my first husband as well along with two from our years of teaching at Sells had gone missing.

Pat McAdams—now Pat McAdams Hall—and I became friends in fourth grade. She lived just a block away, as long as I used the path between our fence and Mrs. Corbett’s garage to get there walking. And, in case you’re interested, Thelma and Mac McAdams’ house on Campbell Avenue is the one I pictured in my mind as being the house where Joanna Brady grew up.

Pat was visiting here from Florida on the occasion of our Cuprite-free dinner. Several years later, what should show up in the mail but a paperback reprint of the 1961 edition of the Cuprite, compliments of Pat. I was glad to have the one from our junior year, but this week the mailman and Pat came through once again. This time, when I opened the envelope there was the one from our senior year.

In the Beaumont book, the comments in the fictional reprint copy of the Log, are inscribed to someone named Edwina. That’s all the reader and the writer ever learn about her—the name. My original copy of the Cuprite had my name, Judy Busk, printed in gold letters on the front cover. The one I have now has no inscription, and the comments inside are addressed to Gary with no last name included. I suspect that it may have belonged to Gary Farley, but I don’t know that for sure.

I haven’t read those comments, because they were meant for Gary not for me. Reading them would be like snooping into someone else’s private correspondence, but I’m so glad to have the book itself. I’ve pored over the photographs of those young hopeful faces, noting as I went the ones that are sadly no longer with us. Since Gary Nolastname’s yearbook ended up in someone else’s hands, I suspect that he’s no longer with us, either, but I’m so grateful that someone made it possible for a copy of his Cuprite to come to me.

And so to both Pat McAdams Hall and Gary Nolastname, thanks for the memories.

Now I believe I’ll go out and get my steps, marching away while humming the tune of Onward Bisbee. In fact, I think I’ll go change my shirt so I can be wearing Red and Gray while I’m outside walking.

Most of my kids and grandkids are or will be Cougars from Washington State University. And although I attended the University of Arizona, making me a Wildcat, in my heart of hearts, I’ll always be a Puma from Bisbee High.