We left South Dakota in the late forties after my father had spent months being bedridden with rheumatoid arthritis. A doctor in Milbank told him that he needed to live in a high, dry climate. That’s how we ended up in Bisbee, Arizona. It was definitely high and dry. The changed climate baked the arthritis right out of his system, although I suspect that working as and underground miner in a copper mine also helped.

The arthritis went away, but another problem soon reared its ugly head—allergies. A neighbor, Mrs. Whitaker, I believe, told my mother that local honey would help, and off she went to the nearest bee-keeper and came home with a vat of mesquite honey. From then on there was always a honey-pot with a spoon in it on the breakfast table. In the mornings as our dad spooned honey onto his toast or in the evenings when he treated himself to a peanut butter and honey sandwich as a bed time snack, he liked to tell us that honey was helping him grow old gracefully.

And he did, just exactly that—he and my mother both. They did a lot of traveling together and enjoyed every minute of it. My father was nearsighted, and so were all his kids. In his eighties he underwent cataract surgery and emerged with 20/20 vision. My mother was not thrilled. She had known him with glasses for the first sixty years they were married, and she didn’t care for his new glasses-free look. I think part of her reaction had to do with envy. Surgery had was able to correct his vision problem, but Evie’s issues with macular degeneration were not fixable.

They were still living in Bisbee at the time. My mother couldn’t drive for obvious reasons, so my father was at the wheel. He, however, had issues with short term memory loss. He could see to drive, but he couldn’t always remember where he was going or even how to get back home. So for years they navigated around Bisbee with him doing the driving and with her telling him where to turn. Believe me, for the sixty-eight years they were married, Norm and Evie were a matched pair.

So today I turned 77. We had pancakes for breakfast. For dinner we went to our favorite restaurant, Angelo’s. It was wonderful to be in a busy, noisy restaurant once again. What did I do in between? I walked my 10,000 steps, I went to the hearing aid place and had my volume turned up, and then I went to have the pre-op appointment for my upcoming cataract surgery which will be happening over the course of the next two weeks. Oh, and then, I stopped by the jewelry store and picked up the ring Bill had ordered for my birthday. 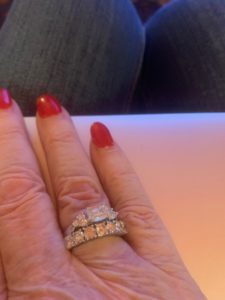 And speaking of that root canal, I’m not looking forward to it, but I’m glad to have it. My father grew up in South Dakota where he had limited access to fresh vegetables and good nutrition. By the time he was forty, he had dentures. Because of the care Norm and Evie lavished on their kids—all of us but one—the oldest who spent those critical formative years in vegetable-free South Dakota, still have our original teeth. That wasn’t just luck—that was parenting complete with good nutrition and regular dental care.

I’m not fond of honey, so I’m not sure I’m aging as gracefully as my dad. It was wonderful today to have birthday greetings coming in from so many of you. Thank you. And if you think that photo of the ring was bragging, it wasn’t. Because Bill wouldn’t have been able to order it, and I wouldn’t be wearing it, if it weren’t for all my loyal readers and fans.

So yes, thank you very much, I’ve had a happy 77th birthday.

And even if I don’t answer every one, I really do appreciate all those cards and letters from, as Glen Campbell would say, people I don’t even know.