Yesterday, while working on Unfinished Business, I encountered an old friend. When B. and Ali receive an early morning summons that takes them out of the house for an undetermined time, they do the only reasonable thing most dog owners would—they take their fictional long-haired miniature dachshund, Bella, along for the ride.

Of course, their Bella is also our Bella, the same beloved Bella we lost years ago. If you’ve read my novella, A Last Goodbye, you’ve read a fictional treatment of what we suspect the real Bella’s unknown and unknowable history was like. So today, ten years after that stormy October morning when she first came into our lives, it seems to me her story is worth retelling.

But first a small digression. Bella’s appearance in the Ali books is certainly not the first time one of my canine companions made it into print. Davy Walker’s Irish Wolfhound in the Walker books, Oh’o (Tohono O’odham for Bone), is patterned after our once-tiny pound puppy, Bony, who—much to our surprise, turned out to be an Irish Wolfhound when he grew up. Our golden retrievers, Nikki and Tess, named after Nicola Tesla, showed up in Beaumont number 4, Taking the Fifth, when Beau wandered out of his Seattle comfort zone into the wilds of Bellevue. And Mandy, a rescued platinum golden we had for only a matter of months, lived on for years in the Beaumont books as J.P.’s grandfather’s dog once Beau and the old man reconciled after a long estrangement. In other words, putting one of my dogs to work in fiction isn’t exactly news.

Back to Bella however. My grandson, Colt, my daughter, and I … (Please note I just used the correct first person singular pronoun instead of the supposedly upscale-sounding myself in this sentence. That’s a piece of current English usage that, as my mother would say, really gars my greet!) were on our way home from a shopping trip to Target when we spotted a tiny, terrified dog racing toward us in the middle of a relatively busy street about a mile from our home.

My daughter pulled over to the shoulder and turned on her hazard lights in hopes of slowing down traffic. Meanwhile, I bailed out the passenger door with a fistful of bread from a grocery bag, and went running after the dog—also in the middle of the street. By the way, this was not the current version of me that walks five miles almost every day. This was the much heavier, size 26 pants, me, chasing a dog up hill for close to a mile. I never would have caught up with her had it not been for the kind interference of a couple of college aged kids who managed to herd her into a spot where I could lay hands on her.

She was wet, muddy, shaking like a leaf, and absolutely scared to death. She also weighed a mere seven pounds. When I got in the car with her, Colt quickly stripped off his sweatshirt, and we wrapped her in that. She was wearing a collar but no tag. We went straight to my daughter’s vet’s office so they could see if she was chipped. She was not. So we spent the next couple of hours driving through the neighborhood where we found her to see if anyone recognized her. No one did—not people walking in the streets, or mailmen, or yard workers. She was a complete stranger.

The truth is, I wasn’t eager to take her home because, tiny as she was, she was also a dachshund, and as it happens, my husband has a painful history with at least one of those. On his first date with Lynn, the woman who became his first wife, he went to her house to meet her parents. (Remember those days?). Meeting the parents included meeting the family dog, a full-sized dachshund named Moxie. Moxie took one look at Bill, regarded him as the devil incarnate, and immediately attacked Bill’s achilles tendon, seriously enough to draw blood and wreck his sock. And despite the fact that Bill and Lynn married, Moxie regarded Bill as a mortal enemy for as long as the dog remained on the planet.

Since Bill didn’t much care for dachshunds, I naturally picked up on that. Some readers will probably recall that I often referred to such creatures in my books as WOFs (wastes of fur) or “yappy little dogs.” (And that’s the truth, by the way—they really are yappy!) So when Bill called to see what was taking so long at Target, I admitted we were dealing with a “dog problem.” I did not say we were dealing with a “dachshund problem.”

Finally, however, there was nothing for it but to go home and face the music. Bill came out of the house to greet us. When I handed her over to him, she was still shivering., and for Bill it was a case of love at first sight. As Bill and Colt walked into the house, five year-old Colt was explaining to Grandpa how we had found this “poor little fella” on the road. Grandpa said, “Colt, fella is a boy’s name. This is a girl dog.”

It wasn’t an easy transition. The name we called her certainly wasn’t the name she was used to. She had obviously lived in an apartment and had no experience with using a doggy door. We had no idea what she liked to eat, and the large pieces of kibble our remaining golden retriever Daphne consumed, didn’t work for Bella. That first night I made a bed for her in our bedroom. That was a fail. Overnight, she crawled into our bed and stayed there.

We did everything we knew to locate her owner, but all efforts came to nothing. In the process we took her to the Academy for Canine Behavior for some training to teach her the commands we used with our dogs. They told us that her bad breath was due to bad teeth, so our next stop was to a vet’s office where for $1400, they removed fourteen teeth and chipped her. Once we paid her dental bill, we figured she was ours!

Dealing with a new member of the family comes with a learning curve, and it didn’t take long to discover that Bella was leery of men, including our customary dog sitter. When we tried to leave her with him, she hid under the bed and wouldn’t eat. So two months after she came to live with us, when we had to make a trip to Tucson for a University of Arizona event, we decided to bring Bella along with us.

Going through TSA with a husband with two fake knees, an iPad, a computer, and two cell phones was always a pain. When you add in a leashed dog, it’s infinitely worse. On our way home, while I was stuck in the security line and Bill was being wanded, Bella slipped her leash and raced off into the terminal. I knew that if I ran after her without clearing security, the airport would be shut down, so all I could do was stand there and yell, “Bella, Bella. Come back!” And she did, scampering in a huge circle before returning to me at warp speed as only low-flying miniature dachshunds can do. And when we boarded the plane, everyone there knew her name.

That was December. When February came along, Bella was still scared of our dog-sitter—something she got over eventually because he’s a dog lover to the core. But for the driving part of the book tour that year, Bella came along. On the first day we did three events—one in Sun City, one in Apache Junction, and one in Scottsdale. (Back then, doing three events in one day was doable.) In the course of that day, Bella interacted with more than 1200 people. Everyone wanted to pet her and talk to her, but there was one woman in Apache Junction that I remember vividly.

When it was her turn at the table, she told me that her daughter, a huge fan of mine, had recently passed away from cancer. The grieving mother wanted the book inscribed in her daughter’s name. When I had done so, I sent her over to the table where Bill and Bella were sitting. The woman stayed with them for the next twenty minutes, letting Bella comfort her. When we got back to the hotel that night, all three of us, Bella included, were completely worn out, but from that moment on, she was Bella, the Book Tour dog! 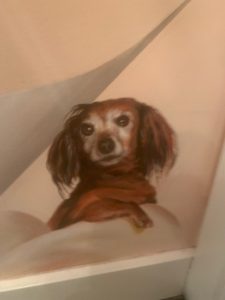 Bella – A bit of whimsey

We lost her a number of years later when she suffered the same kind of catastrophic back injury that nearly cost us Jojo last winter. But seeing her in the words I was typing this week brought her memory back to mind. After we lost her, when we had a muralist doing some decorative painting in our home in Bellevue, our interior designer had him put what he called “a bit of whimsey” in our downstairs powder room. In the front corner, usually hidden when the door is open, he painted a small life-sized portrait of Bella looking as though she’s climbing into the room through a corner of torn wallpaper.

During my first ever Bible study as a teenager, I remember being struck by that very long list of “begats” in the Old Testament. Now I see them in regards to our dog family. In a very real way, Mandy begat Bony because she taught us that even with two dogs in the household, there was room in our hearts for three. And Bella, beautiful Bella, begat Jojo and now Mary. Bella, with all those missing teeth was finicky about food, and ate her meals one piece of kibble at a time. Jojo learned her table manners from her, and she eats the same way. Mary grew up in a pack, and, despite having a Slow-Bowl, she down her food in seconds.

At the end of Credible Threat, Ali mentions that the problem with loving is that one way or another you end up losing as well. And that’s the problem with pets of all kinds, with the possible exception of parrots. Most pets don’t live as long as we do. We lose them, yes, but they enrich our lives as we go along, and I hope my including them in the background of my books has enriched my readers’ lives as well.

PS: As of today, October 2, I will cross the 9,000,000 steps mark. As of Thursday evening I’m at 8,990,000 so I should hit the mark with no problem. Of course, I’ll only have a thirteen day streak at that point rather than the one-hundred plus day streak I was working on before the Great American Smokeout, but at least I’m back in the saddle.

For all you other walkers out there, keep on trucking.