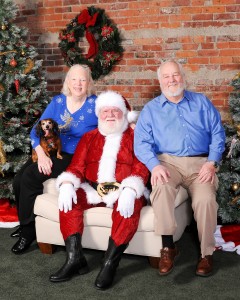 Judy, Bill and Bella wish you a Merry Christmas!

It’s early morning on Christmas Eve. My daughter had to be at her desk at work by seven this morning, and so, since it’s Christmas (as opposed to Winter) break, my grandson is here with me. He’s doing his thirty minutes of reading. A little later, after breakfast, he’ll be doing some typing practice on the iPad followed by a Grandma-administered spelling lesson.

It has recently come to my attention that the schools evidently aren’t teaching regular spelling anymore. When I asked Colt, “You mean they don’t give you words and have your write them ten times?” he gave me a blank stare. Nothing like that had ever happened to him before. Well, it’s happening now!

After spelling we’ll do some last minute Christmas shopping and take a trip to the bowling alley before we head for the Christmas Eve service at church. In other words, it’ll be a busy day, but a good day. And it’s reminding me of my mother.

This is one grandchild. For a few days. My mother pitched in for years, helping look after multiple grandkids after school and during summer vacations during the first onslaught of grandkids—the ones from my older sisters. Then, after a few years’ worth of break, along came a whole new flock of grandkids, a second generation of sorts. During one stressful summer, several of my mothers’ kids limped our way broken-winged back home, bringing our own kids, along with us. Marriages were in trouble; jobs had gone away, and our parents place on Border Road in Bisbee Junction was our chosen port in the storm.

Two of us, my younger sister and I, purchased mobile homes and parked them on our folks’ “back forty.” (Yes, I have personally lived in a mobile home.  It was a 14 x 70 and it was the best I could do back then. People who sneer at people living in mobile homes generally are . . . well . . . condescending and rude.) Which reminds me of the professor of anthropology from some university or other in California who wrote to me once several years ago saying that my books give a “good depiction of the lower middle classes in this country.” I’m guessing he wouldn’t have touched mobile home living with a ten-foot pole.

But back to that summer in Bisbee Junction. I was in my thirties. My mother was in her sixties. She cooked breakfasts, lunches, and dinners for a dozen or so people a day. There are photos of her dining room at the time with one end of the table surrounded by four high-chairs. That’s a lot of toddlers! We had help in the form of Dolores Decker, but every afternoon after lunch, my mother and Dolores did a whole production line of baths before nap time. And I’m sure my mother needed those naps more than ANY of the grandkids.

And so, as I’m treasuring this quiet morning with Colt, I remembering my mother and thanking her.

Evie Busk was a treasure, and I miss her.