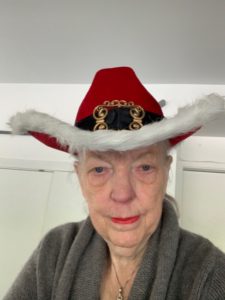 Yes, that’s a Santa hat, and no, you didn’t just blink and it’s already Christmas time again. It’s actually the middle of May in Seattle. So far this month we’ve already had twice our usual amount rainfall for May, and the temperature has barely made it out of the fifties. Last weekend, it was still snowing in the mountain passes. In other words while the rest of the country may be dealing with heat, tornadoes, wildfires, and droughts, we’re still wet and cold, and because of that, the hat pictured here is part of my usual walking attire.

I bought the hat several years ago from a costume shop. When I wear it out in public at Christmas time, I’m always a bit mystified that people seem to be so glad to see me. I’m sure they think I’m full of the Christmas spirit, and I probably am, but in actuality, I’m just wearing my hat. Why? Because it keeps the rain off my glasses. Since my recent cataract surgery, keeping rain off my glasses isn’t that big a deal anymore, but by now the hat and I are old pals, and it’s equally good at providing shade as it is for keeping raindrops from falling on my head.

During the winter I do a lot of inside steps—lots of 200-step laps from one end of the house to the other, with a few circles around the elephant table in the entryway to bring it up to the full two-hundred mark. Because of the many tight turns, inside steps take a lot longer than outside steps, so as soon as the weather starts turning even a little bit, I’m back outside, walking on the flat front driveway. By the way, I am not a hiker. I do not do hills and valleys. I walk on flat pavement. I’m happy to leave the mountaineering to the more athletic among us.

At the beginning of this week it was cold and wet. I wore my sweater topped by a water-resistant (not water-proof) jacket as well as my Santa hat. Twice I started out fully winterized and then ended up having to shed both the jacket and the sweater by the time I finished. The hat stayed on because, by the time the clouds rolled away, full sunlight on wet pavement made for blinding walking conditions.

So what have I learned while doing my outside steps this week? The Lenten roses, tulips, and daffodils are over, the Daphne next to the front porch is in full bloom, the red azaleas on the far side of the pavement are getting ready to bloom as are some of the newly planted hydrangeas. Not only that, I just noticed here’s a hint of lavender on the wisteria down in the backyard. In other words, cold and rainy weather notwithstanding, spring has finally sprung in Seattle.

And if you think this blog is something of a nothing burger, too bad. I’m pretty sure it beats the hell out of whatever’s on the news!

PS. The day after I wrote that cheery Tra La It’s May blog, it rained “pitchforks and hammer handles, as my mother would say, and I ended up doing ALL indoor steps. I walked the same number of steps—8500, but it took 88 minutes rather than 84. And I can tell you, that 42.5 200 step-laps are a lot more wearing than 17.5 500 step laps. But I still got my ten.