Fans are important to me. Early in my career while participating in what I’ve come to refer to as a group-grope signing (a signing with multiple authors) I had the honor of being seated next to Ann Rule. Naturally there were dozens of people standing in Ann’s line and very few in mine, so I had the opportunity of observing a pro at work. When she was signing someone’s book, she was fully engaged with that person—looking him or her in the eye; listening to what her readers had to say.

I personally didn’t sign many books that day but I walked out of the event with an invaluable take-away: Fans are important, even to what I considered to be a big time author. And Ann Rule’s lesson is one I’ve carried with me ever since because, for authors, readers are literally our bread and butter business. Each one is important. That’s why I personally respond to each and every email. It’s why I do book tours and why I write my blog entries and my newsletters. I don’t have a team of people going through my emails sorting out the “important” ones because, as far as I’m concerned, they’re all important.

In 1985, for my first original paperback I did 30 signings, despite the fact that I was told by folks in New York, “Nobody signs original paperbacks.” Well I did, not only for that book but for the ten more original paperbacks that followed. In the process I started keeping track of my fans in what is now my newsletter database. That way, when a new book is on the way, I can let readers know.

In the years since then, with the exception of last year, and unfortunately, this one as well, I’ve done approximately the same number of signings per book—25 to 30. If you multiply the signings by 63 books that totals out to almost 2000 events, not counting writers conferences and book festivals. That also amounts to a lot of author/fan interaction.

Over time, lots of those folks have become known entities. Most notable is Terry House from Colorado. So far she hasn’t ever been able to attend an in-person event. She tried once—driving 300 miles round trip to make it happen only to be turned away at the door by a librarian who said the room was too full. If I had known about it, I would have sent Bill outside and let Terry in. She’s an inveterate reader of my books and blogs, and someone I hear from on a regular basis. You’ll also find her name on the dedication page in Missing and Endangered.

Some of the faces at all those the various venues have not only emerged from the crowd, they’ve also morphed into friends. Off the top of my head I can name several: Loretta, Annie, Janice, Marianne, and Valerie among others. Some, like Terry, have become friends without ever attending a live event: Rosemary, Faith and Michelle, maybe? Some share happenings in their own lives that end up impacting the stories I tell, like the Christmas Tree Grandma whose tree from last year is still up fifteen months later, awaiting a time when her granddaughters will be allowed to come to her house to retrieve their gifts.

Among my regular event attendees, two standouts were always Rusty and Kathy Miller. Although they lived in Vancouver, Washington, for years they followed me to events all over southwestern Washington and northwestern Oregon—Longview, Olympia, Chehalis, Vancouver, Portland, Cannon Beach, Salem. Wherever I turned up, there they were, not as stalkers, mind you, but as genuine readers and fans.

By virtue of Rusty’s standing Kindle order, he would usually receive his book at midnight of pub day and stay up late finishing reading it. That way, on pub day his would be the first actual reader review in my in-box.

Last summer, when I was in the process of writing Missing and Endangered, he wrote me a heartbreaking note about the progression of Kathy’s Alzheimer’s and his long struggle to find a good care facility for her. That was when I decided that their names, along with that of Terry House, would be on the dedication page of my upcoming book. Later, when he wrote to say that he’d finally been able to locate a suitable placement for Kathy, I was deep into writing this book and was about to introduce a new character—someone who steps up in the story to help heal a fractured family. And then a brainstorm hit. Why not use Rusty? So I did.

I included him in the book without ever letting him know that not only were he and Kathy on the dedication page, he was also IN the book. The last I heard from him was just before Christmas when he wrote to say that although Kathy no longer knew who he was, he visited her often. He also mentioned that the restaurant where he was ordering his take-out meals for one was bringing him a free Christmas dinner on Christmas Eve.

Pub date came. I fully expected to hear from Rusty first thing that morning because I knew he’d be delighted to find himself in the book, but being preoccupied with concerns about the upcoming Poisoned Pen event, his absence from my in-box didn’t really register. Then, late that evening, with Poisoned Pen in my rearview mirror, an email came in from his address. Instead of being from Rusty himself, however, it came from Rusty’s and Kathy’s daughter, letting me know that he had passed away on December 30th. 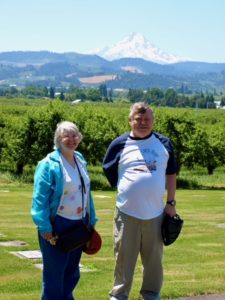 Damn! Why didn’t I send him an advance copy? Why didn’t I tell him? Because I wanted it to be a surprise, and now the surprise has arrived too late. I have to say, it was a very sad ending for the M&E pub date, and I tossed and turned about it late into the night, wrestling with all kinds of regretful wouldas, shouldas, and couldas.

Their grieving daughter has now received a signed copy of Missing and Endangered, personalized in honor of her parents, but that doesn’t get me off the hook. Or you, either, for that matter.

If there’s someone out there you want to honor or even if you just want to say hello, do it now.

Tomorrow may be too late.

And since I’ve just passed along some excellent advice, I’m going to take it. Penny and Wally, for some reason there seems to be a beloved Aunt Penny and Uncle Wally in the next Beau book, Nothing to Lose.