Each night, as I sit on the edge of the bed slathering my face with Neutrogena Night Cream, I can’t help but wonder if I’d started slathering it on years ago, would I look decades younger now? The truth is, the answer is no. The way I look and am now was charted in my DNA decades before I was born.

I’m always amused when someone mentions the words “someone of your stature” when they’re doing an introduction. I’m sure they’re talking about my reputation as a writer, but I can’t help but think about my physical stature which is to say six-foot one. All too often someone meeting me in person for the first time will blurt out, “You don’t look this tall on your book covers.” Of course not, because for cover photos I’m usually sitting down. From the waist up, I’m not that tall. According to my husband, I have an extra six inches in my legs. (If you were to see my lanky fifteen year-old grandson, you’d know that runs in the family.)

And where did that tall trait come from? My father’s side of the family. My great grandmother, Grandma Madsen, was more than six feet tall. So was her daughter, my Grandma Busk. The circle of permanently rough skin that gradually appeared on my forehead a few years ago and leaves a shadow between my eyebrows is something I remember from Grandma Busk’s face. Fortunately, I didn’t inherit her rectangular figure—the curves came from my mother’s side of the family—or her essential mean-spiritedness. Grandma Madsen had a sense of humor. Her daughter did not.

Humor, laughter, and singing came from my Anderson and Fromm strands of DNA. Nearsightedness came from both sides.

It’s been cold and wet the last couple of weeks, so I’ve been doing inside steps rather than outside. No, I don’t have a treadmill. I have a complex many circled route that, in one stint, is good for 1900 steps, give or take, depending on whether the phone is in my hand or in my hip pocket. 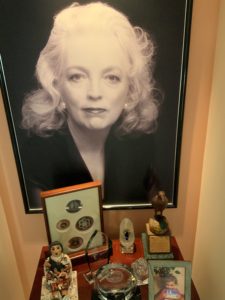 On Thanksgiving Day, I was walking the long straightaway down the hall when I looked at the scene at the end of it—something our decorator created and calls “the shrine.” It’s a collection of my writing awards as well as a photo of the “real” Athena, along with some treasured horsehair baskets from the reservation. Overlooking the awards there’s a photo of yours truly.

In the early nineties, after my daughter, Jeanne T. returned from Arizona, her Mother’s Day gift to me was a joint session at a local Glamour Shots establishment. One of the photos taken that day is the one you see posted here. For those of you who have never experienced a Glamour Shot photo shoot, here’s what happens. You go there. They fix your hair, your clothes, and your makeup, and then they take the photos before the makeup has a chance to melt. The resulting prints are expensive, and if you want to use them for professional purposes, you have to pay even more. But with this particular photo, we did just that. In fact, this is the image that was posted on my website long ago when Melissa G. sent her very nasty but memorable “bag over your head” comment.

So on Thanksgiving Day, I found myself being thankful for the very special gift my daughter gave me nearly thirty years ago. That photo offers a visual memory of how I used to look even if I don’t look that way now, but it’s also a very tangible symbol of a daughter’s enduring love for her mother.

And I’m pretty sure that generous side of my daughter’s nature came from the Anderson side of my family tree.

19 thoughts on “Two Sides of the Family Tree”