We all know where we were on the morning of 9-11. That was an appalling day, one that shook the world. When the planes stopped flying, everyone was affected. In the upper left-hand corner of the country, what happened on the East Coast was close at hand because of what we saw on our television sets, but it was a more distant reality for us than it was for those who were able to see the still smoldering ruins of the Twin Towers or the Pentagon. The fact that the planes weren’t flying overhead meant that the skies were empty, but it didn’t directly affect our lives, until it did.

That happened several several weeks later when it was time for us to go to Tennessee for a book festival. When it was time to make our flight reservations, planes still weren’t flying. So Bill and I looked at each other and said, “Okay, we’ll drive.” And we did.

It’s a long way from Seattle to Nashville, and it’s not a straight line. There may have been satellite radio stations back then, but we didn’t have access to them. We’d find a good station that lasted for a couple of hours, but then we’d be out of range, and it would be gone. Finally in Texas somewhere, we hit the wall. For years I had been hearing about Harry Potter. I remember being on a book tour once in Boston. I was eating alone in a hotel restaurant when a family came in. Well … not exactly a family at the time. It was a man and a woman accompanied by two girls who were ten or so. The couple was dating and in love. The two daughters—one apiece? Not so much. But they both came armed with dueling copies of J.K. Rowling’s latest book. The two girls sat at the table, both of them engrossed with the stories of Harry Potter and his pals, while their respective parents plotted out the details of their new lives together. Thinking about them now, I have to hope everything worked out well for all concerned.

So in Dallas, we stopped by a Barnes and Noble and bought a cassette unabridged audio version of the the first Harry Potter book and soon we were lost in that world. We would go into restaurants where TV sets were still focused on the devastation in New York City. That’s what the people there were talking about. We were discussing what we’d learned about the intricacies of Quidditch. I believe there were four Harry Potter books in print at that time. We listened for the remainder of the trip. We finished listening to the last chapter of the last one available in the parking lot of our hotel in Boise, Idaho, on the night before we made it home, but from then on, we were die-hard fans and we listened to the others, too.

When our grandson was old enough to listen to stories, I read the Harry Potter books aloud to him each night before he fell asleep, even when he was in Washington and I was in Arizona. Cell phones made that possible. Before long he was old enough to read them on his own, and he’s a passionate reader to this day.

Harry Potter is yesterday’s news right now, but the magic in those books is endlessly fascinating. So for parents at home with kids locked out of school, and for grandparents stranded far away from beloved grand-kids, please consider reading to them aloud! Learning about Harry Potter will be good for them, and it’ll be good for YOU!

My daughter is still working at Costco headquarters in Issaquah. When I started getting my steps, she started getting hers. At lunchtime, she goes out to walk in the now mostly-empty parking garage in order to get her steps. She calls me, and we’re able to walk together. Right now, we can’t see her in person, but walking together and talking on the phone is good for staying in touch —for both of us.

I wrote a blog/newsletter posting last week in which I recommended three books—The Madonnas of Leningrad, Mr. Pip, and The Guernsey Literary and Potato Peel Pie Society. The books are all incredibly different, but they all have three important components in common. They all take place in wartime. Another is the need to persevere in the face of tough times. The third is the importance of art in sustaining that perseverance. After thinking it over, I reconsidered sending out that blog because, in the face of all the gloom and doom infecting the media right now, I decided what I had written was too dark, because those books are dark. I still have that original blog entry, and if someone wants to see it, I’ll be happy to send it out upon request. All people have to do is write to me at jajance@me.com.

As I’ve said many times in the past, the ancient sacred charge of the storyteller is to beguile the time. My lunchtime walk/talks with my daughter are good for 3000 to 3500 steps. That leaves lots of steps still to be done. So I’ve taken to listening to audio books the rest of the time. I’ve become a huge fan of a guy named David Rosenfelt. His books are perfect for me—light-hearted murder mysteries with dogs. What could be better? I especially like his Andy Carpenter books set in New Jersey with a dog-loving defense attorney as the main character. By the way, for you IORs (In Order Readers) out there, the first book in the Andy Carpenter series is Open and Shut.

In this time of social distancing, ordering books on-line and buying books in grocery and drug stores are the only avenues available for obtaining new books. Libraries may not be open, but readers may be able to order downloadable books from their local libraries. I know that many of my readers are dedicated DTRs (Dead Tree Readers), but maybe now’s the time for us seniors shut up at home to venture into the world of e-books for new books.

This is also a time when it might be a good idea to revisit some old books. In the face of uncertainty, the comfort of hanging out with familiar characters is like chatting with old friends.

We need to be at home. If what’s on TV isn’t helping us right now, perhaps we should look for guidance and solace in books and stories, including most definitely the Good Book, if you’re so inclined. 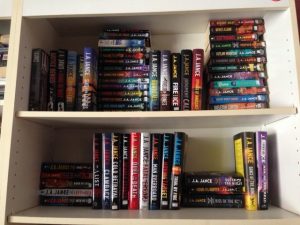 When it comes to revisiting old books, I’m including a photo one of my Canadian fans sent to me this past week. Thank you, Elaine. You really brightened my day and made me glad that I’m … well … a storyteller whose stories are helping people through hard times.