Herman Teale Janc, the only father-in-law I was fortunate enough to know, passed away three months after my daughter arrived on this planet. She was born in mid-December, 1972, and Herman and Mary Grandma came to visit us at Three Points over Christmas. It turns out that was the only time Herman ever saw her. Three months later, at age 53, he was dead of a heart attack suffered while he was at the Nevada Test Site north of Las Vegas where he had worked for years. When Herman died, I was so glad that I had stuck to my guns and named my daughter after him. She was and is a very real legacy.

No, I didn’t name my new baby Hermione, not in 1972. J.K. Rowling and her Hermione wouldn’t show up until decades in the future. No I used Herman’s middle name, Teale. Her first name is Jeanne, pronounced the way it is pronounced in France— Zhun. As far as I’m concerned, Zhun Teale sounds better than the much harsher Jean Teale any day of the week. Believe me, she’s had to fight for that name every day of her life since then—at school and at work.

At the time Herman died, Mary Grandma was working in the nursery at the Showboat Lanes at the Showboat Casino a few blocks from her house. Her job was literally within walking distance of home. It turns out Showboat Lanes was a very busy place and still holds the record as the bowling alley that hosted the greatest number of pro bowling tournaments in the US.

Mary Grandma was a gorgeous woman with an hour-glass figure and movie star good looks, so it wasn’t surprising that, once a suitable period of time had passed after Herman’s death, that she came to the attention of her boss, Frank Mirabelli, the guy who managed the Showboat Lanes. He was a handsome former pro bowler who usually wore—guess what–bowling shirts. Mary Grandma and Frank were married in a beautiful chapel just off the Strip. Unfortunately, their marriage was, as we say around here, short but brief, and eventually ended in divorce. End of story. Right? Well, not quite. 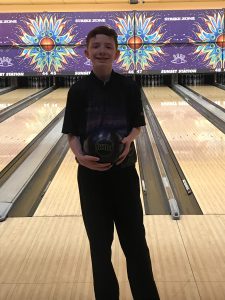 Our grandson, Colt—Mary Grandma’s great grandson—is a bowler—a thirteen year-old championship bowler. He’ll be bowling this weekend at the JBLT (Junior Bowling League Tournament)26 at the Sunset Lanes in Las Vegas where, at the banquet on Saturday, he’ll be honored as the Pacific Northwest Bowler of the Year.

He bowled there last year, too, and one of the guys who runs Sunset Lanes overheard Jeanne T. talking about her long ago connection to Frank Mirabelli. He came over and introduced himself. With any kind of luck, whether Colt wins a bowling plaque this weekend or not, he may be coming home with a a jacket with the Mirabelli name on it.

The Showboat is long gone. Herman, Mary Grandma, and Frank, too, are all gone. There is no DNA relationship between Colt and his late step-great-grandfather, and yet—magically—the connection exists. And you know what?

It makes me smile.