Between the Tucson Festival of Books and the A List tour, I’ve spent the better part of a month on the road.  With Bill stuck at home with health issues for the Arizona part of the tour, I did some of my own driving. In Phoenix, I had the luxury of having a media escort, Nancy Stuebe, who besides being the epitome of professional, was also great fun. Not only that, she saw to it that I made it in and out of my favorite Phoenix restaurant, La Piñata, THREE times in five days. That’s a much appreciated record! 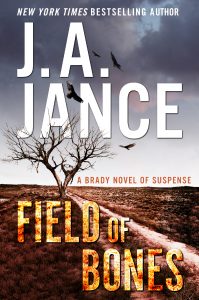 The big news right now is a call out to all my DTRs of the paperback variety because the mass market edition of Field of Bones, Joanna #18, goes on sale April 30. (Some folks object to my calling my die-hard paper and ink fans Dead Tree Readers. Most get a kick out of it. For the record and out of deference to the grammatically inclined, the word Dead in that phrase is an adjective modifying the noun Tree. It is NOT it is not meant to impugn either the the age or the relative vitality of ANY of my readers!)

In terms of writing, I’m two books away from Field of Bones, but here’s a word of warning as well as a spoiler alert: You most likely won’t be able to finish reading this book without encountering a terrible craving for meatloaf. As a public service you’ll find a recipe for Grandpa Jeb’s meatloaf printed at the back of the book.

Now on to other news. It’s Holy Week, a week that will be remembered for the destruction of Notre Dame Cathedral in Paris. People are vowing that they will rebuild that 800 year old gem of Christianity. I trust that will be the case, although I know it will not happen in my lifetime.  Yet I’m hopeful too, because this week, last Sunday in fact, the whole world witnessed a living, breathing example of redemption.

I paid attention to only one Tweet this week, and that was from a very noisy bird, singing his heart out on the 14th Tee of the Augusta National Gold Course.

Twenty-two years ago, we all watched in wonder as a talented young golfer named Tiger Woods appeared on the scene, seemingly out of nowhere, and walked away with a coveted green jacket from the Masters. I remember hearing television announcers at the time raving about how good he was and that no one would be able to beat him. For a time that seemed to be the case—right up until it all fell apart.

After years of winning,Tiger seemed to lose his way and went wandering in a very dark wilderness. He had physical issues with his back and his knees that crippled his game and required multiple surgeries. I have no doubt that his much publicized addiction problems grew out of a dependence on what were initially doctor prescribed medications. Those have been responsible for all too many falls from grace and family tragedies—the kind that never make it to news headlines but that nonetheless leave behind a trail of tears and broken hearts and bodies.

So last Sunday, after an eleven year drought between Masters wins, Tiger was back. He’s older now, and wiser, too, it seems. His hair is thinning. Maybe some of the fire has gone out of his game, but he played with a kind of resolute determination that was inspirational to anyone who witnessed it. And after sinking that last game-winning putt on the eighteenth green, the heartfelt hugs he gave to both his mother and children left me with goosebumps. He had come back from the depths and battled his way to triumph. It’s a story that’s familiar to me, because I’ve lived it. I, too, know something about loving and losing and rising from the ashes.

Last week in Camp Verde, a woman came up to the signing table, touched the cover on her copy of my book of poetry, After the Fire, and said, “You wrote this just for me.” If you’ve come to one of my presentations, you’ve probably heard me read from and talk about that book and the journey it describes—that of loving and eventually losing a husband to the grip of addiction. But it’s also the story of coming out of that darkness and finding a way to not only go on but eventually win through.

The signing line at Camp Verde wasn’t a place for a private conversation, so I asked the woman, whose initials are EJP, if she would mind sending me a note. With her permission, I’m quoting her e-mail in its entirety:

“I had the pleasure of meeting you at your book signing in Camp Verde. The life stories you shared that day were funny, charming and one even frightening. It was certainly a wonderful way to spend a little time. While waiting for you to sign my copy of After the Fire, I wondered if I should mention the impact that book had on me. I decided you needed to know. I made a comment to you that, “You don’t know it but you wrote that book for me”. I have read many books that have impacted me profoundly but none as much as this particular one. There are many of us with stories of broken hearts and broken promises that never find our voices. This book lets us all know that we are not alone. I am so very grateful to you for putting your story in print for all of us. I feel lucky to have met you. Thanks again for the wonderful book.”

Whew. Thank you, EJ. That comment from you, received days after I left Arizona, made the whole tour worthwhile. There’s nothing that means more to a writer than knowing something you have written really impacted a person on the “other side of the page.”

And so for those of you who have never been to a presentation, here’s the title poem from After the Fire.

I have touched the fire.
It burned me, but I knew I lived.
It seared me, but it made me whole.

He called me.
I went gladly though I saw the rocks.
Fell laughing through the singeing air.

I have touched the fire.
I’ll live with nothing rather than with less.
The flame is out. There’s nothing left but ash.

It’s only when you hit that very low, dark place—the point of no return where there’s nowhere left to go but up—when you can finally start the long climb out of the pit.

God willing, it will be true for Notre Dame.