My husband Bill, my second husband—the good one—who is currently recovering (successfully) from back surgery, has often said the following:  “With you there are no short stories—only long stories.”  And that’s the case today, so buckle up, my friends, you’re in for a ride.

In the late seventies and early eighties, I lived in Phoenix while working in the insurance industry.  Those years constituted the darkest time in my marriage to my first husband, a man who died of chronic alcoholism at age 42, a year and a half after I divorced him.  I often drove from appointment to appointment, wrestling with the idea of staying in my marriage or leaving it.  If I left, would I be able to keep a roof over our heads and food on the table?  Since those were questions with no easy answers, I often listened to music as a distraction, most especially music that spoke to where I was in life:

I hate to leave you, but leave you I must.

I am woman hear me roar

In numbers to big to ignore.

And Janis Ian, I loved all of her heartbreaking lyrics:

In the winter extra blankets for the cold, Fix the heater getting old, I am wiser now I know but still as big a fool Concerning you.

But the song of hers that spoke to me the most, both then and now, is her iconic ballad, At Seventeen.  For a girl who was six feet tall in seventh grade, who had feet the local shoe salesman called “gunboats,” who wore glasses, and who was smart, middle school and high school were both nothing short of hell on earth.  Like the girl in Janis’s song, I was one of the girls for whom Valentines never came and “whose name was never called when choosing sides for basketball.”  As a perpetual outsider, I felt a real kinship with those words and with the artist singing them.  I remember telling people that I felt as though Janis Ian and I had walked “in the same moccasins.”

These days that’s probably considered an outrageous example of “cultural misappropriation,” but after spending five years of my life working and teaching on a reservation, I think I’ve earned the right to say that.  And if you disagree?  That’s perfectly fine, just don’t be disagreeable about it.

But I digress.  Fast forward a couple of decades.  When I started writing and doing presentations at book signings, I often ended by singing that song “At Seventeen.”  It closes with these heartfelt words:

Dreams were all they gave for free

I end my presentations with that song because those words are incredibly true for me.  The dream of becoming a writer was all I had back in those tough “old days,”  and my readers—my very loyal readers—are the people who have made that dream come true.

So now we fast-forward a couple of decades.  It was 2008.  Bill’s much needed and previously scheduled bi-lateral knee replacement surgery suddenly got moved from August to June, and that was a good thing, except there was a conflict.  On the day he was supposed to be transferred from the hospital to rehab, I was supposed to be in Boise, Idaho, as the keynote speaker for a writer’s conference—a date that had been set in stone more than a year earlier.

Let me say here that is it especially provoking when your kids suddenly grow up and start spouting back all the things you tried to teach them.  So muttering under my breath, I shaped up, flew to Boise, and did the keynote at noon on Saturday, ending with singing At Seventeen.  I thought that was the end of it, but it wasn’t.  On Sunday night when I was back home, I opened my computer and there was a message from Janis Ian.  “Hey,” she said, “I heard you sang my song in Boise yesterday, and that you did a good job of it.”  Someone at the conference who was a fan of my work and of Janis Ian’s work went straight back to Nashville and tattled on me.

And that was the beginning of a friendship that endures to this day.  Janis and I are both very different.  She is gay; I’m straight.  She’s short: I’m tall.  She’s a Democrat; I’m a Republican.  She’s Jewish; I’m protestant, but the point is there’s much more that unifies than divides us.  We’re both women who stand with one foot in the world of art and the other in the world of business.  We’re both in long-term, committed relationships—and when the four of us are together, we have FUN!

And how did this happen?  It happened because, at my daughters’ insistence, I cowgirled-up and kept my promise.

So now we fast forward another decade to 2018.  Bill has another round of long-delayed surgery, this time for his back, that was scheduled to occur exactly a week before an event in Newport News, Virginia.  It was a trip we had planned to make together, but clearly that was off the table.  Those of you who read last week’s blog, know that between looking at his challenging recovery and watching Hurricane Michael approaching the East Coast, I wasn’t exactly enthusiastic abut going.  But go I did.  I had signed a contract that said I would be there, and so I was.

The weather report was dicey, even in Virginia.  Hurricane Michael sped up once it made landfall and moved up the coast faster than anyone expected.  Originally it had been predicted to hit Newport News around 9 am on Friday, but by the time I was headed for the event Thursday evening, it was already raining.  I can tell you for sure that my “moisture barrier” hairspray wasn’t nearly up to the task!

Readers of the blog also know that I’m a self-identified fan of ID-Discovery, and I make no bones about the fact that Joe Kenda, Homicide Hunter, is one of my all time favorite shows.  So I was seated on stage, getting ready to do my warm-up Q and A when a lady came up to me carrying a copy of Proof of Life.  “You mentioned my husband’s name in this book,” she said, “Joe Kenda.”

I didn’t see my eyes, but they probably bugged out of my head.  “You mean Joe Kenda, Homicide Hunter?” I stammered.

“Yes,” Kathy Kenda said, pointing.  “And he’s right over there.”

She had him come up and we had the photo op moment —frizzy hair and all!  And after the event, he came up and told me I was a talented “storyteller and raconteur.”  I call that high praise coming from someone who is definitely a master of both those things.

So what’s the moral here?  Keep your promises!  Because of kept promises I now get to be friends with some of the real icons of my life—Janis Ian. Joe Kenda, and Kathy Kenda, too.  Let’s all take a moment to honor the long-suffering spouses of law enforcement officers everywhere—the ones who wait with bated breath through every shift!

Yes, Janis, dreams may be all they ever gave me for free, but boy howdy is it fun when they do come true. 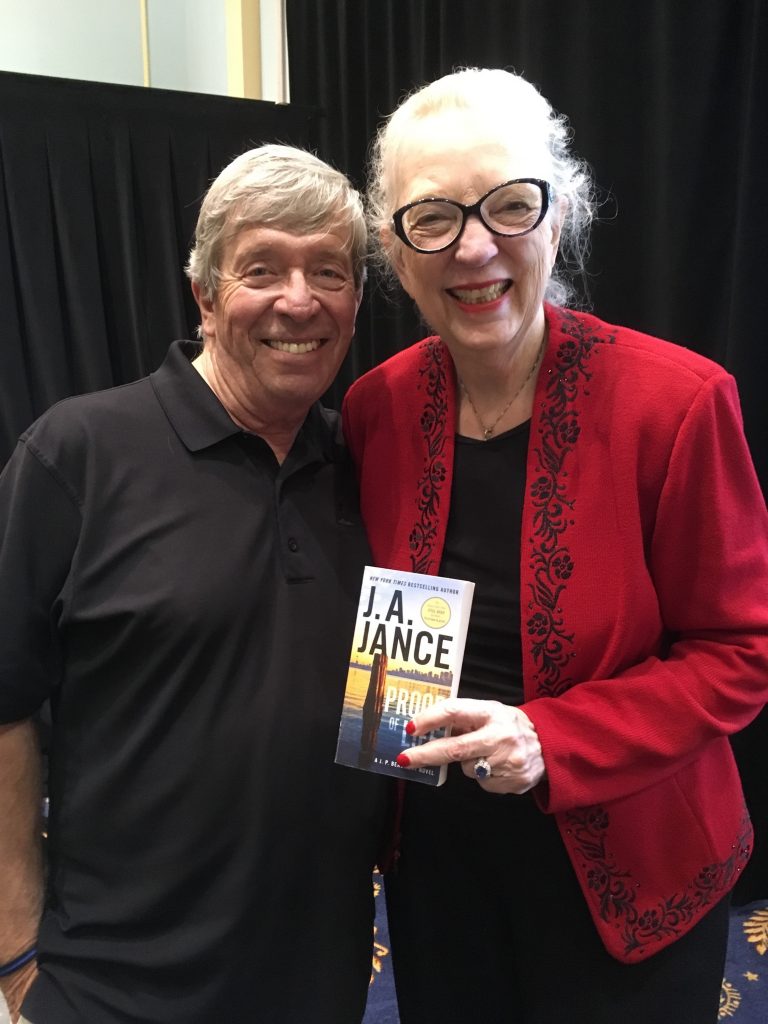