I woke up this morning in the Davenport Hotel—the old Davenport—in Spokane.  (When I was growing up we had a maroon leather couch that my mother always called the davenport.  How davenports morphed into couches and then into sofas is one of the mysteries of the universe.)  And what the hotel Davenport has to do with furniture davenports is another mystery, but it’s a gracious old hotel and our spacious corner room has what I consider a book tour miracle—two comfortable chairs as opposed to one comfortable chair and one desk chair.  In terms of comfort, the people designing ergonomic desk chairs could take a lesson from the people who used to design … well … davenports.

So this is Tale from the Trail number four.  That means we’ve been on the road for more than a month and more than 4000 miles.  Today in Spokane is the last major day of the tour—two events and one interview.  In a little while I’ll need to get my hair washed and ironed and my make up on to be ready for the interview.

But before I do that, I’d like to tell you about a guy named Howard Malley.  Howard became a fan of mine early on. His was one of the first names in my database when it switched over from being the Doghouse Call List—from my rolodex—to an e-mail list.

The people reading this probably never heard of Howard Malley, but they’ve seen his name and I’m pretty sure most of them are familiar with his work.  He was part of the team that produced the video for “We Are the World.”

Howard and I corresponded over the years.  A book would come out, and he’d let me know what he thought of it.  During that time I learned something about him.  He lived in Westlake Village in California, had a wife named April, and had been medically retired from the entertainment industry for a number of years due to muscular dystrophy.

A couple of years ago, he sent me an e-mail asking if I would consider putting him in one of my books as a character.  I told him no, I wouldn’t do that, but I would dedicate a book to him.  That book was Proof of Life.  The dedication reads:  For Howard G. Malley whose ongoing battle with Muscular Dystrophy constitutes a daily and courageous Proof of Life.

Just prior to the publication of Proof of Life, Howard’s health situation worsened to the point where he had to move into an assisted living facility.  When the  Duel to the Death tour schedule was posted, Howard sent me a note.  He was excited to see the Burbank event listed on the calendar and was making arrangements to come.  He also asked if I would mind if he had a T-shirt made, featuring the cover of “his” book.  I told him to have at it.

On March 24, the day before the Burbank appearance, he sent me a note saying the T-shirt had arrived, but he had come down with some kind of intestinal bug.  Since he didn’t want to risk spreading it to me, he said he wouldn’t be coming to the event.  As an author on tour I appreciated his decision not to share, and I told him how sorry I was to miss him. 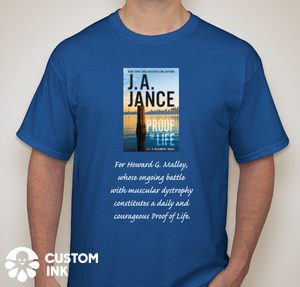 We were back in Seattle when I heard from April that Howard had passed away on March 29.  I’m so sorry I missed him, and I know April misses him terribly, too, but here’s the thing. I’d like the whole world to see Howard’s T-shirt.  And do you know what else?  I just gave everybody reading this what’s commonly referred to as an ear worm.  They’re going to be humming, “I’d like to buy the word a coke” for the next several days, and they’ll have no idea why that happened or where it came from.

It came from you, Howard Malley, so rest in peace.  I think we both just made lots of people smile.