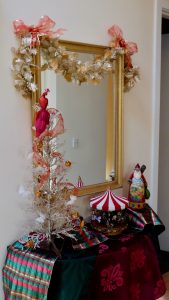 Christmas comes early at our house this year, a week and a day early in fact.  In the early sixties, my mother repurposed an old Scandinavian custom, Little Christmas Eve, that occurs the Sunday before Christmas.  Unless Christmas Eve happens to be on a Sunday—which it is this year.  So this year’s Lil’ Jul Aften happens this Sunday.  (By the way, that J. is pronounced like a Y., as in YULE!)

Starting the day after Thanksgiving, while I had my nose buried in the computer and was finishing a book, our whole house was being wrapped for Christmas.  This year Bill and our decorator, Jim Hunt, decided it was time to give our big tree a rest. Rather than a ten foot evergreen with multicolored lights filling the entire entryway, we have a small grove of white and gold trees decorated with red cardinals and white and gold poinsettias. Every window, every wall, and every table has its very own piece of holiday decor. It is not an instant process!

Some of our long term decorations emerged from their boxes a little worse for wear. The last of the snow globes developed a leak over the summer and had to go away. This is the final year for the beaded red and green doily a fan named Alva Bullard made for me years ago.  One of the strings has broken, and the doily is starting to shed beads. With curious dachshunds in the household, having stray beads lying around is not a good idea. 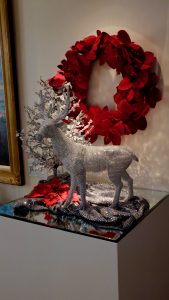 Each year, when I read the advice columns about people being pulled this way and that for Christmas Eve and or Christmas Day, I’m always in awe of Evie Busk’s wisdom. While I was married to my first husband, she made Lil’ Jul Aften into a holiday tradition I could celebrate with my family. Once I was divorced, Lil’ Jul Aften became my Christmas with my kids.  After Bill and I married, it became even handier. If people come to Lil’ Jul Aften, they can be anywhere else they need to be on Christmas Eve or Christmas Day or even on New Years, for that matter. With in-laws and out-laws to be taken into consideration, having a holiday that doesn’t infringe on anyone else’s can go a long way toward smoothing out the bumps in the holiday road.

When the grandkids were younger, we made a whole weekend of it—with shopping and a show on Saturday and a celebratory dinnertime feast and gift exchange on Sunday. Now people are older—most of the grandkids have actual JOBS!  Even the younger ones are too old at this point for the Teddy Bear Room at the Fairmont or the carousel in Westlake Center. We’ll gather for pizza on Saturday afternoon and see Irving Berlin’s White Christmas at the 5th Avenue that evening.  On Sunday, instead of trooping out for a Santa photo shoot appointment, Santa and the photographer will be coming here.  (At least one of our first great-grandson’s Santa photos will be shot in front of our grove of trees.) And rather than dinner, we’ll be having brunch followed by an early afternoon gift exchange. For people who have to be at work the next day, heading home earlier than dinner time will be beneficial. 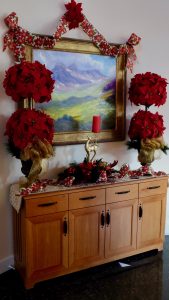 The wonderful thing about Lil’ Jul Aften is that it’s an entirely moveable holiday.  The year of the Hanukah Snowstorm, no one could get here that Sunday, and the whole party got moved to the Sunday following Christmas instead of the Sunday before.  Another great thing about having a purely private holiday is that if you forget something at the last minute, all the stores are open.

So if some of you out there are struggling with an emotionally weaponized holiday season tug-of-war over where people need to go and when, please feel free to take a page out of Evie Busk’s playbook and give yourself the blessing of an optional Scandinavian Holiday.