It’s hard to believe that a publication date can sneak up on me, but that’s what just happened. My new novella, a joint Ali Reynolds/Joanna Brady effort called No Honor Among Thieves, goes on sale today, Monday, November 16. 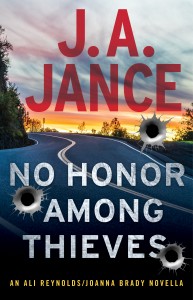 Wait.  Did I just say a joint story? One with both Joanna Brady and Ali Reynolds in the same piece of fiction?  Some of you may be saying, “It’s about time,” because plenty of my fans have been asking for one of those for a very long time.When I was asked that question, I replied that it wasn’t possible, no way José. But it turns out I was wrong. Now it’s happening, and if I do say so myself, No Honor is making a bit of publishing history. Here’s why:

I have two publishers. I am contracted with HarperCollins to write the Beaumont, Brady, and Walker books.  Simon and Schuster owns the ones featuring Ali Reynolds.

Ever hear of the Capulets and the Montagues from Romeo and Juliet?  Or the Jets and the Sharks from Westside Story? Let’s just say, getting everybody from two different publishing houses to pull in the same direction at the same time isn’t necessarily easy. And the truth is, the legal ramifications and complications of writing a joint book that crosses all those lines are overwhelming. Dividing up royalties, publicity budgets, editorial responsibilities? Can’t be done. Has never been done.

But this summer, my then current and now departed spark-plug of an editor at S & S, Sally Kim, came up with an intriguing idea. Novellas aren’t exactly new, but they’ve gained a lot of traction as vehicles for attracting new readers to an ongoing series. Sally’s suggestion, which was greeted with enthusiasm by my HarperCollins editor, Lyssa Keusch, was that I write two Joanna/Ali novellas—one for S & S and the other for HarperCollins.

No Honor Among Thieves is numero uno. This is an S & S novella. That means it will be an e-book originally and will appear in paper later this year in the back of the paperback edition of Cold Betrayal.   Warning for my DTRs—my Dead Tree Readers: There will be NO separate Dead Tree printing for No Honor, but there will be an audio version.

Please do not order No Honor for the princely sum of 99 cents and then send me a note complaining that it was too short. Novellas are short. They are longer than a short story (5,000 words or so) and shorter than a novel (100,000 words give or take.) Novellas are approximately 20,000 words.

In the back of the novella, you’ll find a teaser for the upcoming Ali novel, Clawback, due out in March. I’ve also had complaints from people who, as late readers to a novella, were offended to find that the teaser involved was to a book they had already read. Here’s another thing to remember about publishing. Hardbacks come out before paperbacks. Always.

I’ve been busy doing editorial work on Clawback this week which is why the No Honor on-sale date caught me completely flat footed.

I’ll try to do better next time.

P.S. Obviously e-books can’t be autographed.  That’s why I have bookmarks.  Please send an SASE (business-sized, #10,) to me at:

And for some of you who are still awaiting Dance of the Bones bookmarks?  I ran out temporarily, but they are coming.  I promise.