And so it is with life on the road.

What shows on the public schedule of a book tour isn’t the whole story by any means. There’s also a good deal of drama behind the scenes. Usually purses go astray later on in the tour when weariness sets in full bore. This time it happened early on—day three, in fact. The schedule said I was to go to the Puyallup Public Library and leave from there to go to Sea-Tac for an afternoon flight to Spokane. Bill, the elder, drove for the first two and a half days of the tour. The drive to Puyallup from our house in Bellevue took a full hour, and we could see that the trip from the library to the airport would take another one. There was enough time to make it, but only just.

When I got out of the car at the library, I retrieved the Yellow Bag from the back seat. On tour it is the designated carrying place for the computer, iPad, all attendant cords, extra tissues, and a supply of bookmarks. Then I went looking for my purse. It holds my supply of red pens, government ID, credit cards, makeup, and a few other book tour essentials. The problem is, the purse wasn’t there. I soon realized it was still back home in Bellevue. Panic ensued. There wasn’t enough time for Bill to go back to the house—a two hour round trip—and still get me to the airport on time, so we called a friend and prevailed on her to bring the blasted purse! (Thank you, Aunt Alice!) Fortunately the library had a suitable pen on hand, but I confess I was a wreck by then, and the first few books I signed were done with a rather shaky hand. By the time I came home from Spokane late that night and before we headed out again the next morning, Bill had created a handy, dandy check list.

If you’ve looked at the schedule, you may have wondered about my bopping back and forth across Puget Sound several times in the course of two days. Here’s the thing. The people who create book tours mostly live in New York. When they see inches on maps, they tend to give them the same value as inches on maps in say Connecticut or Vermont. When it comes to Washington and Oregon? There’s an immense disconnect in the relative distances reflected in map inches. Google Maps may give them a suggested driving time, but those suggestions don’t necessarily take into consideration Seattle’s dreadful traffic tie ups or what might happen when you need to get to Port Angeles in a hurry and the Hood Canal Bridge is closed. (That alone entailed a four hour detour.)

Getting to the far flung events in Washington and Oregon may have been challenging at times but those stops were immensely gratifying. I’ve learned over the years that in cities where author appearances are a dime a dozen, most people shrug their shoulders and say who cares? That’s why I go to the hinterlands. Why go to a library in Seattle proper where ten or twenty people might turn up when I can go to Puyallup or Covington or Poulsbo or Port Angeles and play to a packed house of a couple hundred or so? The Bing Theater in Spokane? Great! Ditto for the Fox Theater in Centralia!I And Ditto for the Coaster Theater in Cannon Beach! The audience enthusiasm in those places was terrific. 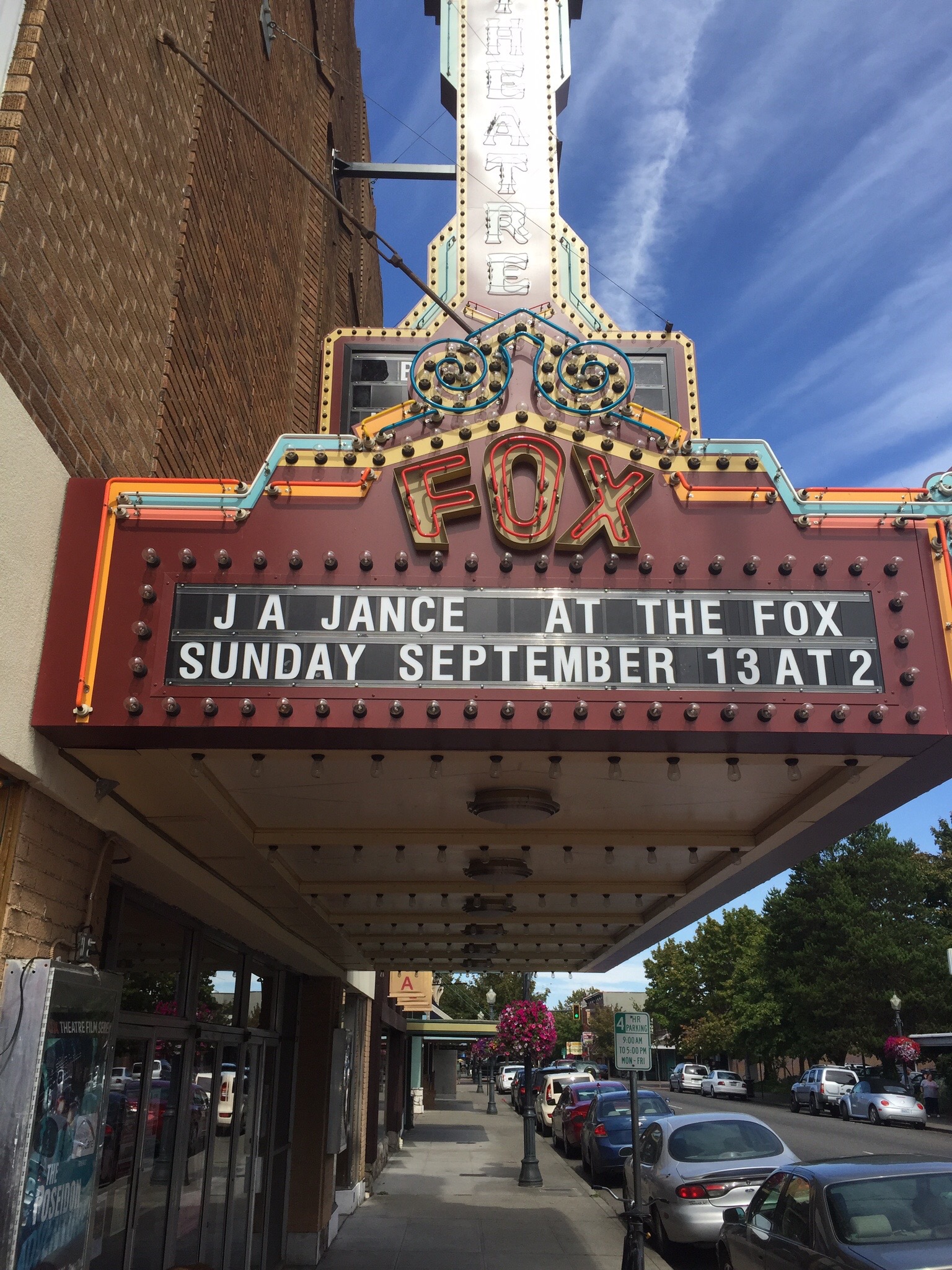 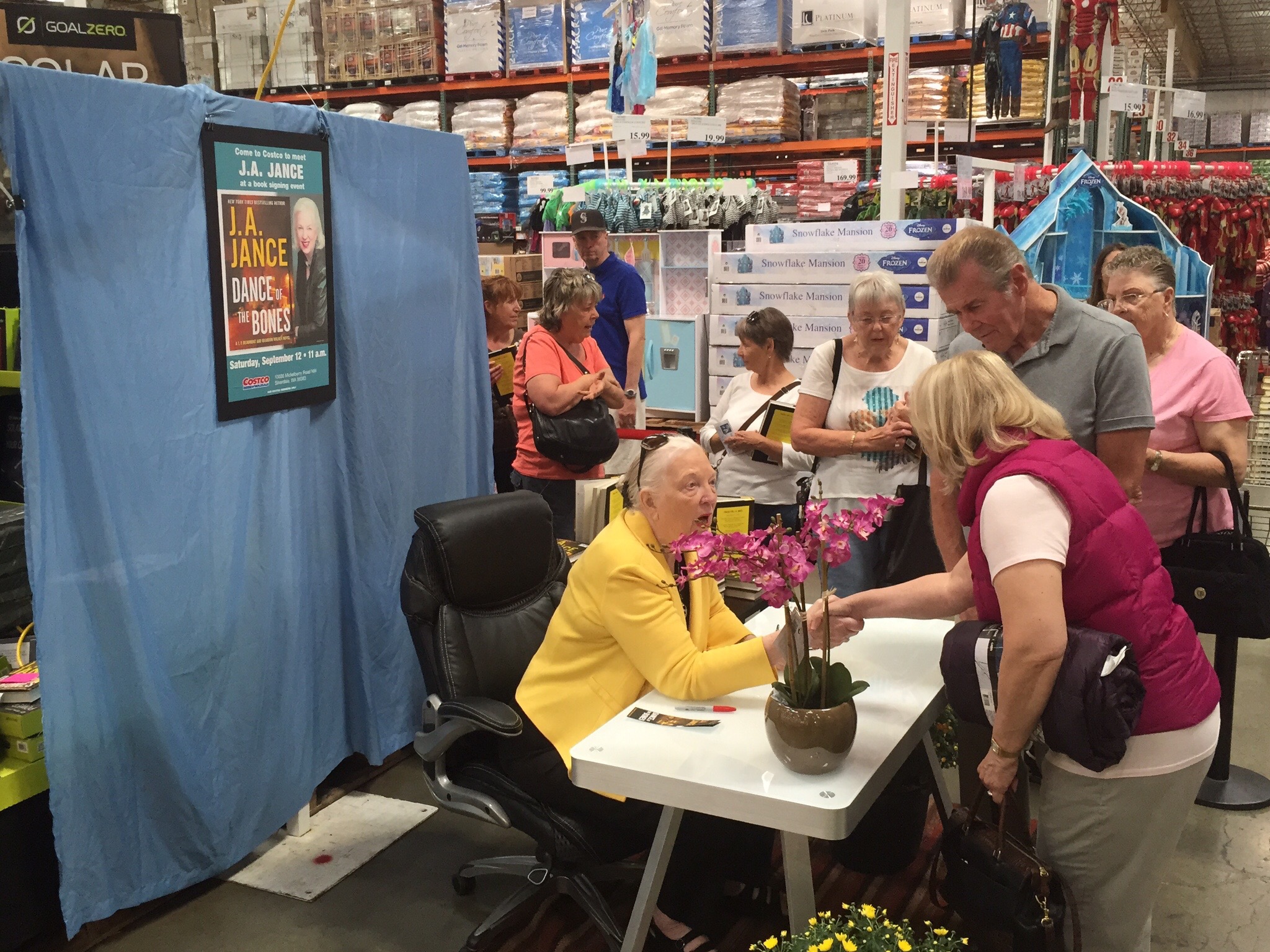 I had asked publicity to book an appearance in Corvallis, Oregon. When the printed schedule finally hit my hands, Corvallis was a no-show. In place of Corvallis, there was something listed as the Monroe Community Library in Monroe, Oregon. Excuse me? Where? When I tried Googling it, Google Maps helpfully sent me to Monroe, Washington. When I finally did find Monroe, Oregon, I could barely believe it. I called publicity and asked, “Are you sure about this?” “Absolutely,” they said. “They’re very enthusiastic.” Really? Are you sure?

Late Monday morning, we left the hotel in Portland and headed for Monroe. We drove as far as Corvallis and turned left. And then we drove some more. A lot more. On a nearly deserted two lane road past farm sheds and fields. By then we were so far out in the country that cows in pastures looked up to see what was going on as we passed by. The farther we went, the more I worried. My son, Bill J., is driving Miss Daisy on this tour. When we hit the Monroe city limits and saw the sign, “Population 608!!, I hit the roof and cut loose with a very ungrandmotherly version of “Please, Mr. Custer, what am I doin’ here?” Fortunately, there were no “little ears” present at the time.

We turned into the library where someone had dutifully reserved a parking place for us, but from the number of cars I could see on the street, reserved parking seemed entirely unnecessary. A cheerful librarian came to lead us inside. I did my best to smile back at her, but it wasn’t easy. She took us to the room where the booksellers were busily unpacking the books as well as to the next room over where seventy-five or so chairs had been set up facing a lectern. They had a mic. They had a sound system. So far so good. That is the point where I turned to look outside and was utterly astonished!!

Do you remember that old Star-trek episode where the Starship Enterprise lands on an overpopulated planet. When they open the shades, there are hordes of people standing outside staring in at them? That was me in Monroe, Oregon. The front deck area was full of people waiting impatiently to get inside.

To give the booksellers a chance to finish setting up, I went outside and did a “shout it out” Q and A on the front deck. When the doors finally did open and people stormed inside, the booksellers were completely overwhelmed. The seats were gone in a blink and, as it turned out, so were the books. Bill J. had to be dispatched to the Costco in Eugene (40 miles roundtrip) to buy more.

By then I could see we were in big trouble. There weren’t going to be nearly enough seats to go around, and that’s when I made the executive decision to move the show outside. The people who had chairs brought them. One woman went to the car and returned with her own private beach chair. People sat on walls and on the grass while the librarians hurriedly moved the sound system outdoors, too.

In the melee, one of my fans, took a tumble on the concrete stairs, hit her head, and eventually had to be carted off in an ambulance. (If anyone can let me know how Gwen from Albany is doing, I’d really appreciate it.) At that point it was fortunate we’d already moved the show outside because the Fire Marshal showed up with the EMTs. He would have shut us down for sure if we’d still had all those people, and estimated crowd of 275 to 300, inside!

Even with all of that, the program scheduled to start at 1:30 started only five minutes late at 1:35. The show lasted for an hour and forty-five minutes. I was determined to talk long enough for Bill to get back with the books. (I didn’t want anyone who wanted a book to leave without having a chance to buy one!)

I’ll be thinking fondly of Monroe, Oregon, for a very LONG time! 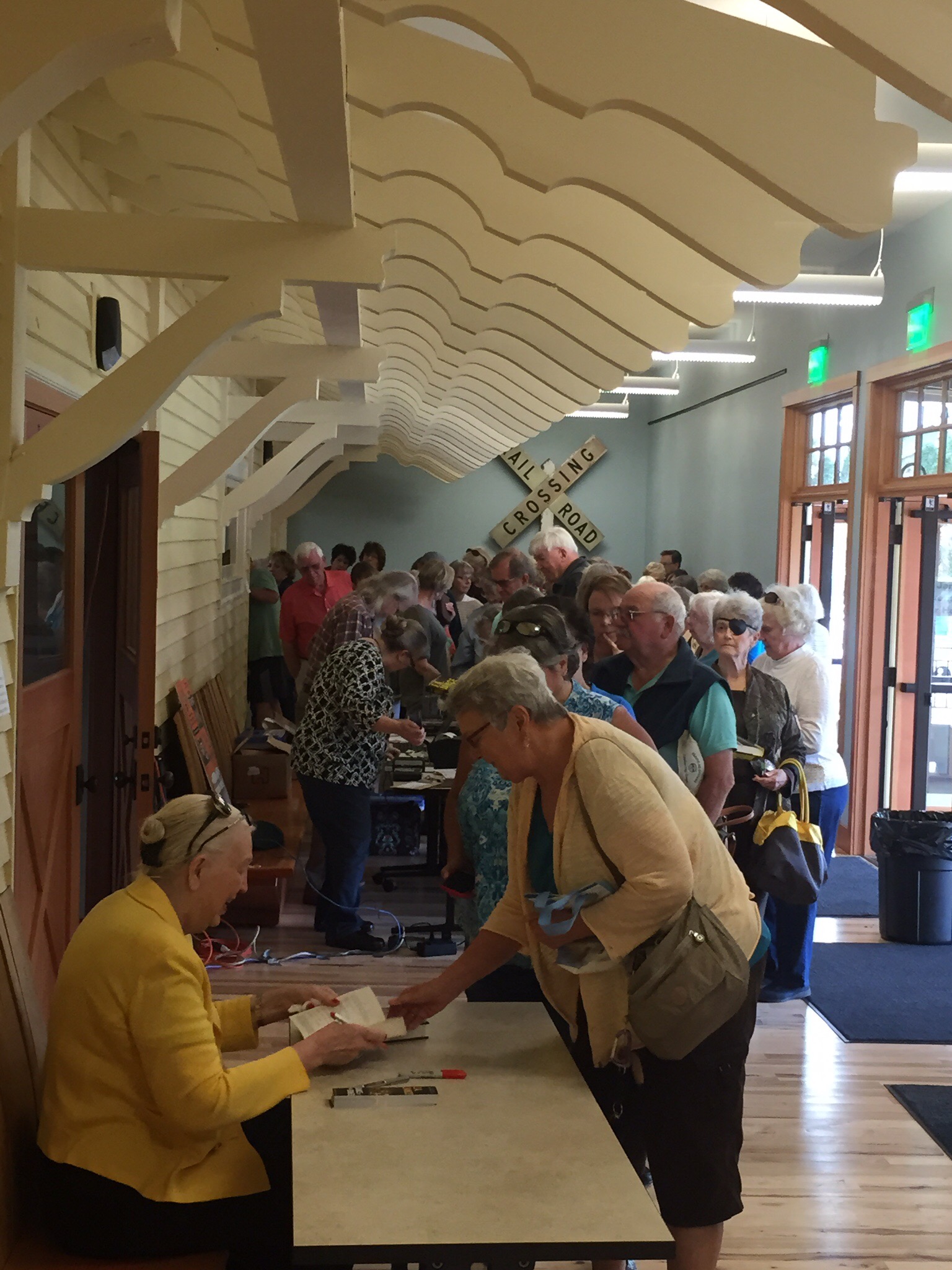 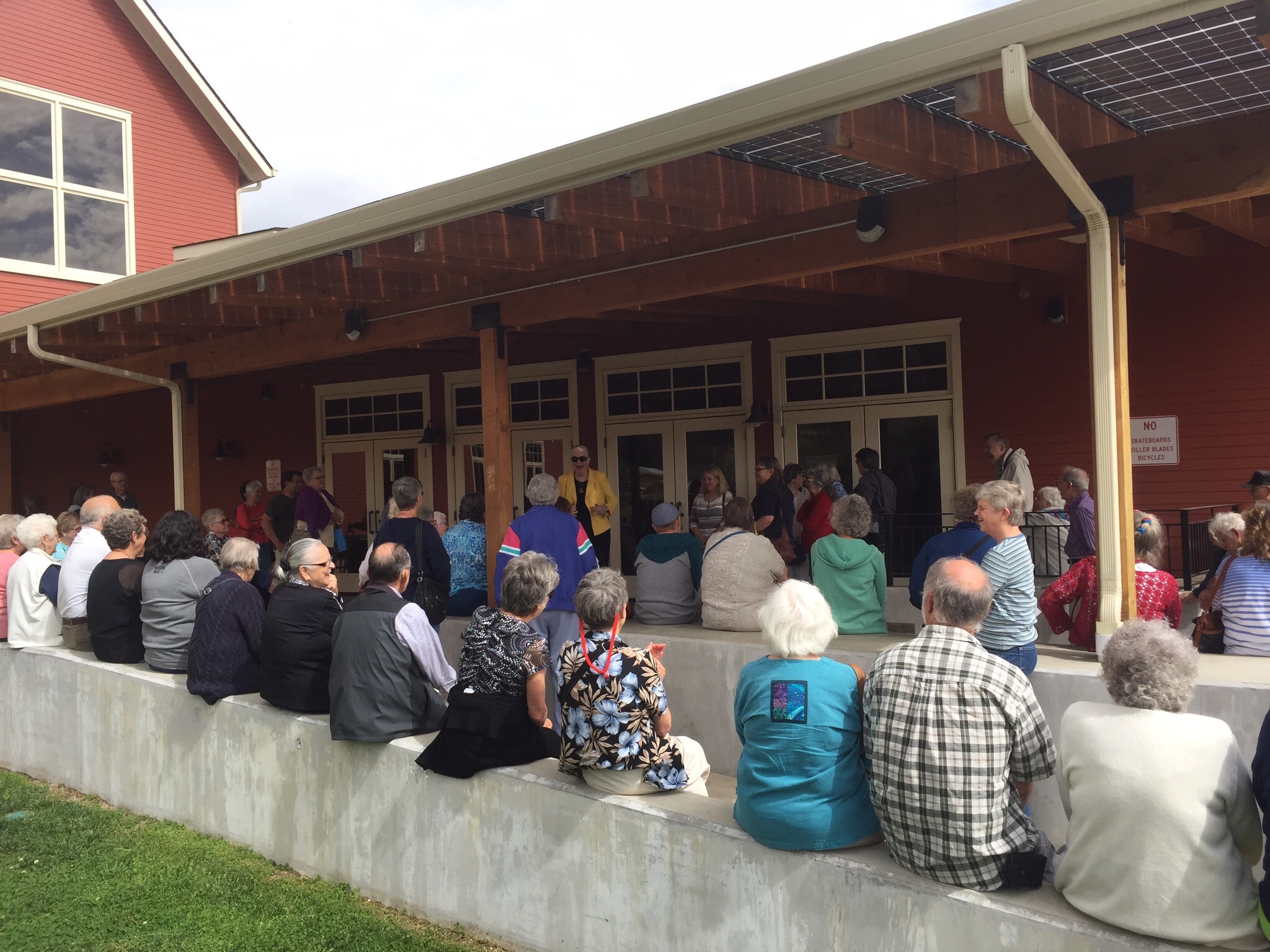 Eventually, when the last book was signed, we headed back to Portland. By the time we got to the hotel, I was a rag. I walked around the Riverplace block (1000 steps per lap, by the way) long enough to finish my 10,000 steps for the day. Then, after changing clothes in my room, I decided to go downstairs for dinner. My menu choices are a little limited at this point and nothing in The Third Degree appealed, so I walked as far as McCormick and Schmick’s at the far end on the block. Halfway through my Caesar salad, I realized that when I left my room to go downstairs to have dinner, I hadn’t bothered bringing my purse along. It was humiliating to have to run up the flag to Bill J. He had to be let into my room so he could bring my credit card. Otherwise I would have had to pay for my dinner by washing dishes. (Note to self: Next time ask for two room keys at registration!)

That was Monday. Tuesday started with a 3:45 AM wakeup call. From 4:00 AM until 10:45 AM I did what’s called a “Radio Tour” doing one telephone interview after another for more than six hours with radio stations on the East Coast. Then we drove two hours to Cannon Beach, did an enthusiastically received event at the Coaster Theatre, and drove back to Portland. Yesterday’s steps came to a paltry 4800.

Today, as I’m writing this, we’re on board an Alaska Air flight headed for Phoenix. Late this afternoon we should receive a phone call from my editor telling us whether or not DOTB made the bestseller   list. No matter which way it goes, I can tell you that the Pacific Northwest leg of the tour has been gratifying and exhilarating, to say nothing of exhausting.

On to Arizona! Since I’m a Wildcat, I’ll go ahead and say “Bear Down.” That’s good advice for athletes on the football field and on the basketball court, and it’s equally good advice for seventy-something authors on book tours.

Now where on earth did I put that check list?

PS: I just heard from my editor. Dance of the Bones will debut at # 15 on the NYTimes hardback list and at # 12 on the e-book list. Thank you all.