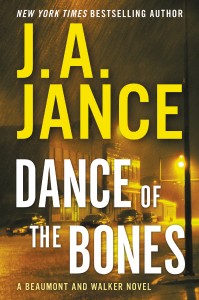 Dance of the Bones goes on sale Tuesday, September 8, the day after Labor Day. For some of you, this will be the first Walker book you’ve ever read. (I hope it won’t be the last!)

The first of this series, Hour of the Hunter, was my first non-Beaumont book. When it came out, many dyed-in-the wool Beaumont fans were less than thrilled and more than a few wrote to let me know they were displeased. I turned some of those folks around by explaining how a former professor of Creative Writing from the University of Arizona ended up being the crazed killer in that book.  It’s a good story. Those of you who are regular readers of my blog have probably already heard it, so I won’t repeat that oft-told tale here.

The point is, if you’re a Walker newbie or a Walker oldie, you’ll be entering the world of the Tohono O’odham, the Desert People, who have lived in the desert west of what they called Chuk Shon (Tucson) for thousands of years. You’ll also meet a cast of T.O. characters stretching from the 1880s to the present—Understanding Woman, Rita Antone, Looks at Nothing, Fat Crack Ortiz, Lani Walker, and Dan Pardee—as well as Understanding Woman’s great, great, great grandson, a surly teenager named Gabe Ortiz.   Many of those characters have been dead for decades at the time this book takes place, but you’ll find that their wit, wisdom, and stories live on.

By now you’re probably thinking, is she nuts? I thought this was supposed to be a murder mystery, and isn’t J.P. Beaumont supposed to be in this book? It is, and he is. Beau and Brandon Walker team up to solve two far flung and long cold homicides, even though Beau is as much a stranger to all these folks as new readers will be. But you know what? I’m not worried about that.

In 1970 I went to Sells, Arizona, for the first time as the newly hired librarian at Indian Oasis School. The road through the reservation from our house was mostly flat desert, but just before entering Sells, the road crosses series of hills through a low-lying pass.  As I drove down into town that day and smelled wood smoke from cooking fires lingering in the air, I felt like a complete outsider, but over the next five years, that changed. Melissa Juan, Pauline Hendricks, Rita Pablo, and Loretta Ramon took me in and made me part of their circle—a circle I still treasure to this day.

And that’s my purpose in writing these books. Yes, I want to tell a story. In the earlier books, you see how Diana Ladd and Brandon Walker are brought into the T.O. circle, and I’m confident J.P. Beaumont and my readers will be welcomed in the same way.

If you come to one of the Dance of the Bones events, you’ll no doubt hear some of my reservation “circle” stories. I will not, however, be telling any of the T.O. legends that appear in the backgrounds of all the Walker books. Those are considered ‘winter-telling tales’ and can only be told between the middle of November and the middle of March.  Since DOTB is a September book, telling those stories is off-limits.

The schedule is up on my website, www.jajance.com.  Go to the map and click on your state for detailed information about appearances. And if you want to read more about the Walker Series, just read about it on my website too.  See you on the road.