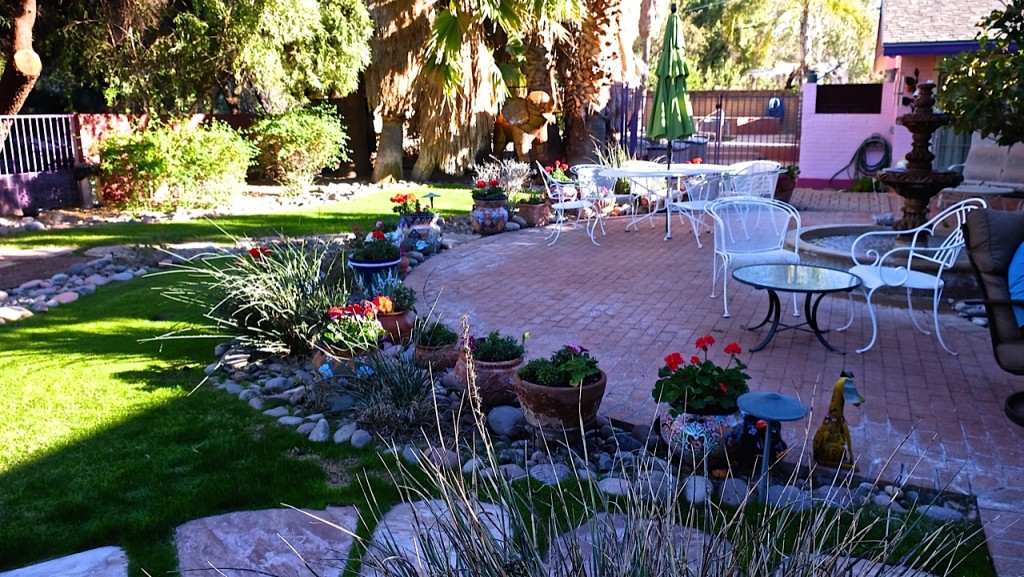 We have color now!

I’ve always been a sucker for yard art. It started simply enough with a few plastic flamingos when our daughter created a Relay for Life team in honor of her husband, Jon, who was battling melanoma. The team was called the Cancer Fighting Flamingos. Our daughter’s goal was to raise $70,000 dollars in seven years, and with the help of lot of people, including many of the people who I count as fans and who are reading this blog right now, the CFFs won through.

Those few flamingos, I believe, were the initial source of my yard art infection. 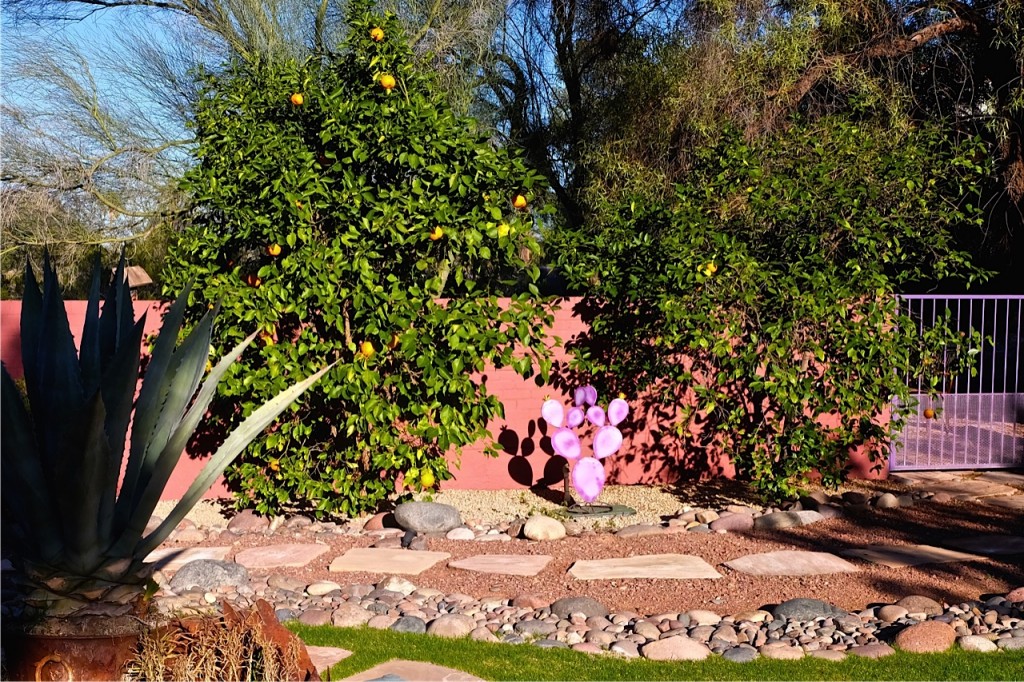 When we first bought our place in Tucson, there was nothing green here.  Nothing.  Not even flowers.  I’m a big one for instant gratification, so one day, at a local nursery—I’m nothing if not a HOPEFUL gardener—I saw a brightly painted six foot tall iron iris and realized that was something that would add a spot of instant color to the barren northeast corner of our desolate back yard. The iris came home in the guise of that year’s Mother’s Day present. (Metal flowers last longer than real ones do.) Unfortunately the brightly colored paint all melted away after years out in Tucson’s unrelenting sun. Having a rusty iron iris in the corner of the yard in Arizona was utterly depressing, so we took it up to Washington where, two Mother’s Days ago, Bill and my son Tom repainted it. It’s now standing in blue, yellow, and green splendor on the patio in Bellevue. 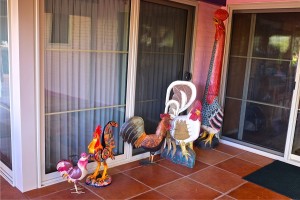 The start of my addiction, a very tall chicken in the corner

A year or two passed. We remodeled the house here. Suddenly we had a back patio made of smooth red tile. There was one particular spot, an empty step leading nowhere where a door used to be, was just crying for . . . well . . . a chicken. I have no idea why a chicken needed to be there, but it did. So one day, I told Bill, “I’m taking the mini-van and going in search of a chicken.” I was gone for several hours, six or so. When I came home, Bill said, “Did you find a chicken?”  “Yes, I did,” I told him, “but you’ll need to come help unload it. In the accompanying photos, you’ll see that first very tall chicken—a wooden one standing next to the door frame on the back patio. That makes him several inches taller than I am, and he was the real start of my yard art obsession which, often as not, includes birds. 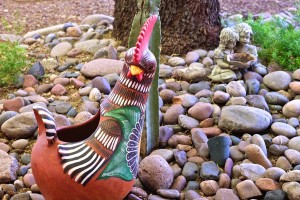 One of the flock of chickens.

I have several chickens now—a flock here in Tucson and another one in Bellevue. One of the Bellevue flock, an incredibly lovely French porcelain one, came to grief this winter. I had him sitting out on the porch. The paint cracked, water got under the paint, and then it froze. Colorful pieces of paint fell off, leaving a pile of debris that was very reminiscent of fallen feathers. Too bad. I’m afraid that plucked rooster has gone away for good now, but the other members of the flocks remain—three metal ones, another pretty porcelain one, a concrete one, two wooden models, two clay ones, and my newest edition—one made of Mexican tile.  All of them are roosters, by the way, so no eggs get laid. I also have an owl balanced on a weather vane and a metal heron who was absolutely useless when it came to chasing away the real one. (That, of course, is another story all together.) Let’s just say it’s clear I’ve gone to the birds. 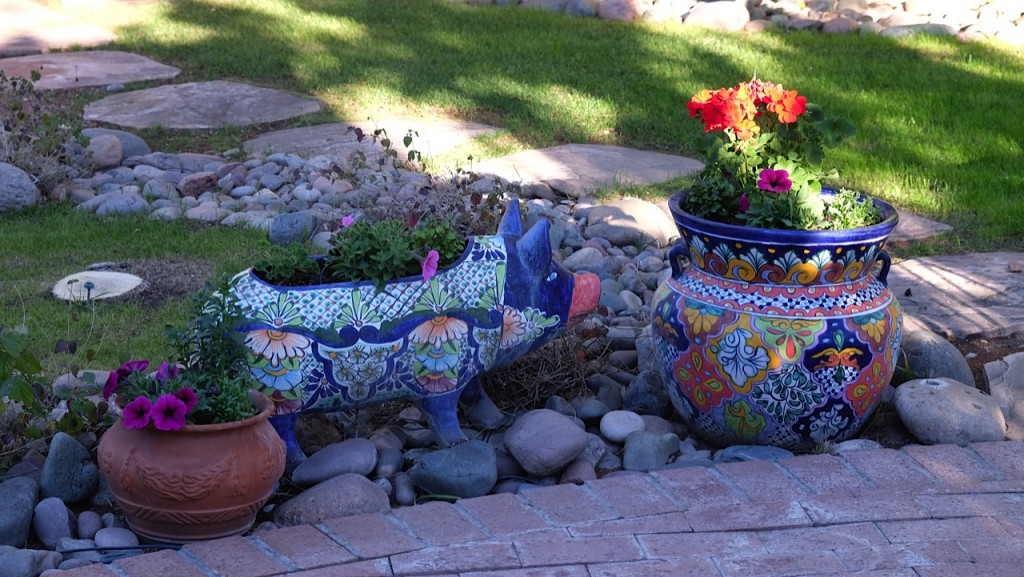 Part of the remodeling process in Tucson included fixing the irrigation, so now we have pots lining the patio—pots that are currently filled with happy and thriving petunias, geraniums, and snapdragons. One of the pots happens to be a pig and another a little bull.  And there are various little metal creatures scattered here and there among them—including a wiener dog that bears only the slightest resemblance to Bella. 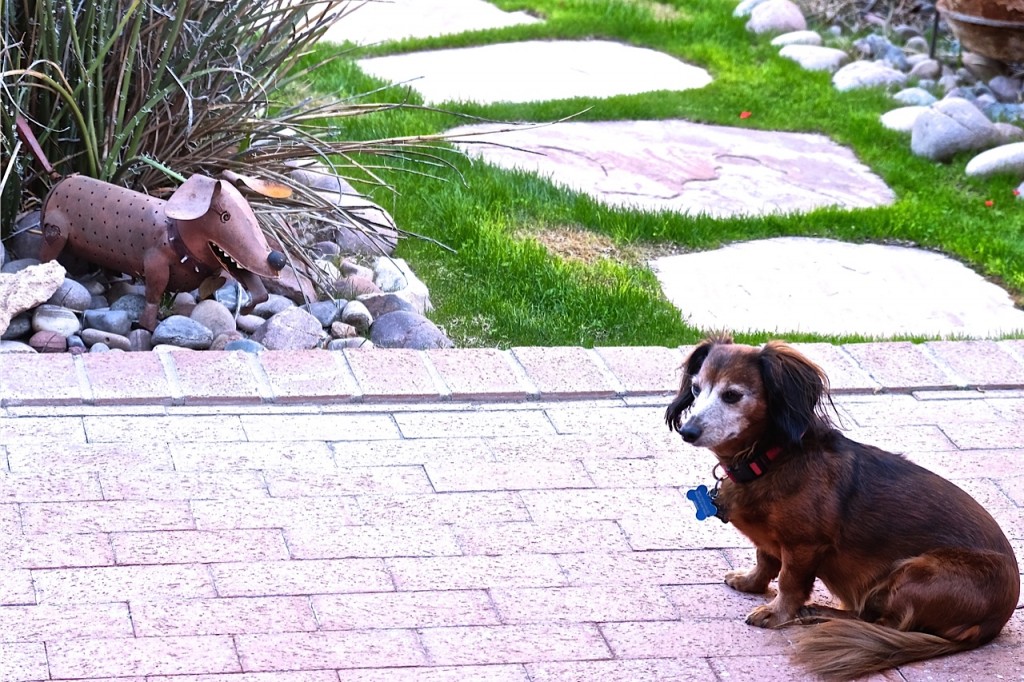 Bella and her look alike!

One of the things I can tell you is that Valentine’s Day always comes as a huge surprise to Bill.  Yes, it’s on February 14th every single year, but although he sees it coming, talks about it, and worries about it, when the day arrives, he’s never really ready.  This year I decided that, rather than giving him hints, I’d give him some actual help.  A few weeks ago when we went shopping for new flower pots, we saw two extra items—the brand new tile chicken and a flock of new metal flowers to replace the now absent iris, four short pieces and two tall ones—a permanent bouquet rather than a temporary one.  I wasn’t driving the mini van the day I went to pick them out, and a mini van was needed so we went back the next day for the tall ones and also for that pesky tile rooster that was calling to me from the other side of town. 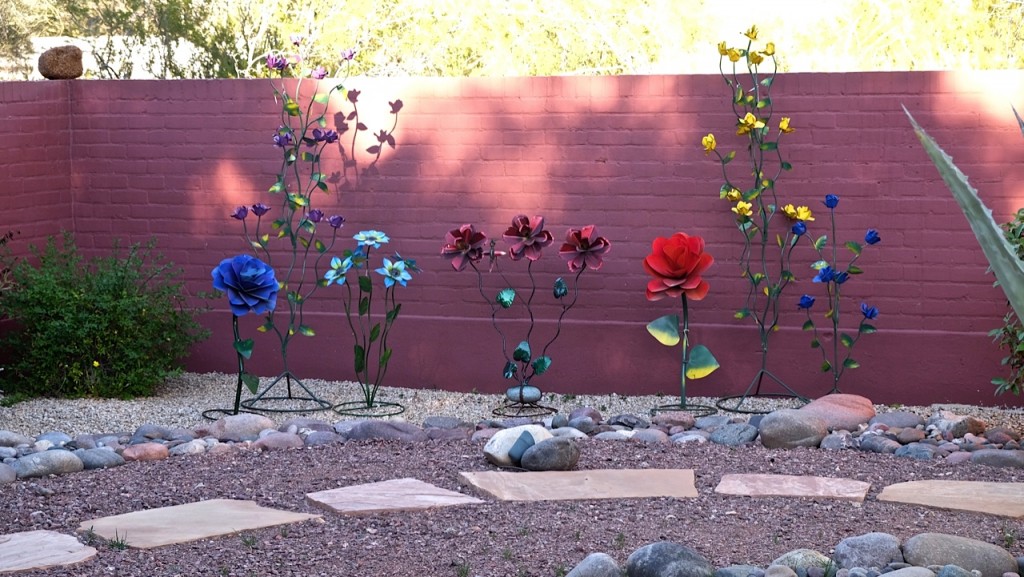 Bill had told me in advance that if anything else really spoke to me, there was still some room in his Valentine’s Day budget. Give the girl and inch, and she thinks she’s a ruler. I knew there were metal horses there, and I’m always looking for something for that bare back corner, now that the iris is gone. I thought one of those rearing metal horses would fill the bill—until I saw well . . . the bill. The tall horse was WAY more than the Valentine’s budget. The shorter horse that would barely peek over the wall was also beyond my budget guidelines. And then, next to one of the shorter horses, I saw something else—an elephant with a small red tag attached to his tail. I thought the red tag meant the elephant was already sold. What it really meant is that the elephant was ON SALE!!! for a third of the price as that very expensive taller horse.So the elephant came home. I didn’t bring him in the minivan—he had to be delivered. But he lives in the back yard now, dashing out from among a grove of palm trees. Wait, are you saying you missed the elephant in that first photo?  Maybe you’d better take another, closer look. 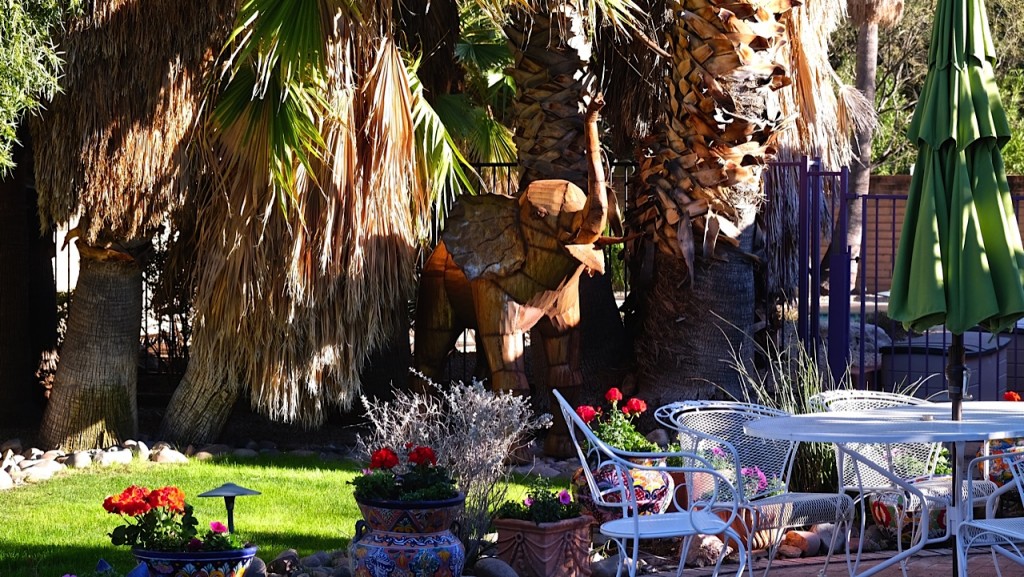 Yard art. From flamingos to elephants it is indeed an addiction—and a very happy addiction at that.

Happy Valentine’s Day, folks. And may all your bouquets, permanent or temporary, be beautiful.