A lot of the fun of going on vacation is anticipation. In this case, getting ready for our Scandinavian cruise, we had anticipated our First Class flight on British from Seattle to Copenhagen with an extra day at a downtown Copenhagen hotel to adjust to the time zone before boarding the Silver Whisper. That plan came to a screeching halt on Wednesday when the dismaying words “Flight Cancelled” were broadcast in the SeaTac airport lounge. We spent the next three and a half hours waiting in line to see if we could get re-bookedon another airline. While in line, I managed to cobble together an itinerary that would have had us back at the airport at six the next morning to fly to San Francisco to catch another flight, first to Paris and finally to London.

I had that reservation nailed down by the time we finally reached the head of the line at the airport. There the wonderful ticket agent, who also happened to be a fan, managed to find us business tickets on Delta on a flight leaving for Amsterdam the next afternoon at a much more civilized hour–1:30. So at ten o’clock at night, rather than dining in style on British, we were back home in Bellevue eating peanut butter sandwiches. The only member of the household who was happy about that was Bella! 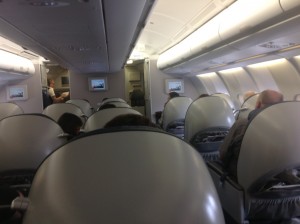 Finally on the flight!

The flight on Delta was fine with only one small hitch–a short (less than an hour) connection in Amsterdam. Because we landed at the end of a very long trans-Atlantic concourse and needed to go to the end of another international concourse, it was a LONG indoor hike with every other moving sidewalk not moving. It also included clearing both customs and security. Again! We made it but only with five minutes to spare before boarding began.

During our packing process, I had lobbied for having one roll-aboard carryon. Bill insisted that having each of us carry one small bag wouldn’t be a problem, but he was wrong. After standing for four hours the day before and sleeping on a not-exactly flat business class bed, by the time we made it to Amsterdam, his back was a wreck. I ended up carrying both small bags. Don’t ask me about my shoulder. And, yes, once we got to Copenhagen, at his suggestion we BOUGHT a small roll-aboard bag before we ever left the airport.

I may have mentioned this before, but for years my mother had a sign on her refrigerator that said: If at first you don’t succeed, do it the way your wife told you! Enough said about that!!

Once we landed in Copenhagen, we went directly to the cruise ship without a day’s grace for time zones. By the time we got there, they were already boarding. If we had missed that connecting flight in Amsterdam, we would have missed the boat. Literally.. 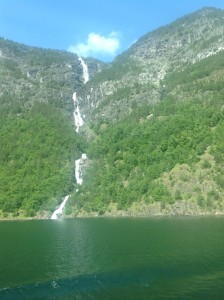 Fjords are our choice for transportation!

So here we are, and it’s been wonderful. We’ve sailed past miles and miles of rock-bound cliffs with ribbons of icy water cascading down them. We’ve watched the full moon shining on dead-still water. We’ve watched sunsets that never quite ended before sunrises began. Right this now I’m watching cars making their way up and down a serpentine road that climbs up an almost perpendicular mountain. The food has been wonderful. The service has been terrific. The pace has been just what we needed–time apart.

The other night at dinner in La Champagne, the French dining room, we sat there holding hands and being grateful for the blessing of simply being together. Bill’s back had improved some by then, but our bodies were still telling both of us that we’re not as young as we once were. At the end of dinner, our waiter serenaded us with a song neither of us had ever heard before: I want to grow old with you. By the end of the song, we were both in tears because it’s what we both want and it’s what we’re both doing–growing old together.

It doesn’t get any better than that.