This week it has become clear to me that my fan base is divided into several very different parts. There are the people who do Facebook; the ones who visit the website; the ones who only read the blog on one of the various sites; some who are Twitter followers; and the few–the lucky few–who do all of the above. This week we sent out a new book announcement, but since it only went out to my e-mail list, some of you may have missed it.

But first an aside. That’s the wonder of writing a blog. I get to do asides with wild abandon.

For years, one of my favorite British comedies on television was ‘Allo, ‘Allo set in occupied France during World War II. The occupation of France certainly wasn’t funny, but the series was. It took place in Café René. The unlikely hero of the piece as well as the owner of the restaurant was a rounder named René who was always chasing after the good looking young women who made up his wait staff. The establishment was held together by his hardworking, long-suffering wife, an aging chanteuse, who would periodically warble an off-key song or two to entertain the customers. René’s mother-in-law, a bedridden old battle-axe, ruled the roost from her upstairs bedroom. Stowed under her bed was an illegal radio with which they communicated with the allies. A fair number of rescued British fliers often hid out under the mother-in-law’s bed as well.

At least once in every episode, a young woman wearing a trench coat, a leader of the Resistance, would show up to give the characters their marching orders. Each time she appeared, she would preface her remarks by saying, “Listen very carefully. I will say this only once.”

In this instance, and in case you are someone who is already on the mailing list or on Facebook, I will be saying it twice because this will be something you’ve already seen. And since I wrote the new book announcement to the best of my ability the first time, I’m not going to rewrite it. After all, what I’m really supposed to be working on this afternoon is Joanna Brady # 16. Yes, yes. I have started the next Joanna. Just don’t ask me for a title. I have NO idea.

Last year, after I finished writing Beaumont #21, Second Watch, and before I started writing Ali # 9, Moving Target, my HarperCollins editor asked me if I would write a novella featuring J.P. to go on sale prior to Second Watch.

For those who are curious about the difference between a short story, a novella and a novel, here’s a literary rule of thumb:

My readers may find this difficult to believe, but my mind generally runs in a linear kind of way. Since I was writing Ring in the Dead AFTER I wrote Second Watch, the action in the novella takes place AFTER the action Second Watch. The problem with that is that Ring comes out first and Second comes out later. That means I’m forcing my readers to do a bit of literary time traveling (Is there any other kind?) since when they’re reading Ring, they will encounter characters and events in the past tense that they won’t meet or read about until September when Second Watch is released. 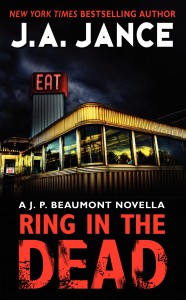 Ring in the Dead, a J.P. Beaumont novella

Got it? That means when you meet, Milton “Pickles” Gurkey, Beau’s first homicide partner in Ring, don’t scratch your head and say, “I must be missing one book. I don’t remember reading about that guy before.” Trust me, you’re not and you will. Some people have decided they’re not into time travel. They’ve decided to BUY Ring in the Dead and then not actually READ it until after they read Second Watch. If that’s what floats your boat? More power to you.

And for those of you who want autographed bookmarks? You know the drill. Please send a business size SASE to me at P.O. Box 766, Bellevue, WA 98009. (The business size part is important because otherwise I have to fold the bookmarks or cut them in half!) Since we will be out of the country for a good part of July, don’t expect an instant turn-around on bookmarks.

This is the first time I’ve published a stand-alone novella, so this is all a bit new for us. If your usual bookstore doesn’t stock this item, encourage them to order it. Otherwise, feel free to contact the Seattle Mystery Bookshop because they will have copies available for me to sign once I return from our Scandinavian cruise. Their address is: staff@seattlemystery.com