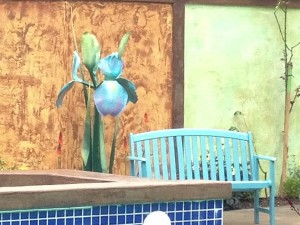 Growing up in Bisbee, there were no school buses for kids who lived in town. As a grade school kid, I walked from our home on Yuma Trail to Greenway school, a trek that took me down one steep hill and up and over two more on a street called Cole Avenue. The first hill we called Morris’s Hill because you walked beside one of Bisbee’s several mansion type residences. That particular one belonged to the family of Carl Morris, the guy who owned Bisbee’s KSUN radio station. (KSUN was long on Gentleman Jim Reeves and Patsy Cline and very short on Mozart.)

The Morris’s had a gardener. Once free access to Bisbee’s mine water went away, the Morris family, along with their other well-heeled Vista neighbors, could still afford to water their lawns and gardens. That meant that, for a desert rat kid, there were several wonders growing in the Morris’s yard. Every spring a clump of bright red tulips would pop up in the far right hand corner of their lot, the one nearest the street. I blush to disclose that I pilfered one of those occasionally. I confess to taking a pomegranate or two from the tree that was just inside their fence and had fruit that hung outside it and OVER the by then wilted clump of tulips. I tried planting tulips when we were living on the reservation, but none of them ever survived. Never even attempted a pomegranate.

In Bisbee, we attended the Warren Community Church. The house across the street from the church, located on the Vista, belonged to the local optometrist, Dr. Roberts. (The seven near-sighted Busk kids helped pay a substantial amount of Doc Robert’s mortgage year after year.) In his off hours, Dr. Roberts cultivated a garden that bloomed profusely with multicolored dahlias, bouquets of which often graced the church’s altar. I have always loved dahlias, but when I planted some in the courtyard at our previous Bellevue house, they immediately developed some kind of fungus and never did grow very well. We also planted cherry tomatoes in our courtyard there. We never got to eat any of them, though, because Tesla, one of our first pair of golden retrievers, loved cherry tomatoes, too, and ate them the moment they ripened.

The view out our back door.

When it came time for high school in Bisbee, there was still no school bus service for in-town kids, so when the “new” but now more than fifty-year old high school opened in Bisbee and before I got my driver’s license, it was time to walk again. I don’t know the exact distance, a mile and a half or maybe two. Walking there from home took me past a different section of the Vista, the one where the older of the two Moore families lived. In the spring the front porch next to the street dripped with the lovely lavender blooms on an ancient wisteria. I’ve recreated a fictional version of that tree on the front porch of Ali Reynolds’s house in Sedona. I’ve always loved wisteria, but until two years ago, I never had any.

At the new Bisbee high school, there was a custodian named Charlie. I don’t remember his name, and I never remember speaking to him. He had cerebral palsy, so communicating with him wasn’t easy, but what he did for Bisbee High School was lovingly plant and care for a beautiful rose garden in front of the school just under the flagpole. Fifty years later, both Charlie and his wonderful roses are long gone, but the memory lingers on.

My first husband and I lived briefly in Pe Ell, Washington, in the mid-seventies. Outside our back door was a lush clump of rhubarb that, like the Morris’s tulips, came up magically every year, rain or shine. (This was Washington state. Near the coast. Trust me, it was mostly rain!) With the help of a neighbor, Sophie, I learned to make rhubarb pies. Until two years ago, I never succeeded in growing any more rhubarb of my own, now I have some growing just off the back patio. I’ll probably harvest most of it this week to bake pies to serve for not one but two company dinners coming up this weekend. And we’ll be spicing our food with rosemary, thyme, mint, basil, leeks, and chives growing in our raised bed gardens.

So why am writing all this? Because this morning, a photographer from the Seattle Times is here, spending the better part of three hours taking pictures of our yard and gardens. I’m hoping there will be a photo of the view from my outdoor writing chair to accompany this blog.

The people who are long-time readers of these journals may recall that we redid the yard and, with the help of Alan Burke, created a literary garden out of it two years ago, dropping pieces of C. Day-Lewis’s wonderful poem, Baucis and Philemon, into various places in the landscaping. During the summer of construction–and it did take most of one summer–our grandson, Colt, looked at the equipment and the piles of rocks in the yard and said, “Grandma, are you just going to have rocks in your garden?”

Well, no, and now that it’s two years later, the plantings have all filled in and are mostly thriving. (No wonder we have moles!) An article about the garden by Valerie Easton accompanied by Michael Siegel’s photographs should be featured in the Seattle Times’s Pacific NW Magazine sometime in late August or early September.

Given my checkered past with all things green, there is more than a little irony involved in all this. That means that I’m sitting here smiling today, smelling the roses, and enjoying every bit of it.

4 thoughts on “Stopping to Smell the Flowers”