I’m writing this on Monday morning rather than Wednesday when I usually do because it seems as though a lifetime has passed since I wrote my last blog, a cheery little missive saying that Christmas is almost upon us—Hi-HO.  And then, not four hours later, life changed.

Our dogs usually eat at 3 PM.  In a normal world, Jojo starts squeaking her obnoxious rubber chicken at 2:30 PM.  That’s her official dinner bell notice that it’s time for us to deliver food.

Last Wednesday that didn’t happen.  At 2:30 or so, she came over to the hassock and didn’t seem interested in using the doggie step stool, so Bill picked her up and she settled down next to him in his chair.  The next thing I knew, it was 4:05.  There hadn’t been a single squeak, but I served their dinner anyway.  When it was time for Jojo to leave the chair, her hind legs didn’t work.  I thought maybe they were just asleep.  After all, that happens to me from time to time, but things didn’t improve.  At ten to five I called our vet.  He said to take Jojo to an emergency pet hospital because, with this kind of thing there’s a twenty-four hour window when surgery might improve things.  That’s what the neurologist at the pet hospital said, too—a twenty-four hour window, and that Jojo would have a better chance of regaining some use of her legs if the surgery happened that night instead of waiting until morning.  After X-rays and an MRI, Jojo went into surgery around 10:30 PM and came out of the OR at 1:30 AM.  How do I know that?  I was still up waiting.  And worrying.  I called the hospital and spoke to the surgeon while she was still in the OR.

When Bella, our first long-haired doxie went down in the hindquarters, it was the weekend, of course, and we had no idea about that 24 hour window, so we lost Bella.  She was a rescue, pictured on the left below.  She was probably around fourteen when she crossed the Rainbow Bridge, but there’s no way to know that for sure.

On Wednesday night, we looked at what the estimated bill would be (back surgery for doxies is NOT covered by Medicare!), took a deep breath, and told each other, “It looks like this is what we’re getting for Christmas.”

On Thursday we waited and worried.  On Friday we waited and worried, trying to peer into the future and see how things would unfold.  On Saturday we went to pick her up.  Let’s just say that the young woman who handled our discharge interview has a good chance of being either a victim or perpetrator in one of my upcoming books.  She went over our list of medications, telling us that one prescription had been called into a previously unheard of pharmacy in Bellevue.  When I called to find out where they were located, the message said they were closed on weekends.  When I asked the young woman what we were supposed to do with a prescription called to a pharmacy that wasn’t open, she snarled at me saying she would not be “spoke to in that kind of condescending tone!”  I did not throw her through the window, but I was sorely tempted.  She addressed the rest of her monologue strictly to Bill before stalking out, never to be seen again.  I called our neighborhood Walgreens.  Yes, they had the medication in question, but the front desk told me that with the doctor not there on the weekend, her prescription couldn’t be recalled or sent to another pharmacy.  So at this point, 9 AM on Monday, that issue still isn’t fixed.

When they brought Jojo out, it was heartbreaking.  If she was glad to see us, it didn’t show.  It was like bringing home a helpless 15 pound newborn baby.  Wherever we put her, she stayed.  With no bladder control.  So that’s a problem.  There are techniques we’re supposed to be able to use to help her pee, but no one at the hospital actually showed us how to do it.  They just handed her over, and left us to figure it out.  We haven’t.  I can tell you we’ve used up mountains of towels and pee pads the past several days.

Jojo and Mary have slept on the bed with us from the beginning.  That wasn’t going to work, so on Saturday night I made a bed for Jojo in one corner of the room, tucked her in, and with an ache in my heart, went to bed.

People who follow my blog may remember the book tour where, due to a severe hearing loss I would have to have hotel security come wake me because I couldn’t hear the alarm on my cell phone.  Guess what?  At ten to six on Sunday morning, my mommy hearing app kicked in and I was awakened by the tiniest whimper from the corner of the room.  When I got to the bed, Jojo was still in the exact same corner and position where I had left her.

Once we brought her home, for the remainder of Saturday and all day Sunday, we fought the battle of Dachshund Locked Jaw, trying to get her meds down her throat.  It was not a pleasant experience for any of us.  We spent both days, lifting her out of soaked pee pads, cleaning her off, and putting her back down on new ones.  And all the while we felt more and more heartsick.

We watched Home and Garden TV for hours on end.  How many episodes of Love It or List It are there?  We watched football.  We watched all of Jack Ryan and Mrs. Maisel on Amazon TV.  We watched It’s a Wonderful Life, and like George and Mary did on VJ Day, we wept and prayed, and spent all day Sunday believing that this morning we’d go visit our vet and probably say goodbye to our Jojo.

I know that lots of people have been praying for our little ragamuffin double-dappled baby, and this morning those prayers were answered.  At ten to six, I was again awakened by a puppy whimper, but this time, when I got out of bed, where was she?  Right there beside the bed, asking to be picked up.  I’m sure she dragged herself over, but she got there.  And when I took her outside, she stood on her own for about 30 seconds.  Does that count as a miracle?  I think so, a medical miracle and a spiritual one as well.

Our big concern was that she had undergone surgery because of selfish guilt on our part.  And that’s probably true.  How could a four year-old dog who was fine at noon be on her way out by five PM?  The neural surgeon’s notes say she has a degenerative disease of the spine that plagues dachshunds.  If this situation recurs in the future, we won’t force here to undergo another surgery, but for now we’re grateful to have her for whatever time we have her.  Will we be investing in doggie diapers?  Maybe.  Probably.

Our house has steps inside and out.  It’s not exactly built to accommodate a paraplegic puppy, but we’ll cope.  We’ll adjust. 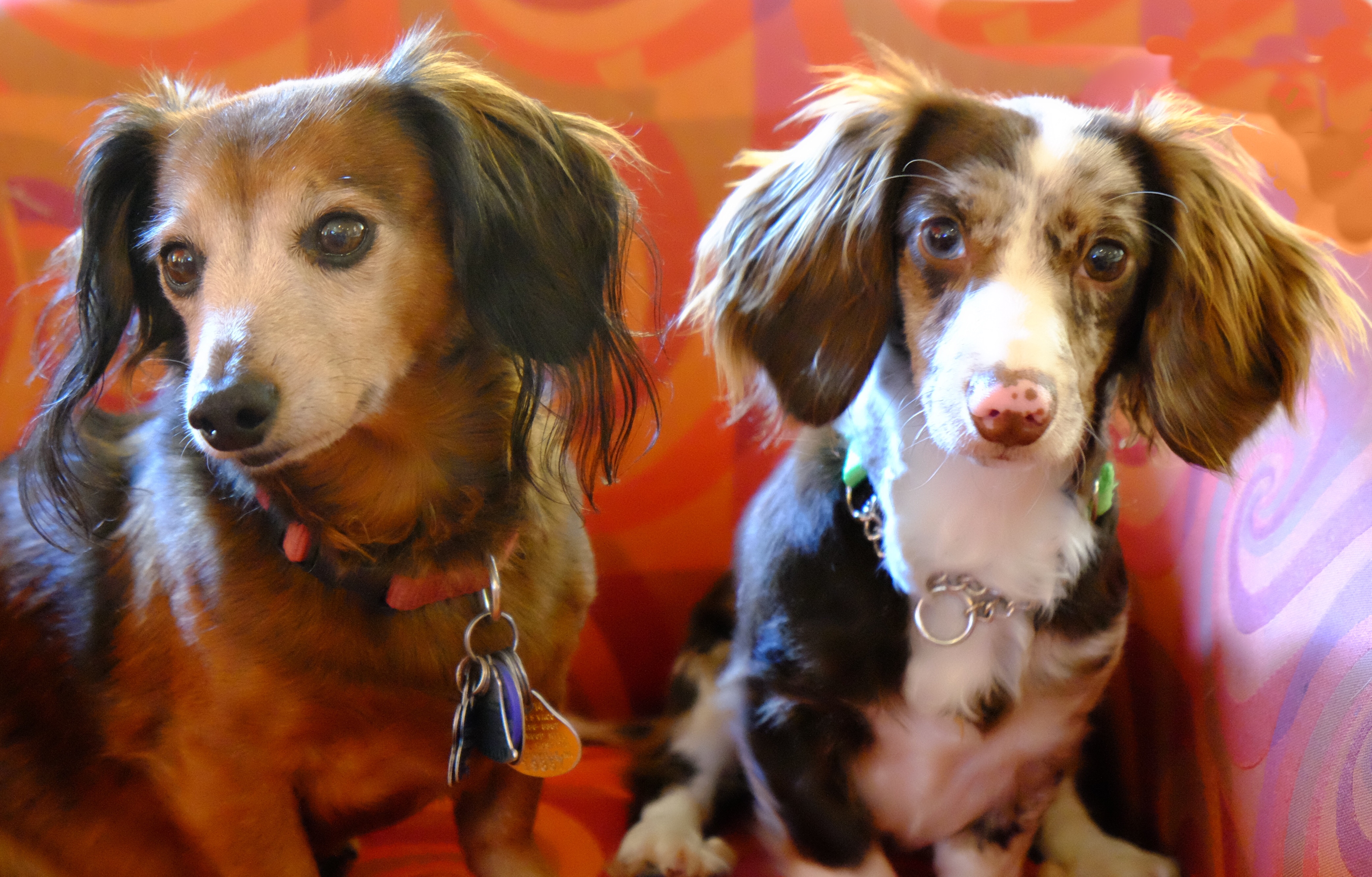 45 thoughts on “Life Turns on a Dime”