I’ve been on the road for the better part of a week, most of it battling either allergies caused by pollen (which is rampant in Arizona this spring) or a sinus infection. Not fun, so I’ve been advising attendees with suppressed immune systems to give me a wide berth. As per usual, I’m seeing lots of familiar faces on the road, but lots of new ones, too. So here are some of the high points.

On Saturday I arrived at the Sierra Vista Library parking lot early, so I pulled out my iPad to check my mail. There was an e-mail from one of my blog readers who, much earlier, had commented about losing a sister to opioid addiction. I had written back to her suggesting that she might find comfort in reading my book of poetry, After the Fire. She sent me a note saying that on that morning, she had come home from visiting her husband in the hospital and found her copy of After the Fire waiting for her. She sat down and read the whole thing from cover to cover. Her husband of almost fifty years is in the hospital in the last stages of dementia. He’s non verbal and no longer knows who she is. She told me that although the circumstances of our separate losses were very different, I had no idea what a comfort that book was to her that morning.

There is nothing that means more to a writer than knowing something you have written has had an impact on someone else’s life. So that morning, when I was feeling under the weather and being blue because I was on the road without Bill, her note to me was a real gift. We’ve exchanged several notes since then. She says that it hurts her to know that her husband has lost everything. It’s probably not nice to tell a new friend that she’s dead wrong, but I did. I wrote back and told her, “Your husband hasn’t lost everything. He still has YOU!” And it’s true. She visits him every day. Months from now, when readers of this blog encounter a particular scene in Sins of the Fathers, please know that my writing of that scene preceded our e-mail conversation by several weeks. Sometimes art imitates life.

I left Sierra Vista and went to Benson where I stopped in at the Horseshoe Café for cup of coffee and a piece of key lime pie between gigs. The Horseshoe still has wonderful horse murals on the outside of the building, but the ones that used to decorate the interior walls are long gone. I ordered my coffee and pie. When I went to pay for it, the waitress told me that the gentleman in the next booth had paid my bill. The “gentleman” in question, happened to be a Harley driving guy wearing a Trump 2020 T-shirt. You could have knocked me over with a feather.

I went from the café to Cochise Community College. One of the people there, the last one in line, was named Lester. He was 95 year old tall drink of water, a World War II vet wearing worn fatigues, who told me that he had been unloading bombs from a ship onto Okinawa when Tokyo Rose announced over the radio, the name of the ship and where it was docked, along with the name of the ship’s captain. That night a single bomber showed up, but instead of hitting the big ship, it took out their supply ship and blew a whole load of cigarettes and food into the water. Everyone on board figured the kamikazes would arrive the next day. Instead, Hiroshima happened and no more bombs fell on Okinawa. Lester was a farm boy from Alabama. He didn’t have much education but he knew how to put things together and make them work. After the war he was back home getting ready to open a tool and die company with his brother when someone from the federal government showed up and asked him if he’d come to New Mexico and work at White Sands. “I had to do it,” he said. “I owed those guys.” And we all owe Lester!

But why was he at the signing? He came carrying a worn copy of Second Watch, one he had gleaned from a Friends of the Library book sale. That’s the book that honors Doug Davis, a school mate from Bisbee who didn’t come home from the Vietnam War. “I wanted to thank you in person for writing this book,” Lester told me, shaking my hand. “It meant so much to me.” And meeting Lester meant so much to me!

On Sunday it was the Nanini Library. In the front rows were the usual suspects, including my favorite Tucson stalkers, Frank and Janice Molina. But in the back of the room was a whole group of Tohono O’odham from the reservation. (By the way, I never refer to the Reservation as the Res. I don’t feel as though I have the right to take that liberty.) So I noticed these folks sitting at the back of the room, and when I spoke briefly about my years of teaching at Sells and Topawa, they smiled, laughed, and waved. I used to tell 26 stories a week in k-6 classrooms, and because I’m tall and often wore a green dress on those days, the kids called me “the Jolly Green Giant.” On Sunday I told a few anecdotes about my life back then and my experiences on the reservation.

When the talk was over and it was time for the signing, I expected the TO group to slip quietly into the background. Instead, they came up to the table to chat, have their books signed, and take pictures. Rather than being shy and reticent, as I would have expected, they were anything but. One woman had left her daughter’s soccer tournament to drive 150 miles round trip to see me. I was truly honored. It’s been close to fifty years since I left the reservation, and yet my influence there lingers. What more could a teacher ever want?

Then came Monday. One of the things I like about the Tucson Festival of Books is the mixture of people on panels so that attendees have the opportunity to hear from established writers as well as emerging ones. One of those emerging Arizona writers is a retired Latina cop from Phoenix, Isabella Maldonado. We met two years ago at ThrillerFest in NYC and hit it off. She has three books out featuring a Latina cop named Veranda Cruz. When I knew I was going to be doing an event for Sun City Oro Valley, I suggested that Isabella and I do a joint appearance. Isabella is where I was back at the beginning, writing books with a young child—a nine year old son—at home. She couldn’t hang out after the event to visit because her son was coming home from school. Believe me, I’ve been there and done that! 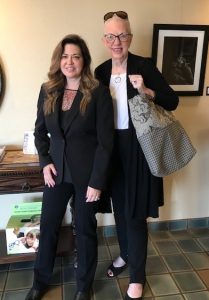 But why would I propose a joint appearance? Back when I was starting out—when I was the writer with one or two books out and two young children at home—who reached out to me? Two already very established writers whose names you’ll recognize—Ann Rule who wrote The Stranger Beside Me and Jack Olsen, the author of The South Hill Rapist. They were both true crime authors who were always careful to be seated with their backs to the wall and eyes on the entrance. The fact that they found it necessary to do so may have steered me away from writing true crime, but their help was greatly appreciated. And by giving Isabella a hand up, I’m thanking Ann and Jack. What goes around comes around.

It was a fun presentation. Our lives are very different and yet we share the basics. Isabella and I were both voracious readers as kids. I knew I wanted to be a writer the moment I encountered Frank Baum’s Wizard of Oz. For Isabella the tipping point was Madeline l’Engle’s A Wrinkle in Time. We both did other jobs to keep food on the table before starting to live our separate dreams. I taught school and sold insurance. Isabella was a police officer. We both appreciate hearing that the mysteries we write have made a difference for someone undergoing chemo! And when our talk was over, the 288 people in attendance that day, left the auditorium laughing and smiling. It was fun for us, yes, but it was also fun for the people in attendance.

So these are the high points so far. I just discovered that while I was writing this, I lost track of time and missed breakfast. So now I need to get on the road and find some breakfast on my way to Mesa. I’m not going to attempt to do the Red Mountain Library on an empty stomach!