It’s Wednesday.  With my son, Bill J., at the wheel, we’ve just left Phoenix heading for an event in Sierra Vista followed by two events in Bisbee, Arizona, my home town, where the mayor has declared September 23rd to be J.A. Jance Day.  I guess that means you really can go home again!  But as we drive through the flat dry desert of the Gila Reservation, it’s hard to imagine that it rained last night.  Maybe not right here, but certainly in places all around here. 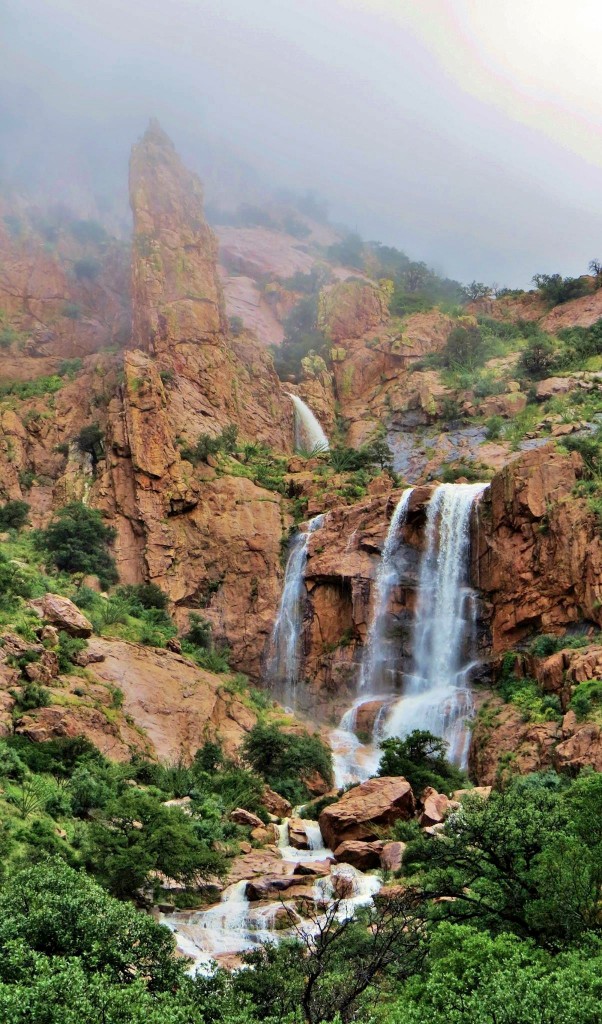 Like in Bisbee, for example.  The picture accompanying this blog, shot by former Bisbeeite Everett Wittig, was taken the day before yesterday when a late summer monsoon dumped more than an inch of rain on Bisbee and its surroundings.  The water is flowing down off Juniper Flats in an area of the Mule Mountains called the Divide.  People who live in other parts of the country often think of Arizona as a vast sand dune punctuated by the occasional saguaro.  The lush green area pictured here is less than a hundred miles from Tucson, and you’ll notice there isn’t a single saguaro in sight.

So as we take this little four hour jaunt toward Bisbee, I’m doing a meditation of sorts, on some of those Bisbee folks who made a huge impact on my life.

First and foremost, there’s LaVerne Williams.  She’s somewhere north of 90 now, but I’m sure she’ll be in attendance tonight at Central School.  She was my Sunday School teacher at the Warren Community Church where she was also the junior choir director and the mover and shaker behind countless Christmas pageants.  Along with her partner-in-crime, Rose Bennett, LaVerne served as my Girl Scout leader from Brownies through Senior Scouts.  Occasionally I hear from fans who have visited Bisbee and stopped in at the Bisbee Museum where LaVerne still serves as a docent.  Believe me, the folks who talk with her come away from the museum having learned far more about Judy Busk Jance than they EVER wanted to know.

The teachers in the Bisbee School District back then were exemplary.  Mrs. Spangler fueled my love of reading and set me on the path to becoming a writer.  Anthony Nadolski, my school principal for most of those years, was by far the best school principal I ever met.  Mrs. Medigovich, the senior English teacher, scared the daylights out of all of us, but she also challenged us to do our best.  An A in “Medi’s” Senior English was my ticket into honors English classes at the University of Arizona.  And a note from Mr. Guerra, my Latin II teacher, written in red pencil at the bottom of the page on my paper about Servius Tullius read, “Research worthy of a college student.” That was the first hint from anyone in my life that I might be college-worthy.

And then there was Mrs. Riggins.  She was my home room teacher in high school, my journalism teacher, and the advisor for the school newspaper, the Copper Chronicle, when my friend, Pat McAdams Hall, and I were co-editors.  She had the patience of Job, and I still remember that her nails were always perfectly manicured.  All through college and even after I graduated, I would stop by to visit with Mrs. Riggins when I was in town during school breaks.  Once I started teaching, she never failed to ask me how things were going.

My second year at Pueblo High School, I was assigned to the afternoon shift, teaching English to sophomores in seventy minute classes, four days a week.  One of the students, Fernando Camacho, was driving me nuts.  He was a long, lanky, surly kid who would saunter into the classroom after the bell and then, rather than going straight to his desk, he would meander over the the pencil-sharpener and endlessly sharpen his pencil before finally taking a seat.  Flopping into his chair, he gave every indication of being bored to tears, and he never once turned in any work.  By the time Christmas vacation rolled around, I was well on my way to flunking him.

When I went to see Mrs. Riggins that year and she asked how things were going, I told her about Fernando.  At the end of my tale of woe she said, “If Fernando is failing as a student, then you are failing as a teacher.  If he’s coming into your classroom every day and not paying attention to you, he must be paying attention to something.  You need to find out what’s on his mind.  Make an appointment to talk to him—not in the classroom or in your faculty office—somewhere that’s neutral ground, and try to find out more about him—his interests, his life, whatever.”

Having been given that sage advice, I went back to school after vacation and did just as Mrs. Riggins suggested.  I made an appointment with Fernando in the school parking lot where we talked for some time.  In the course of that conversation I learned that he was a drummer who spent his weekends playing with various bands around town.  When we left the parking lot, I took him to the library and found him a biography of Gene Krupa.  He read it and wrote a report on it—the first book report he EVER did!  And I didn’t flunk him, either.

Years later, while we were teaching on the reservation, my former husband went to town to get a haircut at a local barber school.  When he came home, he said, “I met one of your former students at the barbershop today.”

“Not Fernando Camacho!” I said, but it was.

As the barber was doing the haircut, he asked, “Didn’t your wife used to teach at Pueblo?”

Janc allowed as how that was true.

“She was the best teacher I ever had,” Fernando said.  “She made a huge difference in my life.”

Thank you, Mrs. Riggins.  Fernando may have given me the credit, but Rachel Riggins is the one who deserved it.  She saved Fernando Camacho by remote control.

And thank you, Bisbee, my home town.  It turns out I really can go home again.  It’s terrific to be honored this way, but if I hadn’t been going there today, I wouldn’t have been thinking about Mrs. Riggins and Fernando Camacho, and I wouldn’t have told you about them, either.

11 thoughts on “Going Back to Bisbee”