Last week, when I was writing the blog, it was all about the heron.  I truly appreciate all the suggestions people have sent me for fixing the problem.  We’ll be deploying several of those strategies in the next few days.  I’ll let you know how it goes.  But since it’s Mother’s Day right now, I’m going to go ahead and write about a mother I never knew.

It’s Mother’s Day morning as I write this.  Bill and his older son, Bill J. are out in the kitchen getting the ribs doctored and ready to go into the oven.  Yesterday, when Bill J. drove over from Spokane, he arrived with two wonderful hanging baskets of flowers that are now out on the patio.  Yesterday and the day before, his brother, Tom, came over and helped Bill repaint my iris statue.  It’s about six feet tall, made out of iron, and weighs a lot!!!  We bought it in Tucson several years ago.  When the paint on it started to rust away, we went back to the manufacturer only to discover he was out of business–for good reason, it turns out.

A year and a half ago, we took the rusted remains to a company in Tucson.  They powder-coated the whole thing a deep shade of green.  There’s something about an all-green iris that just isn’t right, so Tom and his dad teamed up to turns the green blossoms into something a little more irisy, if you will.

This afternoon Bill’s daughter, Cindy, and her family will come over from Silverdale.  With our daughter and her son, Colt, we’ll have a full house to celebrate Mother’s Day.  The menu includes family favorites of ribs, Bush Beans, potato salad, and pecan praline cake.  But there’s someone who will be missing from the celebration, and I think now is a good time to acknowledge her– Lynn Schilb, the woman who was Cindy, Bill J., and Tom’s mother.  Their real mother.

I started to write birth mother, but in a family where adoption plays an important role, that term implies someone who left the scene very early in the child rearing process.  That was not the case with Lynn.

She was in the mothering business for the long haul.  She battled breast cancer for seven years and was gone before I ever came on the scene.  When Lynn died in late December of 1984, her younger son had just graduated from high school and her daughter had just graduated from college.  Over Christmas vacation that year, she met the young man who would become Cindy’s husband and who is the father of two of our five granddaughters.  Even though she was terribly ill, Lynn had a chance to meet Jim.  She knew that Cindy and Jim were engaged, but I was the one who, five months later, would serve as MOTB (mother of the bride) when the two of them got married.

Lynn missed that.  She missed seeing her two sons graduate from college.  She missed seeing her amazing collection of granddaughters–the three gorgeous six-footers who are Bill J.’s and the two budding gymnasts who are Jim and Cindy’s contribution to the family.  She’s missed all the Christmases with that whole crew of grands tearing into their presents.  She’s missed Easter Egg hunts where the dogs found more of the eggs than the kids did.  She’s missed being on a Disney Cruise with the whole crew in tow.

What didn’t she miss?  She didn’t miss having three little ones under the age of five.  She didn’t miss chasing after those little guys, feeding them and changing countless diapers, while their dad had a full time job at Motorola and a part time job teaching, all while working on an MBA.  Those had to have been tough years.  I know Lynn’s mother lived nearby when the kids were little, but I have a feeling most of the child rearing responsibility landed squarely on Lynn’s shoulders, and I’m here to tell you, she made an excellent job of it.  I know it wasn’t easy, and I know she had her trials.  Bill and Tom were almost adults when I met them, but they were still a handful.  What they were like when they were eleven and twelve?  I don’t even want to think about it!!

For the better part of the last thirty years, I’ve been lucky enough to reap the rewards of Lynn Schilb’s motherly labors.  I can testify to the terrific job she did, and that’s why I’m raising a glass to her today.  Her kids may be my kids for now, but the way she raised them counts, and her presence is still an important part of all our lives.

So let’s hear it for Lynn Schilb.  Hear, hear!! 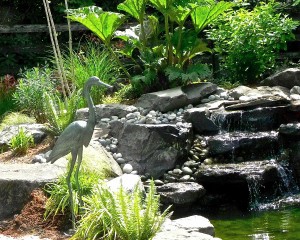 Our new statue of a heron – keeping the pond safe.

P. S.  I wrote the blog during the quiet time after the cake was baked and before company descended en masse.  We had our family gathering and enjoyed the meal.  Then as evening descended, people went out into the yard and migrated down to the ponds where they sat and watched the fish, including the hundred new thirteen cent ones that we brought home from PetsMart on Friday morning.

They were out there for the better part of an hour.  Right at the end, Colt came running inside to tell me, “Grandma, The Big Guy is back.  And he was.  He managed to elude our visiting heron.  Big Guy’s back!!!

On a day where there were plenty of blessings, seeing him again, after his being invisible for the better part of two weeks, was the capper on the jug, but the heron statues are coming anyway.